Toronza "Tee" Cozart was never interested in opening a restaurant. In fact, she wasn't all that interested in food, period, which is how her Breckenridge Hills spot, TKO Grill, came to be in the first place.

A hairstylist by trade, Cozart was so busy running TKO Salon and doing her customers' hair that she never made time to eat. Her mother, Margaret Forrest, did what any protective mom would do and took matters into her own hands, bringing Cozart home-cooked meals to the salon so she could eat between appointments. The problem for Cozart was that there was no time between appointments. She was perpetually booked, and when she wasn't, she was attending to the other responsibilities that came with running a salon.

Not one to see food go to waste, Cozart offered her mom's meals to her co-workers. They loved Forrest's cooking so much that they began to ask for it. Eventually, the salon's customers caught on, and they began to order it as well. Even non-customers heard about the food, and they'd stop by the salon to place orders, too. One thing led to another, and, just like that, Cozart was running a bona fide takeout operation out of her hair salon. 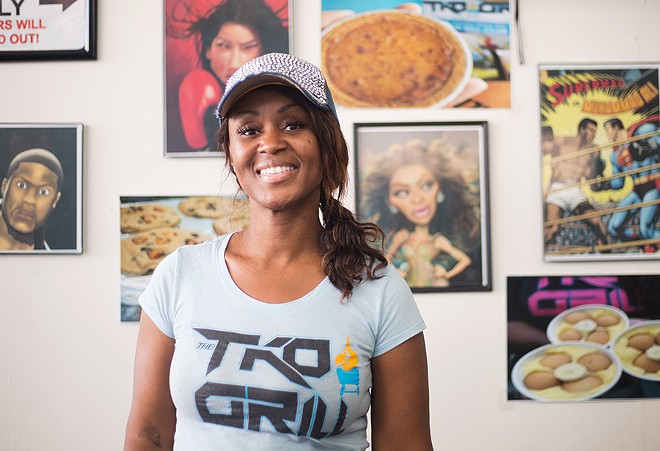 When Forrest left St. Louis for North Carolina, Cozart wanted to carry on her food legacy — besides, her hungry co-workers and customers wouldn't have let her live it down if she stopped offering the food they'd come to love. She had the know-how; the dishes her mom had been bringing in were based on old family recipes Cozart grew up eating and learning to cook. Seeing that her customers remained satisfied once she'd taken over the cooking, Cozart decided to take the leap and open a standalone restaurant when the building next door to the salon became available.

Cozart opened TKO Grill in September 2016, naming it after the salon where it all began. You'd assume that there is a boxing connection in the Cozart family, considering not only the name of the salon and restaurant, but also because the dishes bear names like "the Heavyweight" and the "Right Hook." Even the restaurant — a counter-service operation simply appointed with black leather banquettes and brown lacquered tables bearing its logo — has a significant boxing theme. The walls are covered with framed caricatures of local and national celebrities outfitted like they are about to step into the ring. 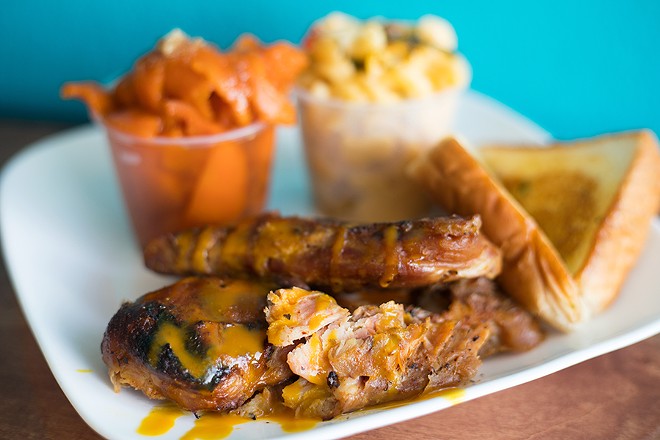 The reality is less sexy: Cozart took over an already-named TKO Salon and simply liked the sound of it. However, Cozart likes to joke that she kept the name because she wanted to "knock out her competition," and her signature dish, the turkey ribs, does just that. Despite the name, the meat is not, in fact, a rib but a cut off the turkey shoulder, around the scapula. The result is a shockingly succulent piece of meat that is shaped like a flattened pork rib and smoked over fruit wood that brings out the turkey's subtle sweetness. Cozart drizzles the meat with "TKO Sauce" that is a cross between a vinegary Carolina barbecue sauce and sweet honey mustard. She's restrained in how much she uses, however, simply drizzling the turkey with the sauce rather than smothering it. This allows the delicious, lightly smoked meat to remain front and center. 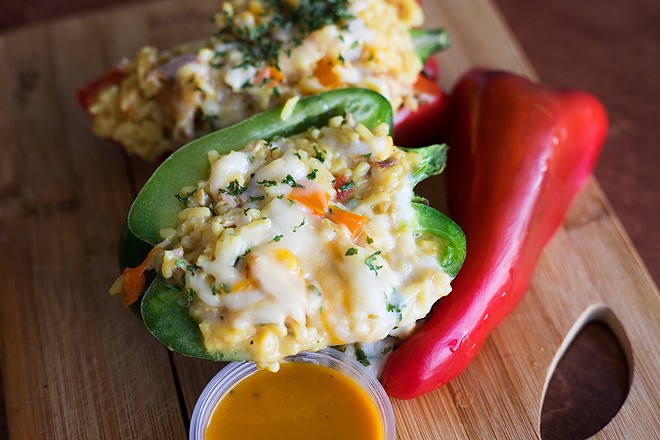 The "ribs" are not the only turkey dish that Cozart successfully prepares. Her pulled turkey, called the "Haymaker," is also outstanding; infused with sweet wood smoke, the juicy meat is piled atop a buttery griddled bun and finished with just a dash of "TKO Sauce." The restaurant also offers a well-executed turkey burger. Thick, juicy and kissed with a whisper of black pepper spice, the meat is flavorful on its own but can be topped with tangy barbecue sauce, cheese and an onion ring for a more steakhouse-style offering. The only problem is that the bottom bun crumbled apart, rendering it difficult to eat. I gave up and enjoyed it as an open-face, knife-and-fork endeavor.

Wings, or "the Knockout," are simply seasoned, smoked and finished on the grill, giving their tender flesh a touch of bittersweet char. Served skin-on, the exterior slightly crisps up, while inside, the meat remains juicy. This is a straightforward dish, but the flawless execution makes it transcendent. 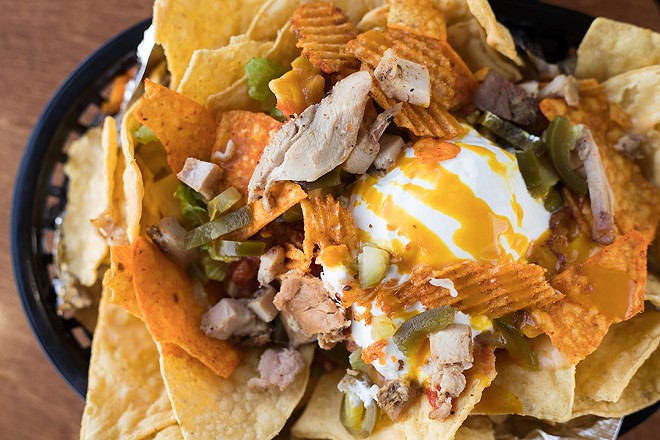 TKO Grill devotes a good portion of its menu to "kitchen sink" comfort food dishes such as the massive loaded baked potato smothered in bacon, turkey, nacho cheese, mushrooms, olives, salsa, jalapeños and sour cream. A loaded quesadilla, filled with molten cheese, ground beef and turkey sausage, is equally indulgent. Though I preferred the more nuanced dishes like the wings and turkey, these intentionally hot-messes seem tailor-made for a hangover or post-breakup meal.

I was surprised by how successful a smokehouse like TKO Grill is at making pizza, in particular its barbecue chicken version. The St. Louis-style thin crust is smothered in a sweet and tangy barbecue sauce, then covered in tri-colored bell peppers, smoked chicken and mozzarella cheese. It's as respectable a take on the barbecue pie as it comes. 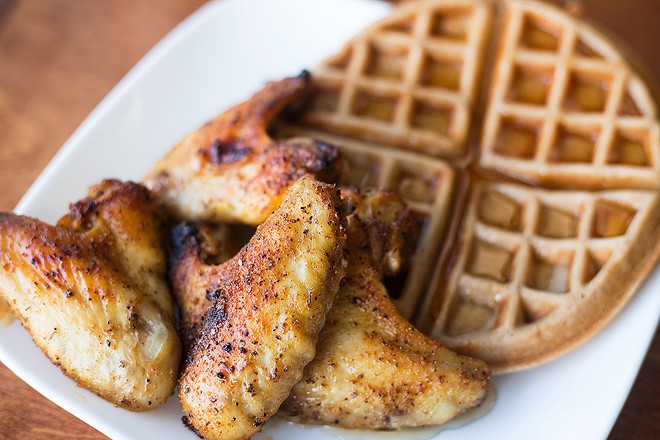 Cozart's classic soul-food side dishes are one of the restaurant's brightest spots. Her green beans are soaked in a turkey- and white-onion-infused cooking liquid that gives them just a touch of smoky flavor. Mac and cheese is a marvelous, gooey concoction of cheddar cheese and bell peppers with just a whisper of sweetness — an old family secret. Mashed potatoes are unlike any other version I've had and are akin to a warm, less vinegary German potato salad, but it's Cozart's baked beans that steal the show. Sticky with brown sugar and spiced with peppers, this hearty side dish rivals any pit beans in town. 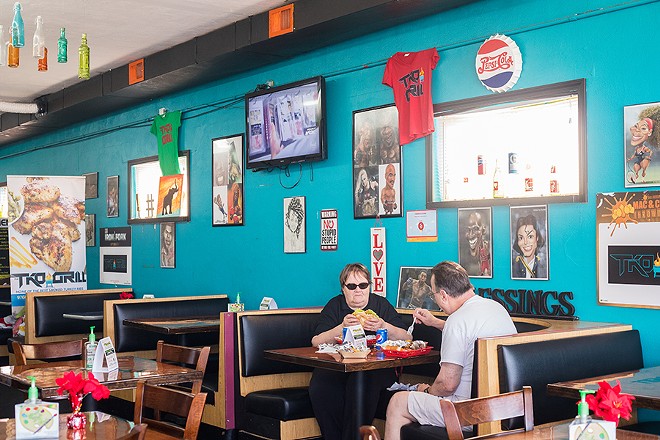 You'll be tempted to ask for a double order of those beans, but resist that for the fall-spiced sweet potato pie or peach cobbler cake, which is basically a juicy peach version of a pineapple upside-down cake. And if there is one thing just as popular as TKO Grill's turkey "ribs," it's the banana pudding, which is positively silken and accompanied with vanilla wafers for dipping.

When you taste that banana pudding — or the turkey "ribs," or the wings — you understand why folks begged Forrest to keep coming back to the salon for more. In fact, the only thing you don't understand is how Cozart was able to pass on her mom's delectable cooking in the first place. It's a good thing she did, though: If she had kept it all to herself, we may not have this delightful little eatery. That would've been a punch to the gut too unbearable to sustain.