St. Louis is a fantastic town for donuts, and the charm of the local shops is as varied and delectable as the pastries steaming atop their racks every morning. Why stick to the Dunkin' Donuts or Krispy Kreme on your way to work when you could buy a much better donut for a lot less money?

We've created a twelve-stop donut pilgrimage that will take you from south city to downtown to Clayton to Maplewood, visiting the area's gamut of independently owned donut shops along the way. Keep in mind that several of the shops do close at noon, and some are closed altogether on Monday; completionists attempting to knock out the whole list should aim for a day other than Monday and should get on the road before 9 a.m. (Bonus: The earlier you leave, the fresher the donuts will be!) Bring cash, as not all the stores accept credit cards.

Hitting all twelve will require an early start and about four hours total — and the capacity for an incredible amount of fried dough and sugar. But we did it, and lived to tell the tale. So too can you.

You can start anywhere on this route (it comes full circle, sort of), but for simplicity's sake we'll start in south city at Eddie's Southtown Donuts (4701 South Kingshighway Boulevard, 314-832-1200), where the smell of oven-hot treats starts wafting through the air before sunrise each day. Open from 5 a.m. to noon, the offerings at Eddie's veer from the classics to more adventurous items such as cheese pockets and fruit pies.

From Eddie's, set a course toward the industrial edge of Soulard and an establishment that doesn't know the meaning of sleep. Open from 11 p.m. to noon, John Donut (1618 S. Broadway, 314-241-3360) is known for its odd hours, sumptuously soft donuts and an apple fritter that will make your soul briefly leave your body.

Let the Gateway Arch guide you to your next destination, to downtown favorite Pharaoh's Donuts (200 N. Seventh Street, 314-351-0285). Observe owner Amon Aziz or one of his staffers pull and cut dough on the counter. Take time to consider how something as simple as dough can be transformed into flawless glazed donuts.

Bid the Arch farewell, hop onto Interstate 44 — when pronounced with a mouth full of donuts, it really does sound like "farty four" — and get some cash ready for a stop at World's Fair Doughnuts (1940 S. Vandeventer Avenue; 314-776-9975). More than 30 years of wisdom are baked into this beloved St. Louis institution, and that history is immediately apparent upon the first crumbly, flaky bite of a buttermilk cake donut. Bonus: The prices haven't changed much in 30 years, so you'll probably end up spending just a few bucks for a tasty haul.

Only a few minutes down Vandeventer lies yet another member of St. Louis' pantheon of old school, cash-only donut shops — and the pedigree is right in the name. O'Fashion Donuts (5120 Southwest Avenue, 314-772-0398) may not look like much from the outside, but behind the Elvis posters gracing the windows is a trove of time-honored favorites, where chocolate and vanilla long johns hold court with the customer favorite, plain glazed. Grab coffee in a Styrofoam cup and munch your donut stash on the drive to Clayton. 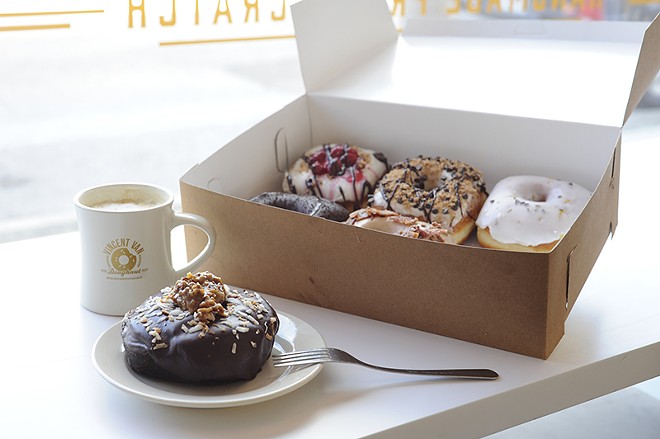 After a succession of classic donut dives, Vincent Van Doughnut (40 N. Central Avenue, Clayton; 314-899-9500) will feel like walking into a modern art gallery. The unique creations will set you back three bucks a pop, and the dreadnought-sized donuts are so hefty that you'll be tempted to share — but once you bite into that fluffy lemon lavender or cookies and cream, you'll want to keep that distinctive '"squared circle" donut all to yourself.

From Clayton, cruise south, taking Brentwood Boulevard along Shaw Park until you arrive in the tidy Brentwood strip mall containing Ray's Donuts (2542 Brentwood Boulevard, Brentwood; 314-962-6210). Open 'til noon on weekdays and 1 p.m. on Sundays, Ray's boasts more than 50 varieties of donuts, sorted into categories that include classics, cakes, Bismarcks, bars and twists.

After you get a few, say goodbye to Ray's and hang a left onto Manchester Road. After a few minutes of southbound driving you'll come to a closet-sized storefront in Maplewood known as Strange Donuts (2709 Sutton Boulevard, Maplewood; 314-932-5851). Although you can get by with the $1 classics and $2 "creations" (like the to-die-for Gooey Butter), the truly adventurous will pony up for a $5 "Stranger," the shop's weekly special that combines foodstuffs you never knew belonged on a donut (think: meat, cheese, even veggies). There's also good news for all you late-night munchers: The shop is open 'til midnight Thursday through Saturday.

OK, you've made it to the final stretch; don't bow out now. The next stop will take you back to south city and a traditional donut shop experience. Look for the distinctively retro sign for Donut Drive-In (6525 Chippewa Street, 314-645-7714). Closed on Mondays, the Drive-In is a cash-only donut dive that serves up homestyle favorites, but even the basic chocolate frosted and buttermilk will leave you panting for more. (Insomniacs take note: On Friday and Saturday, the doors stay open until midnight.)

From there, get on Hampton Avenue and chart a southernly course to the St. Louis Hills Donut Shop (6917 Hampton Avenue, 314-481-6050), a squat green building that is home to more than two decades of doughnut excellence. The glazed donuts melt wonderfully in your mouth, but there's more than enough variety to keep things interesting, including a turtle old fashioned with caramel and almonds. There's also the unique cheese flip, which is a fusion between Danish and a donut that may push your appetite to the breaking point.

Don't give up! Get back on Hampton and take in the glorious sights (and smells) of the River des Peres, and then hang a left onto Morganford until you spot the distinctive purple cone that sits atop the Donut House (8500 Morganford Road, 314-638-5828). Open 24 hours a day, seven days a week, the shop is usually well-stocked with a variety of fluffy and light donuts. Rumor has it that most orders come with a handful of donut holes thrown in for good measure.

Finally! One last stop before you call it a donut day. Head south for ten minutes on Interstate 55, which should provide a sufficient breather before tackling the criminally delicious wares at Ex-Cop Donut Shop (4584 Telegraph Road). Note that the shop is closed Mondays, open only until noon Tuesday through Thursday and then until 2 p.m. on the weekends. But if the timing works out, and you've been holding back until now — as your attorneys, we advise you to plead guilty to consuming several bites of the shop's infamous "Sweet Apple Wood Maple Bacon" donut. Donut justice will be served.

Waddle your way back to your car with a few long johns for the road, and make sure to thank your courageous stomach for the past hours of commendable service. Congratulate yourself on a day of donuts done right... and maybe think about taking a jog tomorrow.