He Left St. Louis a Rock Star -- and Plunged Into a Nightmare

When Jason Holler and his wife Kate packed up and moved to Austin in late 2014, they knew they were in for some big changes. Just months before, Holler had performed with his group, Kentucky Knife Fight — a St. Louis favorite, and recipient of many music awards from this publication — for the last time. A south-city lifer, Holler knew that moving some 800 miles away was sure to take some adjusting. And, of course, there was the baby on the way, whose impending arrival served as the impetus for a move closer to Kate's family.

"The band was done and we came here, and I was kind of going through a bit of a crisis, like an identity crisis, kind of existential," Holler, 34, says. "You know, 'Who am I now that I'm no longer in this group?' That's how I was often identified by, living in St. Louis. My friends aren't here, my family isn't here, I feel very alone. I don't have a job really, I don't know what I'm going to do now and I have a kid on the way. Who am I creatively? Because I've always been a creative person; I've always identified that way."

On March 25, 2014, that uncertainty melted away with the birth of the couple's daughter, Rowan Splendoria Holler. Says Holler, "It just was no longer important."

It's a common thread among new parents, who suddenly realize at the sight of their new child that they're no longer alone in the world, no longer looking out primarily for number one. It's beautiful, really.

But in the Hollers' case, there was an additional reason to drop those more trivial concerns.

Within only a few days, Jason and Kate began noticing blisters on Rowan's body. They brought the wounds to the attention of the attending pediatrician, who was concerned enough to send the child to the hospital's neonatal intensive care unit. There, a slew of medical professionals including a children's dermatologist and an infectious disease doctor crowded around the newborn, trying to determine what was wrong. The dermatologist was the first to mention something called "E.B.," but she cautioned the new parents not to Google it.

"Which is a mouthful when you first hear it," Holler says. "Then it just rolls off the tongue."

Only about 200 babies are born with the disease each year. Such is its rarity and severity that the condition is often referred to as "the worst disease you've never heard of." Those who suffer from E.B. have abnormally thin, tissue-like skin that tears easily, causing severe pain and leaving blisters on up to three-fourths of a patient's body. Babies who are born with it are often called "butterfly children," as their skin is said to be as thin as a butterfly's wings. At present there is no cure, and those with the disease have a life expectancy of about 30 years old.

Just like that, Holler's identity crisis promptly came to an end.

"I found an identity as Rowan's dad," he says. "As somebody who's gonna advocate for her and all these other kids like her." 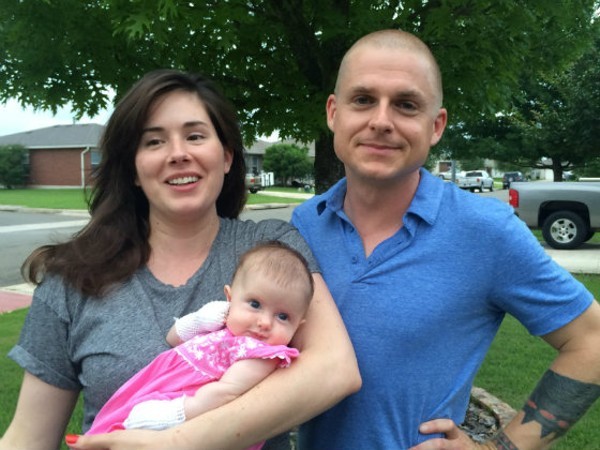 On a typical day, Holler works at the airport (he's a ramp agent for Southwest Airlines), often pulling twelve-hour shifts and clocking out near 2 a.m. before heading home and catching some rest. At 7 a.m. he gets up and begins Rowan's day with a round of medication and breakfast, which is administered through a feeding tube — E.B. affects even the inside of the mouth and esophagus, resulting in painful blood blisters that used to cause Rowan to refuse to open up for medicine or food. The tube solved that.

On Mondays, Wednesdays and Fridays, a nurse helps Kate with the arduous process of bathing Rowan and changing the bandages that cover nearly her entire body. Holler is often tasked with switching out all the bedsheets in the house while Kate and the nurse attend to the bath.

"We have to keep things very clean to cut down on the risk of infection," Holler says, explaining that infection can be fatal for children with E.B. "Infection is always something that's on our minds. She's probably been hospitalized maybe ten times in the last three years."

The bath and bandage process can be grueling, Holler says.

"It can be really brutal, just at this age right now, because she's three years old," he says. "So trying to get a toddler to cooperate with you when you're doing something that they're afraid of and they really don't want to do, and they're thrashing about and moving around — it actually injures them more.

"I remember saying the first time that it's like a nightmare, and I had felt bad about calling it that because it's the world that my daughter lives in," he adds. "But any dream that you would have where your kid's skin would just come off their body — I mean, you would call that dream a nightmare."

Rowan sees six or seven different specialists each month, Holler says, and is currently on more than a dozen medications. So frequent are her doctor visits that the family moved to an apartment within walking distance of Austin's Children's Hospital as a time-saver. The home is also near a children's museum, some parks and a public library. On Tuesdays and Thursdays — off days from the bath and bandage routine — the couple often takes Rowan somewhere to have fun.

Though he remains a staunch advocate of St. Louis, one with frequent Southwest Diner cravings, Holler says that the health services and overall arts scene in Austin are ideal for Rowan.

"I love that my daughter is growing up in Austin, just to give her that kind of experience," he says. "I think in a lot of ways it's just such a different environment, a different place than just about anywhere else."

That's not to say he doesn't miss parts of his life in St. Louis as a regional rock star. But with Rowan, his priorities have shifted entirely. Sometimes, the change you get is not the one you were expecting — and that's OK. You find the strength when you need it, and what may have once seemed unfathomable becomes the life you live.

"I was joking with Curt [Brewer], who used to play in Knife Fight — he was our other guitarist — and I said, 'You know, there was a time where the biggest concern in my life was whether or not you're gonna make it to the van on time,'" he laughs. "You know, for us leaving for tour or whatever, like, 'Is Curt gonna be here late again' and all these concerns I had in regards to the band.

"A lot of luxury problems, a lot of very narcissistic things that I kind of toiled with for a while with the group — it just seems so funny now."

Jason Holler is profiled as part of our Change Issue. Check out all the great profiles online here. For more information about Epidermolysis Bullosa, or to donate money toward a cure, visit ebresearch.org.