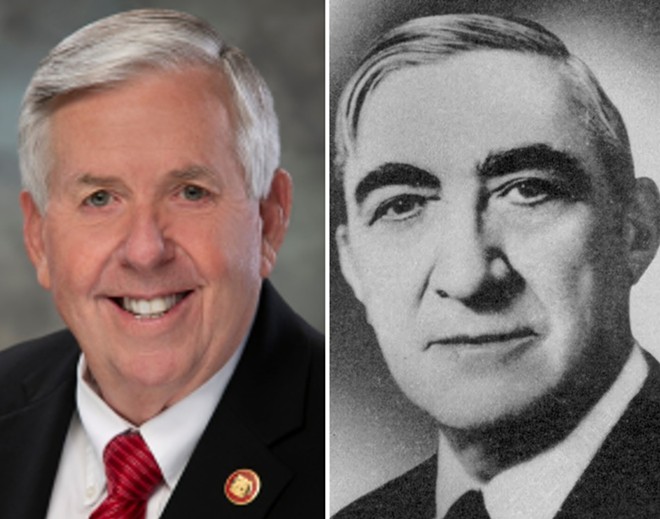 On December 19, 1949, the governor of Missouri made a stand against homosexuality.

Governor Forrest Smith announced that he was refusing a California extradition request for a Missouri woman facing kidnapping charges filed against her by her own daughter. That’s unusual but wasn’t half of the story.

It turns out that 28-year-old Bernice Hough had been drugged by her mother and two men in a Los Angeles doctor’s office “to get her away from homosexual influences” in LA and return her to the mother’s home in Springfield. Hough said she woke up handcuffed in the backseat of a car headed back to Missouri.

About a week later, Hough made it back to California somehow, but filing those charges proved futile. The governor of Missouri was having none of it.

Here’s how the Associated Press reported the story:

“Missouri’s Gov. Forrest Smith refused today to send a ‘broken-hearted’ Springfield [woman] to California to face kidnapping charges brought by her daughter. Smith said it looked to him like a family affair and ‘no useful purpose would be served’ by ordering the elderly woman’s extradition.

“The mother, Mrs. Ethel Magers, testified in an extradition hearing [in Jefferson City] that she went to Los Angeles to get her daughter away from homosexual influences. She said she and her husband, Roscoe Magers, and Herbert Stubblefield brought [Hough] back to Springfield, but they did not use force, she declared.”

The AP report stated that Hough alleged her mother took her to a West Covina, California, doctor’s office “where she was given two hypodermic shots. When she recovered consciousness, she alleged, she found she was handcuffed in the back seat of Stubblefield’s car on the way to Springfield.

“James Meredith, the governor’s legal secretary, said the extradition was denied because ‘it doesn’t make sense that the mother should be tried for kidnaping,’” the AP reported. “She only did what she thought was right in her own mind.”

Meredith also noted that Magers previously had gotten an audience with Smith “seeking his aid in the freeing her daughter of the homosexual influences in California. He described Mrs. Magers as a ‘good Christian mother.’”

Presumably that was the end of it. But flash forward 72 years, and here’s Governor Mike Parson channeling his inner Forrest Smith to make a Christian stand against homosexual influences. Only the vernacular has changed.

Parson removed an exhibit from the state capitol three weeks ago because it featured the history of the LGBTQ movement in Kansas City. The exhibit, created by historians at the University of Missouri-Kansas City, recounts the role city residents played in that movement.

There’s a simple explanation for this: Republican cancel culture. The mere mention of LGBTQ beliefs and accomplishments constitutes rampant immorality in the narrow minds of social wingnuts. This is bigotry, uncut and unapologetic.

Parson — who as a state senator voted for some gay-rights protections and had signaled in 2018 he wouldn’t oppose them as governor — seems to have had a change of heart. Or perhaps, in the current political climate, he simply lacks the spine to stand up to some of the worst in the residue of the Republican Party. The anti-LGBTQ bigotry is far more despicable in 2021 than it was in 1949. In Smith’s case, it can at least be rationalized by the context of the times in which he lived that the governor would block the extradition of the “good Christian mother.” What’s Parson’s excuse?

Senator Greg Razer of Kansas City, the only openly gay member of the state Senate, rightfully called it out.

“This display was supposed to be up until December 26 [and] made it all of four days before some members of the legislature threw a fit and DNR apparently acquiesced to them and took it down and literally put my history back in the closet,” Razer said.

It is true that Parson did not act alone. At least two Republican legislators expressed their indignation to him that “the gay agenda” was on display at the exorbitant cost of several taxpayer dollars. Some bottom-feeder legislative staffer proclaimed “To God be the Glory!” upon learning that the exhibit would be moved down the street to a less-traveled building. God help him.

Personally, I wish someone at UMKC had stood up to Parson and taken the exhibit home rather than suffer the indignation of having it closeted in an inferior location. UMKC has justifiably taken its fair share of hits for lacking the courage to stand up at all to the bigotry. But perhaps it’s something to do with not biting the hand that feeds you, the bane of the university’s existence for decades.

In any event, it’s pretty pathetic. Same-sex marriage was made the law of the land by a conservative U.S. Supreme Court, yet the hatred burns on. And it’s no consolation that Missouri is hardly alone among red states in perpetrating bigotry against its own citizens.

Perhaps the telling contrast between Governor Smith in 1949 and Governor Parson in 2021 is how much more candor people got from Smith. In his day, Smith’s spokesman had no problem whatsoever just telling it like it was: The governor wasn’t going to allow his friend to face justice for kidnapping her daughter because he was cool with it. He didn’t follow the law because he didn’t want to. Contrast that with the verbal gymnastics of Kelli Jones, Parson’s spokesperson, as reported by the Kansas City Star.

“Jones said DNR removed the exhibit because the ‘statutorily mandated process’ for putting up temporary exhibits in public buildings was not followed. She said Parson was not aware of the exhibit, but his office received ‘several complaints’ about it.”

He may have received complaints, but none of the rest was remotely true. There is no such process, at least not one that has been followed in recent decades. And even if Parson had somehow not been aware of the exhibit — which is unlikely at best — he most certainly knew about it before making the call to shuffle it out of the capitol.

Whether Jones — and Parson — was misinformed or lying is of no significance. What matters is that their word cannot be trusted, not even a little bit.

Smith hailed from Ray County, which today is viewed as part of the Kansas City metropolitan area, ironically enough. But he probably wasn’t part of the exhibit on Kansas City residents who had contributed to LGBTQ progress.

In a way, that’s too bad. Whether they like it or not, Governors Forrest Smith and Mike Parson are linked in an important way: They’ll both always be part of gay history in Missouri.