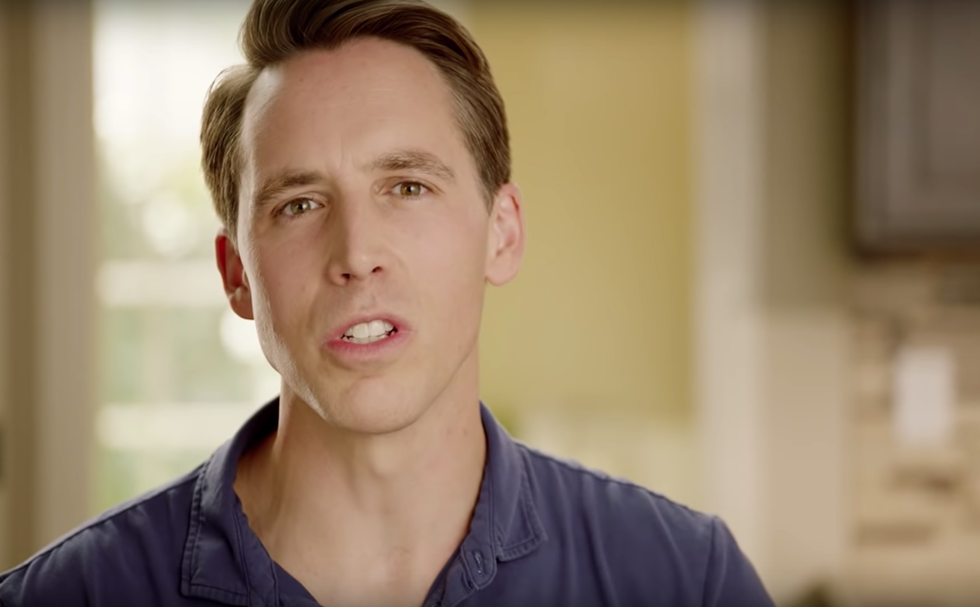 In Josh Hawley's first campaign for public office, he provided the world with a glimpse of who he is.

Hawley was facing off against state Senator Kurt Schaefer in the 2016 Republican primary for state attorney general. He would tragically win that contest and the general election that fall. And one of the nation's creepiest political beasts was unleashed.

In retrospect, Hawley's first splashy political TV commercial in July of that year was an ominous glimpse at the black hole inside Hawley where normally resides a soul. With the assistance of the "Tea Party Patriots," Hawley attacked Schaefer with an astonishingly xenophobic slander.

The ad, titled "Stop Helping the Chinese Buy Our Farms," depicts a moblike Chinese businessman in dark glasses — along with his naive attaché — speaking in Chinese. As he emerges from his limo onto a farm site, the English subtitles take over:

Villain: "It was until our lawyer Kurt Schaefer voted to change the law. Now we own thousands of acres in Missouri and can buy more."

Villain (removing his shades and peering into the camera): "Yes. Yes, he is."

An announcer then urges the shocked viewers to tell Schaefer to tell the Chinese to stop buying Missouri farms. Lest you suppose Hawley insulted anyone's intelligence, or offended anyone's sense of decency, he did upset Schaefer by a rather decisive victory margin of just under 29 percentage points.

Certainly to Hawley's delight, the commercial provoked public outrage from the very sort of people Hawley wanted to have outraged by him in a Republican primary. A coalition of Asian-American businesses and organizations rightfully expressed their anger:

"The ad is clearly meant to elicit fear among Missouri voters and depicts Chinese and Asian Americans as 'the enemy.' The ad echoes the 'Yellow Peril' sentiment from darker times in our nation's history which led to abhorrent legislation like the Chinese Exclusion Act and Japanese American internment camps."

That's precisely what it was meant to do. And it did.

Hawley's spokesman at the time claimed he had nothing to do with the outside group's ad, an excuse believed by no one.

To be fair, Schaefer's campaign took a cheap shot at Hawley trying to link him falsely with Muslim terrorism, but Schaefer's in private law practice in central Missouri now. Hawley is a major insurrectionist, white-nationalist politician who, if successful, would pose an existential threat to American democracy going forward.

Flash forward to the present, and Hawley just garnered another precious round of national indignation. The sound-bite junkie staked himself out as the "1" in a rare 94-to-1, bipartisan Senate vote for a bill that would make it easier for law enforcement to investigate hate crimes against Asian Americans.

At a time when hatred is surging against the Asian American community here in St. Louis and throughout the nation, who would intentionally want to stand out against the slogan "Stop Asian Hate?"

Only Josh Hawley, of course. But why?

Simple: Hawley has wagered his political career on emerging as the Republicans' most strident standard-bearer for a different sort of racial messaging, which goes something like this:

Hawley has emerged as a full-throttle, Trump-worshipping white nationalist, pretty much without apology at this point. If his party is tethering its future to white grievance and victory in a culture war, Hawley has calculated that whoever is seen as the most fearless agitator and warrior will wind up on top.

Whether Hawley is a racist to the core or simply plays one on TV is a distinction without a difference. To understand this waste product of a broken political system, one must begin with an understanding that Hawley's only authentic quality is phoniness.

Most politicians lack candor at least some of the time. But Hawley is a living lie: the son of a banker masquerading as a farm boy. He capitalized on an exquisite education to hone the skill set of bilking low-information voters into believing he is their kindred spirit.

Hawley is hardly unique in that regard. Think of Trump, to some extent, although he is more of a pure grifter than an academic fraud. Hawley more closely resembles the master of the craft, Ivy-League-educated, country-yarn-spinner John Kennedy, the disingenuous senator from Louisiana.

What sets Hawley apart from the pack, however, is how lustfully he pursues his notoriety. The more Hawley can trigger outrage on the left, the more political capital he acquires on the right, especially a Trump base so fixated on white grievance.

So when Vanity Fair last week proclaimed that "Josh Hawley Proudly Declares Himself Pro-Hate Crimes," it did not trouble this callous demagogue; it validated him among those for whom the magazine is inaccessible. Still, the urbane Hawley understands every word on both sides of the cultural divide. And if he gets the opportunity to amplify the purported Vanity Fair insult, he'll gladly portray the role of victim.

Thus it is that Hawley stunningly proclaimed at the Conservative Political Action Conference in late February that "we're proud to be in a country that liberated slaves." Before attaining that lofty place, of course, America by definition had been "a country that enslaved slaves." But that hardly matters to Hawley. For his purposes, the more stupid the claim, the smarter, with respect to the race war.

Hawley's aim is to provoke incoming fire from the cultural elites. His formula is to pivot to the parlance of a Stanford/Yale graduate and fire back with lofty rhetoric that the base cannot comprehend. The latter point matters not: All the base voters want is someone fighting for them, and especially for their beleaguered whiteness.

Having checked off that box, Hawley can employ his well-honed oratory skills to clarify that his concerns about protecting Asian Americans from hate are that it surely will end all free speech for all time to come. Even if that point somehow eluded 94 fellow senators, almost half of whom are Republican.

Besides, Hawley would argue, his apparent hatred of Asians isn't anti-Asian at all. It's the new "pro-America" nationalism, which only implicitly conveys that the phrase "Asian American" must be an oxymoron.

For red-meat consumption, Hawley is anti-Asian. At his day job, Hawley is just drawing a line in the sand to China.

That mission might be more believable were it not for Hawley's stone-cold silence when Trump praised Chinese dictator Xi Jinping for naming himself president for life. When that happened March 4, 2018, Trump said he had "great respect" for Xi and added:

Hawley said nothing. Just like he said nothing on the dozens of occasions — including the first two months of the pandemic — when Trump lavished praise of Xi. Or for the entire four years Trump didn't lift a finger to help the people of Hong Kong, one of Hawley's presumed pet causes.

Whether Hawley is anti-Asian or pro-white-nationalism is, once again, one of those distinctions without a difference. The salient point is that Hawley continues to embrace — and attempt to build his future — by appealing to the worst instincts of the least noble citizens among us.