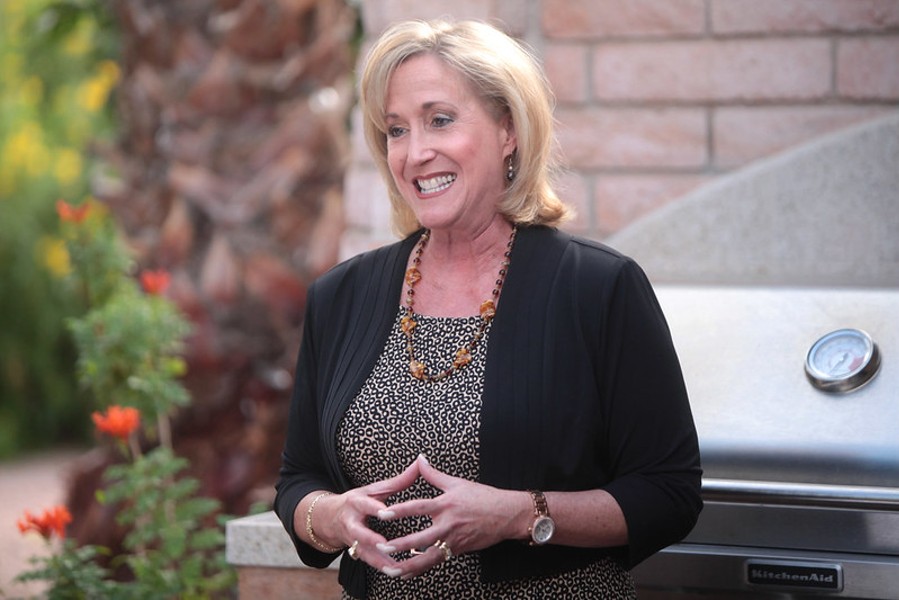 Fancy this. Congresswoman Ann Wagner has suddenly discovered the value of social media as a means of communicating with her constituents, and beyond.

Wagner, our St. Louis County Republican voice in Congress, remained strangely silent on Twitter for the past four-plus years, coinciding with the rise and fall of dictator wannabe Donald Trump. Not a discouraging word about him can be found on Wagner's Twitter feeds.

Observing a cardinal rule of Trumpism, Wagner maintained loyal silence during the world's four-year nightmare of the demagogue's viral venality. Either Wagner had no comment or has since deleted any tweets she might have posted in response to even Trump's most disgusting epithets. (Deletion arguably would be worse than silence, by the way.)

Wagner tweeted nothing in response to Trump's call for four congresswomen of color to return to their "home countries," nor his unending sexist slurs about women, nor his congratulations to Chinese President Xi Jinping for becoming president for life, nor his siding with Russia's Vladimir Putin over seventeen U.S. intelligence agencies on the world stage, nor Charlottesville, nor kids in cages, nor any of the rest.

This small number of examples were put forth here because they fall so directly into the sweet spot of Wagner's political essence. Wagner is nothing if not a self-proclaimed champion of victimized women and kids, a hard-liner on China and Russia, a pious crusader for morality in the name of religion. For her to have ignored these particular scandalous words and deeds — even from her own party's president — sets some new standard for hypocrisy.

Were there any doubt that Wagner would have behaved differently had she not been groveling at Trump's feet, she has wasted no time erasing it now that President Joe Biden is in office. On the very Twitter feeds previously limited to gooey photo ops and feel-good stories, Wagner has discovered the fountain of euphemisms.

Please note the plural reference to Twitter feeds. While there's some partisanship to Wagner's official account — @RepAnnWagner — the congresswoman reserves her personal account for the finer selection of red meats. That would be @AnnLWagner. Both accounts are verified.

Here is a sampling of Wagner tweets, just in the past few weeks, on Biden and issues of the day:

"I was proud to stand with another conservative woman who, like me, was endorsed by President Trump. Congratulations to Rep. Julia B. Letlow on her great victory tonight. Tonight we can stop Biden's socialist agenda, dangerous immigration policies and giveaways to China. Congrats, Julia!"

"Nancy Pelosi and the Democrats are not fooling the people of Missouri. We know exactly why they want to make DC a state - to pass their socialist agenda with all Dem votes."

"Thank you to @GroverNorquist and @SpeakerTimJones for hosting an important meeting in St. Charles County with grassroots leaders and opinion makers. We must stand together to protect our borders, our freedoms and our wallets from Joe Biden's radical liberal agenda."

"This is just the first of many tax hikes from Joe Biden. The Democrats will not stop raising your taxes until the government controls it all."

"The Communist Chinese regime is committing genocide. When will the Biden Administration start holding them accountable?"

"Joe Biden has been weak on Communist China since day one. It's an embarrassment."

"There is a crisis at our southern border and the only way we can stop it is by building the wall."

"The Squad is at it again - looking for anyway they can to incentivize illegal immigration. American taxpayers shouldn't give cash handouts to illegal immigrants. Period."

"11 years ago today, one of the worst pieces of legislation was signed - Obamacare. I support repealing Obamacare and will never stop fighting to stop socialized medicine.

"The radical Left wants to cancel books, TV shows, toys and even the language we use like mother and father. We can't let them."

There's a lot to unpack here. Wagner has always been a country-club Republican — albeit with intense opposition to women's reproductive freedom — so it's hardly a surprise she would push back on the repeal of Trump cuts for the wealthy. Some of the nonsense about "socialized medicine" has been around a while, just like the newer straw-men inventions about Dr. Seuss. That's to be expected from someone viewed as a conservative Republican.

But almost overnight, Wagner has discovered Twitter as a place to traffic in the red-meat rhetoric far beyond what she would have said in more civilized times.

Now she's all about hurling irrational insults about radical socialism to describe the views of even center-left Democrats. Is returning to a top tax rate of 39.6 percent Marxism or Leninism?

Even more egregious is the whole China thing. It's not clear which Biden policies toward China are so offensive to her, but we certainly know what wasn't offensive: Trump's bromance with Chinese leader Xi Jinping. Along with Trump's aforementioned admiration of Xi's becoming president for life, there were at least fifteen times early in the pandemic that Trump congratulated Xi for his handling of it. Trump didn't lift a finger on behalf of the Uyghur Muslims or Hong Kong democracy protesters. Wagner never uttered a word about any of it.

Just like so many Republicans who hated on Putin before they decided he was OK, Wagner parked her foreign-policy beliefs at the gates of Mar-a-Lago. But now Twitter has become the place to convene her own summit on the topic. And any pretense of civility is taboo.

Still, the most telling tweets are the ones we haven't seen from Wagner on the recent news regarding sex trafficking of women (at least not as of RFT press time). Sex trafficking has been Wagner's signature issue — almost a singular issue in her career in Congress. It's one of the few causes she has used social media to advance over the years, and she did so as recently as March 20.

"I'm fighting to stop sex trafficking for my kids and yours. No child or family should ever endure this modern-day slavery."

Funny thing, though. In the past few days, news across the great ideological divide has been dominated by allegations that Wagner's fellow Republican House member Rep. Matt Gaetz, of Florida, is under investigation by the Department of Justice for possible sex trafficking — among other rumored crimes — a probe started during the Trump administration.

Wagner has said not one word. It's truly unbelievable. One can only imagine her public rage were Gaetz a Democrat. And while Gaetz is certainly entitled to his presumption of innocence — and while many of us think any of his personal misbehavior pales next to the major role he played in the insurrection and attempted coup led by Trump — words cannot do justice to Wagner's blatant hypocrisy here.

So what do you think about a congressman being investigated for sex trafficking by the DOJ sitting on the House Judiciary Committee that oversees the DOJ? No harm, no foul? Sex trafficking not such a big deal anymore? Really?

If one didn't know better, one might think Wagner was thinking of running for Roy Blunt's vacant Senate seat. Oh wait. She is.