St. Louis-based P3 is teaching baseball's hottest prospects a difficult skill: how to stay in the game

STEVE TRUESDELL Ricky Maddock, a Kirkwood High student, works out at the P3 facility. Behind him is Zack Hunsicker, of Francis Howell High School. 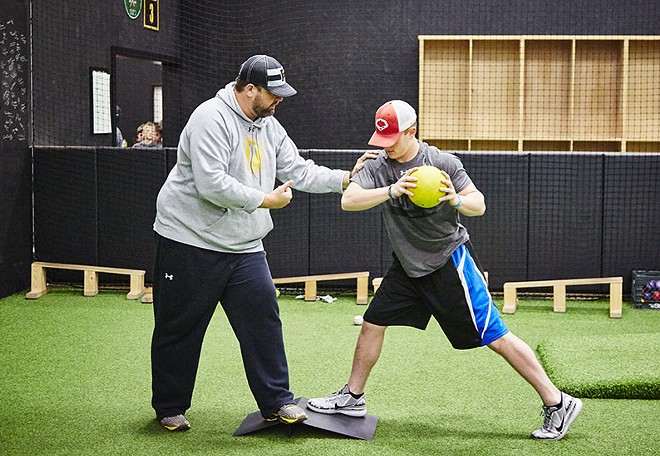 Delunas and P3 cofounder Josh Kesel share space with volleyball and basketball programs at the Bud Dome athletic complex in Green Park, a small municipality just off Interstate 55 east of 270. They offer a field with artificial turf, six pitching mounds and a weight room; there is nothing fancy about the facility. Professional and collegiate pitchers might be lifting weights while high school pitchers throw a few feet away — and vice versa.

A program tailored for high school pitchers runs from August through February and includes an initial assessment ($200) and then costs $400 a month. The costs for college athletes and professionals varies from player to player, says Delunas.

P3 is one of a number of programs specializing in pitching that have popped up in recent years. Ron Wolforth, owner of the Texas Baseball Ranch, gained national attention for helping former All Star Scott Kazmir resurrect his career. In 2011, Kazmir was pitching in independent baseball leagues and reportedly considering retirement because of injuries and decreased velocity. After working with Wolforth on his property north of Houston, he returned to become an All Star again in 2014.

"To be able to go somewhere and work on the mechanics and do certain things, certain drills, to really get kind of in tune with your body and just relearn the mechanics of pitching a baseball — that's what he provides out there, and it really helped," Kazmir told ESPN Magazine.

Kyle Boddy, the founder of Driveline Baseball, a company located near Seattle, has also attracted major league pitchers. He operates a similar program to P3 — Delunas says he and Boddy have traded ideas — and also sells a "Hacking the Kinetic Chain Starter Kit" for $497 that includes a 260-page training manual, instructional videos and an assortment of equipment including weighted baseballs and miniature medicine balls, which some trainers believe can help pitchers increase velocity. Driveline also sells a set of six such balls for $92.

The media has often credited the success of those programs to drills in which pitchers throw the alternative balls, but the practice is not universally accepted as effective or safe. Fleisig, the research director, told USA Today that initial research shows that such training could help pitchers with mechanics and velocity, but that "more work is needed to definitively show it."

"Varying by a few ounces seems to be good drills for training pitchers,'' Fleisig said. "But going really heavy, I'm concerned you're teaching bad mechanics. Going really light, I think you may put a dangerous force on your arm.''

Not all the teams are convinced, but they're definitely curious.

"An MLB team banned weighted balls and long toss and threatened to cut anyone who did it," Boddy recently posted on Twitter. "Meanwhile I have meetings with ten teams this trip."

Delunas had heard a similar rumor but declined to name the team. And anyway, he is not a zealot on any particular drill.

Their work, he acknowledges, is more about surveying the best of what's around than pure innovation. "Almost everything we [do] comes from somebody else," Delunas says. "I would say that maybe ten to fifteen percent of what we do at P3 is stuff that nobody else has done, that we have sat in a room and talked about and tried with guys."

The 1980s funk is bumping through speakers in the P3 weight room on a Monday night in February. "Come along and ride on a fantastic voyage," Lakeside sings over the speakers.

Rafael Lopez, a catcher who has had two brief stints in the majors, quips that the old-school R & B tune is a chance to "educate these young guys."

Lopez, 29, has spent much of the past six years at various levels of the minor leagues in the Angels, Cubs and Reds organizations. Now he's in the Toronto Blue Jays' organization.

"It's not personalized to you, and that's why I think so many guys get hurt," says Lopez.

The catcher is not training with P3, but is paying to use the facility. He says he has been impressed with the way the staff helps pitchers. Earlier in the day, he caught a bullpen session with David Schmidt, who signed with the Astros in 2015 as an undrafted free agent from Stanford University. The radar gun clocked him at 90 to 92 mph, Lopez says.

"He said, 'Man, this is weird. I don't feel like I'm necessarily putting that much effort into it,'" Lopez recalls. "I said, 'Your training is working; that's what it is.'"

Delunas was Schmidt's pitching coach at Christian Brothers College High School, and the pitcher continued to train with Delunas as he moved into the collegiate and professional ranks. Now he hopes to serve as a relief pitcher in some capacity within the Astros' organization.

At the start of this offseason, Kesel, 31, who focuses on strength and conditioning, used a goniometer and other tools to measure the range of motion and mobility in Schmidt's hips and shoulders. The P3 founders describe it as a "dry assessment."

Then Schmidt moved to the turf to throw while Delunas shoots some video. He slowed the footage down to between 240 and 1000 frames per second in order to dissect Schmidt's throwing motion and find out whether he is moving his legs and arms properly.

"The thought process behind it all is that if you clean up your movement patterns, it will help you throw the ball more efficiently. It will ultimately let you throw harder and put less stress on your body," says Schmidt.

Michael Kelly's body had been stuck in neutral for a few years when he decided to train at P3 last offseason. The San Diego Padres drafted Kelly, a high school pitcher from Boca Raton, Florida, in the first round in 2011. He spent the next five seasons at the lowest levels of the minor leagues. In the offseason, he would return to Florida and "find a catcher" to work with at his old high school.

Frustrated by the lack of progress, Wood, the agent, directed him to P3.

"For me, my frontside" — the term for the pitcher's leg that lands in front of his torso before he releases the ball — "would get kind of lazy," Kelly explains. "I didn't stick my frontside very well; I kind of just blew through it. That was something [Delunas] pointed out early, and we really tried to enforce [good] habits throughout the whole offseason." The P3 coaches used a drill involving resistance bands in which he simulated the throwing motion atop the mound without a ball to help him align with his target.

Last year Kelly finally started to progress, making it to Triple-A with the El Paso Chihuahuas, one step below the majors.

He was briefly in the big league camp during spring training and could start the year in the Chihuahuas' rotation, according to the San Diego Union-Tribune. His goal and expectation is to make it to the big leagues.

"All my teammates, all the guys I play with, they all know they have the ability to do it," he says. "It's just a matter of being consistent and refining what they are doing so they can perform on a daily basis."

P3 drew national attention in February when ESPN reported that Boston Red Sox outfielder Andrew Benintendi, considered by some to be the top prospect in baseball, had gotten stronger during the offseason while training in St. Louis. The story described P3 as "an elite baseball training facility" and included a video from Twitter that showed Benintendi doing curls with ropes attached to metal chains.

The outfielder added eighteen pounds of muscle. During spring training, Wood says, "You can easily see that the arm strength and the carry on the ball is a lot better."

This offseason, P3 worked with just as many professional position players as pitchers, training about 35 college players. Kesel says only that he does "not expect that number to decrease." Players on site have included Tampa Bay Rays pitcher Jake Odorizzi (10-6, 166 strikeouts last season), Miami Marlins pitcher David Phelps (2.28 ERA last season) and Jake Brentz, a pitcher who is climbing the Toronto Blue Jays organization.

Wood has sent more than 30 of his professional clients to the St. Louis facility. Not one has gotten hurt or regressed while working at P3.

"They are a very important part of my business," the agent says. "When I go and talk to players about what I do, how I can help them, arm care is at the top of the list, so these guys are extremely valuable to me. I trust them with every player I have."

Despite the record of keeping Wood's pitchers free from injury — which may involve some luck — the P3 founders acknowledge that other pitchers on their program have gotten hurt. There's no magic bullet for preventing the problems that lead to Tommy John surgery.

"I have done several presentations where I have told guys, 'If you're looking to avoid injury completely, pick up golf,'" Delunas says.

But pitching's allure can't be beat.

"It's almost like a sniper situation, where you are out there on your own but you are doing it to protect every other guy that is under your watch," he says. "You want to play shortstop, fantastic. You want to catch, fantastic. But for me, pitching is just different than anything else."

Delunas sometimes thinks about what could have been, if only he'd known back when he was still pitching more about the way the arm operates — and not just because he might then still have his original kidney.

"Certainly you always wonder what if," Delunas says. "And so I always have that in the back of my mind with every kid we work with."