If you want the lowdown on the dry rub at Hamilton's Urban Steakhouse & Bourbon Bar, the hotspot that opened on the edge of Lafayette Square in July, don't even think about asking for the recipe. Owner Paul Hamilton holds the particulars of the robust, rustic rub as close to his chest as a royal flush.

Instead, you'll have to close your eyes and attempt to deconstruct it — that is, if you can manage to engage in such cerebral activity while in proximity to the pure, unapologetic pleasure of Hamilton's whopping 22-ounce bone-in ribeye. The beautiful inch-thick cut of beef is the Platonic form of steak: the vision you have in your mind's eye when you muse upon such subjects as "death row meals" or what you'd eat in the event of an impending asteroid impact. Gilded with fat to the point it sparkles, the steak is coal black from the rub's coarse black pepper. Its back-of-the-throat heat is certainly present, but it's subtle, mitigated by a hint of sweetness and zest. The rub forms a coarse crust on every inch of the steak, its particular pleasure realized when you bite into a little pocket of beef and buttery-soft fat. Black pepper, sugar, smoked salt — you're best to just give up trying to figure it out and surrender.

Hamilton has been perfecting his dry rub for years — long before he decided, with his wife Wendy and business partner Jason Arnold, to add a steakhouse to their impressive restaurant repertoire. This past spring, the Hamiltons and Arnold realized they needed to do something different with the restaurant and brewery they own in conjunction with Charleville Brewing. That concept, a brewpub offshoot of Charleville's Ste. Genevieve vineyard and microbrewery, opened in May 2017 in an old engine repair shop on Chouteau. It was a soaring, open space, one that could accommodate a brewery, tasting room, bar and restaurant with room to spare.

And that was the problem. Although Charleville Brewing Co. was a success, the space proved too large, making the room feel sparsely populated even on its busiest nights. The Hamiltons and Arnold began to realize they were underutilizing their real estate. They decided to subdivide the room into two separate concepts.

When they looked around to see what their neighborhood needed, they decided upon a classic neighborhood steakhouse. At first, they thought executing on such a vision would be easy — after all, they already own perennial favorites 1111 Mississippi, PW Pizza and Vin de Set. However, once they began to dig in to the nuances of beef, its cuts, grades, breeds and so forth, they knew they needed to do their homework.

That research took them to the famous Buckhead Beef purveyors in Chicago, where the Hamiltons and Arnold tasted just about every cut of beef from every cow in the company's portfolio. They settled on Iowa Premium Black Angus, a heritage breed that can be traced to small family farms in northern Missouri and Iowa, decided upon a 21 age for their dry-aged offerings, and got to work translating their vision for a neighborhood steakhouse into a reality.

A large part of that vision is differentiating their eatery from the swanky corporate steakhouse chains that seem to pop up in Clayton faster than mushrooms after a cool, wet day. Hamilton's is indeed a steakhouse of that caliber, but it has a cozy, neighborhood feel to it — the sort of place you'd go with business partners to celebrate closing a deal rather than the pretentious place you'd take a new client to seal it. This has a lot to do with the size of the space. If Charleville Brewing Co. was too big, Hamilton's is intimate if not downright tight on a busy Friday or Saturday night.

A small bar, stocked with a healthy supply of bourbon, occupies the front room; the main dining room sits right behind that. Warm-hued exposed brick gives the restaurant a rustic feel, as do the craggy grapevines from the Hamiltons' farm hanging from the ceiling. Exposed lightbulbs cast their golden light over the room, giving off the sort of soft glow you get from a fireplace. 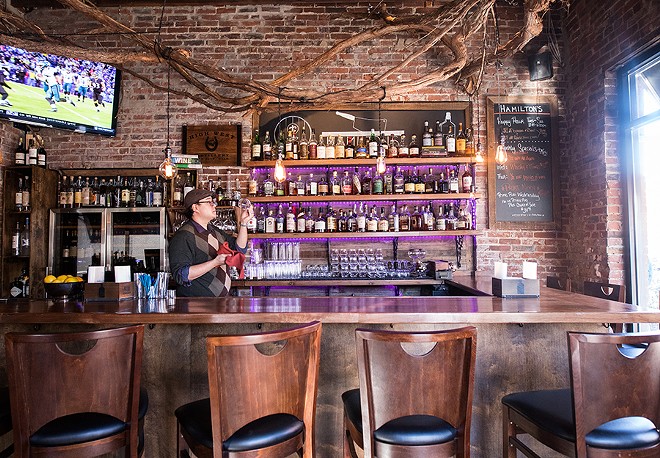 Crabcakes, adequate but not dazzling, contain a generous amount of crabmeat and limited breading. The shredded lump meat seemed pasty and too fine to this admitted crabcake snob, but at $15.99 for two discs the size of mandarin oranges (when jumbo lump meat retails for $45 a pound), I understand the decision.

Cauliflower fritters are an enjoyable reprieve from the meat-heavy menu. The golfball-sized rounds have the rich fried taste of good hush puppies, along with a creamy center. The accompanying chimichurri crème fraiche is a refreshing dipping sauce, if a little thin.

A sea-scallops appetizer places four plump, well-cooked shellfish atop an overly salty pea puree; the vegetal taste overtook the seafood's delicate flavor. I was also unimpressed with the duck appetizer. It offers just four small slivers of smoked meat, and they leaned toward overcooked. Figs add a touch of sweetness that pairs well with the smoke, but an accompanying carrot puree contributes little flavor. 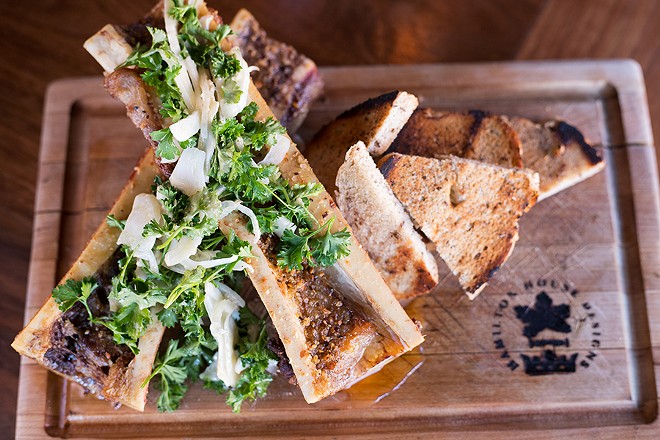 If the lobster bisque — thin and overwhelmed by what tasted like thyme — also misses the mark, the Caesar salad is perfection of the form. Crisp romaine, Parmesan shavings and a vibrant, lemony dressing that makes your mouth pucker stand in perfect balance. I especially liked the rye notes from the croutons, a subtle but significant feature. This is one of the best versions of the classic salad in town.

Though first and foremost a steakhouse, Hamilton's excels at its non-beef offerings. Luscious salmon benefits from its own dry rub, this one warm with baking spice. Pickled red onions cut through the rich fish with a zesty slap of vinegar. Flash-fried Brussels sprouts complete the dish. Or should I say the dish completes the sprouts? They could be the star of the show. Crunchy, encrusted with salt and browned but not black around the edges, they are one of Hamilton's highlights.

Even the chicken, so often a throwaway dish at any restaurant, let alone a steakhouse, is thoughtful. Two airline breasts, served atop roasted root vegetables, are shockingly tender and juicy, their succulent meat glazed with velvety Madeira-spiked cream sauce. They are surpassed in non-beef glory only by the outrageously tender pork osso bucco; seriously, you could butter your bread with this marsala-kissed meat. Were Hamilton's simply a classic American bistro and not a steakhouse, these dishes would be enough to warrant a visit.

But Hamilton's is indeed a steakhouse, and it excels under that rubric. The dry-aged ribeye may be the show-stopper, but the Kansas City strip is no shrinking violet. Though less marbled than the ribeye, the strip has an intense beefy flavor and pleasant, grainy texture. 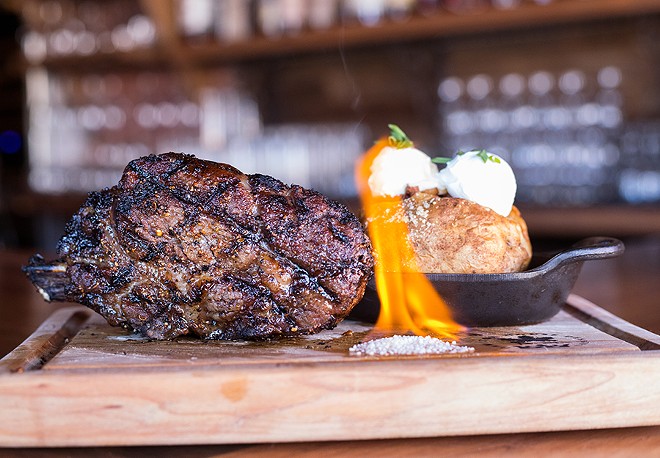 While both the ribeye and the strip hold up to the rub, executive chef Brett Buettner smartly applies less of it to the much leaner filet so as not to overwhelm the flavor. Because of its limited fat content, this is the cut best-suited for Hamilton's sauces, rubs and butters, including a béarnaise so beautifully whipped it's almost fluffy and a rich gorgonzola butter that infuses every bite with earthy funk.

Next to the ribeye, however, my favorite entrée is the rack of lamb. The chops are so thick, and so flawlessly cooked, I'd swear I've never seen a better presentation of the dish. Each chop has a thick layer of fat on one side that imparts a nutty, almost buttery funk in every bite, even as mint pistou, a verdant tapenade similar to a pesto, provides the best update to mint jelly I've seen. The garlicky freshness expertly balances the lamb's flesh and fat.

Unlike the corporate steakhouse chains, Hamilton's includes your choice of side dish with each steak — which means those sautéed Brussels sprouts paired with the salmon can be ordered to compliment any dish. I prefer them to the roasted mushrooms, which tasted like the tannic insides of a bourbon barrel. They seemed overcooked to the point of being acrid. 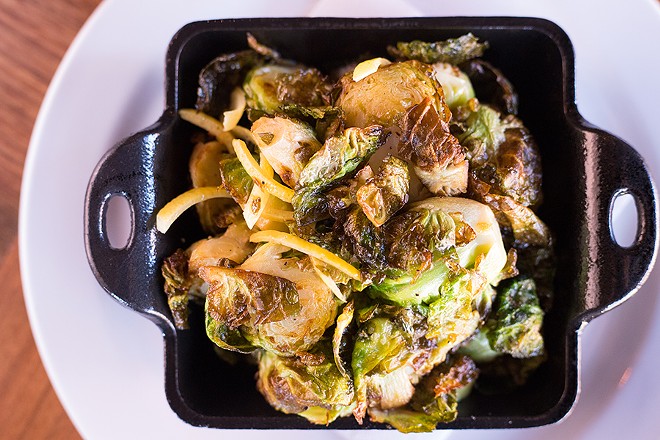 Mac and cheese was much better, the creamy, sharp-cheddar concoction punctuated (for an extra six bucks) with chunks of sweet lobster meat. If you're carbing out, though, go for the roasted-garlic mashed potatoes, so decadent it's possible they are equal parts butter and spud, flecked with large slivers of garlic. When the juice and rendered fat of that ribeye mingle with these garlic-laden beauties, you hear the angels sing.

How anything could follow such an experience is unfathomable, but the desserts make a worthy effort. Cheesecake, swirled with pumpkin and encased in a thick, brown sugary crust, is positively cloud-like. Alternately, the carrot cake is wonderfully rustic, more of a composite of carrots, raisins, pecans, coconut and baking spice than a spongy cake. A luxe cream cheese frosting is the silken tie that binds.

That dessert brought me back to my own stint as a server at one of the big-name, high-end steakhouse chains where we were encouraged to tell our guests that we would happily microwave their carrot cake for sixteen seconds to give it a fresh-from-the-oven effect. That same chain — a restaurant where the average guest spent about $100 on food alone — seasoned its mashed potatoes from a packet. You'd be surprised what's lurking behind the curtain at such places. Once you've taken a peek, the prices seem appalling.

That's why, in a city that does not lack for steakhouses, Hamilton's is such a breath of fresh air. It's not cheap; the margins on quality steak are painfully slim, and so you will drop some good money here. However, the fact that Hamilton's offers a local alternative to the modern steakhouse in a from-scratch kitchen should make you feel better about throwing down that coin. Besides, the rub on that ribeye tastes like a million bucks.