Patti Cake$'s Danielle Macdonald Is a Star, But the Movie Falls Flat

​C​OURTESY OF JEONG PARK. © 2017 T​WENTIETH CENTURY FOX FILM CORPORATION Danielle Macdonald​ has a dream .... and a hip-hop song on her heart.

There are few surprises to be found in Patti Cake$, a predictable, eager-to-please movie with a soft heart wrapped in a tough veneer. It's a familiar fairy tale, the story of a young artist struggling to outwit those who scoff at her dreams and rise above her humble origins. Setting such a story in the world of contemporary music can be tricky — its success, perhaps, heavily determined by the musical genre in question. Sometimes you get Purple Rain or The Harder They Come; more often you get Cool as Ice.

Patricia Dombrowski is played by Australian actress Danielle Macdonald, whose breakout performance is the best thing about the film. She's an overweight young woman stuck in a dreary corner of New Jersey, a dingy world where ambition is ridiculed and the town's major cultural attraction is karaoke night at the dive bar where she works. It's a post-suburban ghost town used by writer-director Geremy Jasper to create a kind of underclass exploitation film, a place where every sink overflows with dishes and some unspoken law evidently prohibits anyone from emptying an ashtray.

Patti shares an overcrowded house with her hard-drinking mother (Bridget Everett) and her ailing grandmother Nana (Cathy Moriarty channeling the voice of one of Bart Simpson's aunts). In her dreams, though, she's Killa P, living in luxury and following the lead of the hometown hero, a rapper named O-Z.

Patti wants nothing more than to escape from her blighted environment, even if O-Z still lives there, curiously, despite representing the success she craves. But she has no outlet for her rhyming skills until she and her friend Jheri (Siddharth Dhananjay) meet a reclusive musician who performs under the name Basterd the Antichrist. Basterd, who sports multiple piercings and a fright-show contact lense in one eye, lives in a shack next to the cemetery. The home's decor is late Hot Topic horror, but it happens to have recording equipment. He reluctantly joins Patti and Jheri (and Nana, who has tagged along) in forming PBNJ. You know the rest: Will Killa P and her friends overcome obstacles to get radio play and make it to the big talent show?

Making his feature debut, Jasper, whose previous filmography includes music videos for Selena Gomez and Florence + the Machine, has crafted his film for those with short attention spans. Any idea that takes more than two shots or four seconds is avoided. Even as unsurprising as the various narrative resolutions are, the director plays it safe by packing nearly every emotional payoff into a single sequence. It's like a caricature of what people call a feel-good movie — perhaps if your idea of feeling good is binging on comfort food. 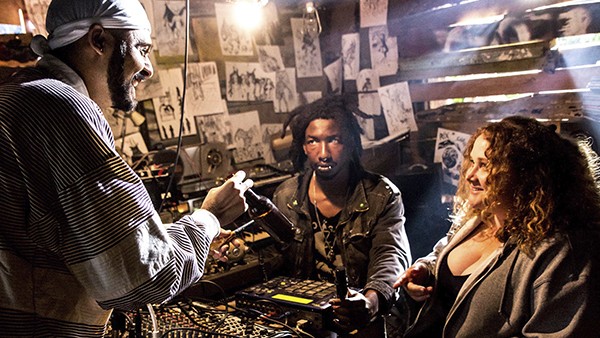 But what are we supposed to feel good about? Patti Cake$ is a fantasy in which wishes are fulfilled without much effort or explanation. (Although Patti is frequently shown writing lyrics in a notebook, when she actually starts recording, Jasper falls back on the movie cliche in which any creative work is seen as simply a combination of improvisation and happy accidents.) The film presents its heroine as simultaneously street-wise and thin-skinned, destroying a rival rapper with a string of raunchy insults, but still getting her feelings hurt when the same rapper calls her "Dumbo."