What would you pay for a Budweiser to quell the searing chile heat of Grace Chicken + Fish's spicy wings? What if we told you those fiery wings sting your lips as if you've used a ghost pepper as lip balm? $5? $20? A peek at your naughty bits?

These offers were all on the table a few Saturday nights ago, yelled out of the window of a parked minivan by 20-, 30- and 40-something-year-old women. Behinds half-stuffed into car seats, they were gobbling down an immense order of takeout from the four-month-old Grove food counter. Outside, the temperature was frigid, but inside the van, the extreme heat of Rick Lewis' cayenne-forward coating made his wings as hot as the surface of the sun. Even the juicy meat — plump, succulent and ribboned with just a touch of fat — did little to slow the burn. A dunk in the ramekin of zesty buttermilk-lime dipping sauce helped; soaking a slice of the accompanying white bread in the sauce and slathering it onto the lips like a healing balm helped more. Still it was not enough, so when one of the passengers returned with four, ice-cold Budweisers and a coy smile, no one dared ask any questions.

Scenes like this are a regular occurrence at Grace Chicken + Fish, Rick and Elisa Lewis' lively, quick-service food counter that's adjacent to their flagship comfort food restaurant, Grace Meat + Three. Since opening in the fall, the walk-up window has already garnered a reputation as a destination in the Grove to soak up a night of bar-hopping, imbibing and general tomfoolery. But it's not just the drunks: Industry workers, hungry after a long night of work, residents of the neighborhood looking for a midnight snack and loyal Grace fans have all converged on this tiny food window.

The Lewises knew there was this level of demand for casual, late-night offerings in the Grove because they'd witnessed it firsthand. One night, after they'd closed Grace Meat + Three for the evening, they were hanging out near the back side of the restaurant and wondering what to do with a patch of underused space. Their plan was to set it up as a merchandise booth, but when they saw the throngs of people walking by — some even peeking inside their closed restaurant to see if they could grab a bite to eat — they decided to shift gears and turn it into a food counter instead.

Though Grace Meat + Three had been immensely successful, the husband-and-wife team wanted to do something different than just a takeout version of their restaurant. For a while, they'd been talking about ways to grow the Grace brand, whether through a food truck or other locations. This new venture, they realized, gave them the opportunity to try out an idea that, while philosophically coherent with the flagship, would have its own identity and be easier to replicate.

Working with the acclaimed architecture and design firm SPACE, the Lewises created an eye-catching, outdoor walk-up window, inlayed into a royal blue wall. A gigantic, yellow-painted silhouette of a chicken adorns roughly a third of the building's side, with the script "Bwok Bwok Chicken Chicken" (h/t Project Pat) emblazoned near its breast.

Outside of a few unpainted, wooden picnic tables, there is nowhere to sit and linger. The idea is to grab food and go about your business, or, when the elements require, hang out in your parked car and heckle strangers for booze before heading to your next destination (passengers only, of course). Mind you, this desperation comes from the fact that Grace Chicken + Fish is intentionally alcohol-free. The Lewises served beer for a little while, but after a few incidents too gross to detail when talking about food, they decided that they did not want to add to the late-night debauchery.

Instead, they designed the place to be a quick-service destination for mostly hand-held eats served in easy-to-manage packaging. That is where the comparison to traditional fast food ends: The Lewises have not sacrificed a modicum of quality at the late-night window. Some might say the counter's excellent food is even wasted on the drunks that pack in for dishes like chicken tenders that should be seen as the gold standard of the form. The meat is lightly coated in a perfectly seasoned breading and served searing hot out of the fryer so that plumes of savory, chicken-scented steam waft out, enveloping you in its intoxicating aroma. 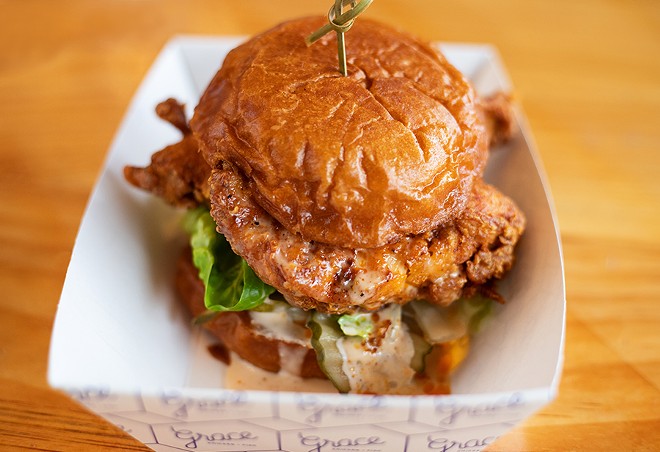 The chicken tenders are surprisingly juicy for white meat and are flavorful enough without any adornments. However, chef Lewis put his heart and soul into creating eight different dipping sauces to enhance the experience. The General Wang has the sticky sweet, garlic and five-spice undertones of General Tso's Chicken with a thin texture that's not at all cloying. It's a standout sauce, as is the Sweet Whiskey BBQ, which is tangy and flecked with black pepper.

Catfish, lightly dusted with seasoned cornmeal, is flawlessly cooked and so fresh and light you'd forget that the fish can have a reputation as coming across as muddy. You can eat it on its own, akin to chicken fingers, or you can select it as your filling for The Sandwich. Tucked into a pillow-soft, toasted brioche bun, the catfish is dressed with lettuce, onion and pickles for brightness and crunch, then topped with a dollop of a sauce of your choosing. Here, the Comeback sauce — a Southern condiment that is the love child of ketchup and remoulade — is the only selection you'd want. Creamy, subtly smoky and kissed with chile sauce, this excellent accoutrement is the ideal way to dress the fish.

You hope that, no matter how inebriated its patrons may be, the beauty of Grace's buttermilk-fried shrimp is not lost on alcohol-compromised taste buds. The large shellfish are deveined and split, their shells partially pulled back to reveal a peek of plump meat. The shell and the rest of the shrimp's body remains, however, which gives the delicate buttermilk batter extra surface area to cling to. This means you get the crunch without having so much breading that you lose the flavor of the shrimp. It's magical — and made even more so when dunked into the optional side of garlic-Buffalo sauce that delivers a powerful punch of spicy tang without overtaking the shrimp. 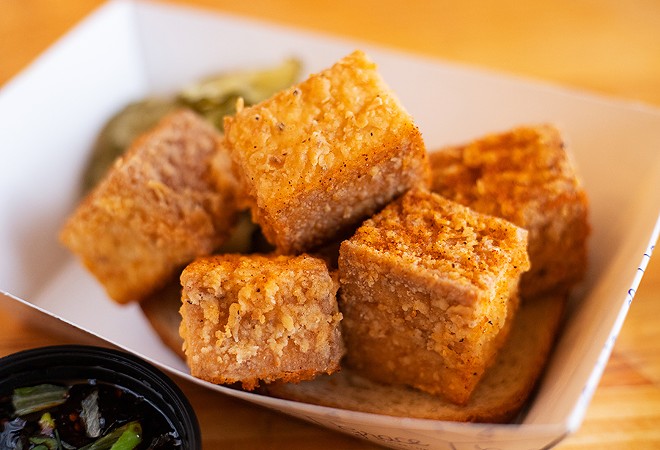 As excellent as the shrimp is, Grace's tofu is, unexpectedly, its best dish. Creamy and coated in a thick layer of black-peppery breading, the tofu delivers the pure joy of eating the most perfect fried chicken breading by itself. These little squares of seasoned crispiness are shockingly good — crunchy on the outside, jiggly as custard on the inside — and are the counter's don't-miss dish.

Grace Chicken + Fish offers a few different sides, like an excellent version of mac 'n' cheese that's both rich and tangy. Toasted bread crumbs add texture to this steaming bowl of decadence. Loaded fries are another fun offering, topped with pickled jalapeños, bacon crumbles and a generous dusting of savory seasoning. The accompanying beer-cheese sauce, while outstanding and beer-cheese-soup-like in flavor, was on the thin side. Only after it cooled did it properly cling to the fries. It was torture to wait. 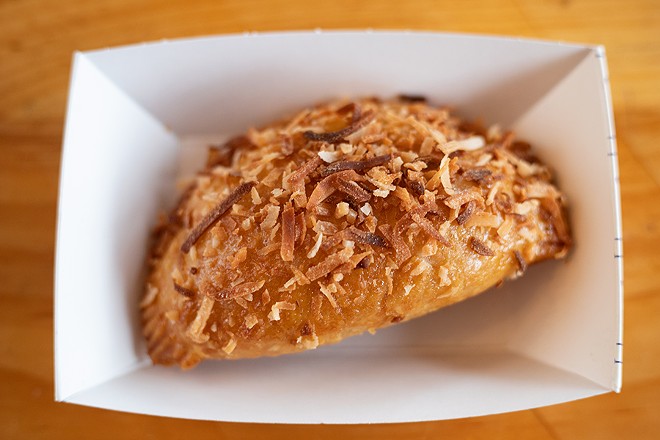 Of course, you could just skip everything and show up for one of the restaurant's hand pies. The selection changes regularly, which is a shame because it means the coconut cream pie version will not be in our lives as often as it should be. Flaky, covered in toasted coconut shreds and oozing with luscious, sweet creamy filling, this stunning pastry warms the soul as much as the belly.

Between the creamy sweetness of the pie and the time elapsed between those first few bites of spicy chicken, the sting on your lips has probably subsided enough for you to keep your money and your dignity — after all, $20 is way too much to pay for a bottle of Bud. Grace Chicken + Fish, on the other hand? There's no price too high.