Gods of Egypt Is a Failure of Biblical Proportions

You could say a lot of things about Gods of Egypt. That its casting choices are racist (or at least insensitive). That its concept of "slightly larger-than-normal sized humans fight in anthropomorphic animal mech suits" sounds like something a video game studio forgot to finish (it does). That its homage to fantasy tropes is at once fantastic and hollow (yep). Mostly, though, I'm just astonished by how such a zany premise manages to be so utterly blasé.

This movie has Geoffrey Rush (Ra) ringed in fire while flying through the sky in a spaceship and jousting with a giant evil worm. The earth is flat. The gods are scaled to be about one-third larger than normal humans. Bek (Brenton Thwaites) is trying to blackmail Horus (Nicholaj Coster-Waldau) into resurrecting his girlfriend, Zaya (Courtney Eaton). Hathor (Elodie Yung), the goddess of love and the Mistress of the Underworld, is being hunted by demons. Thoth (Chadwick Boseman) — the god who, in real Egyptian mythology, picks up a wad of semen, puts it on his head, and says, "Cool! This is the moon now" — even shows up. They knock over buildings, jump off waterfalls, overcome booby traps, trick a sphinx.

This sounds awesome. Somehow, it's boring. 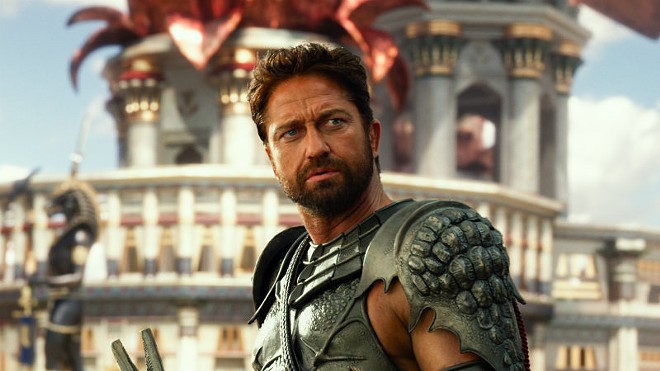 Gods of Egypt is a mishmash of ideas, a silly but fun ode to the fantasy genre. It could have been great. I wanted it so badly to be great. Instead, the quest by Set (Gerard Butler) to steal magic body parts from the other gods' mech suits in order to create a supergod, only to have his cobbled-together monstrosity fail to harness the power necessary to achieve his lusted-after immortality, is a visual metaphor for the entire film.

The central plot — smart-ass thief saves land from unfair ruler by aiding surly outcast and helping him get back his lady, both of whom are under a strange curse — reminds me of Ladyhawke, if Ladyhawke were self-conscious and arbitrarily structured around romantic subplots pretending to be real plot. The wise-cracking kid and the booby-trapped temples could have escaped an early draft of Indiana Jones and the Temple of Doom.

The acting is full of inexplicable decisions that probably had little to do with the actors; Butler may have been cast entirely to reprise his performance in 300, complete with strutting and bicep-flexing and spittle-flecked speeches. And whoever did the CGI landscape design has been playing a lot of World of Warcaft and Mass Effect. (To their credit, the landscape designers and cinematographers did some of the best work in the film; the landscapes were often riveting, and some shots were downright gorgeous.) Few of these comparisons are inherently bad, but the writing just took too many missteps. Too much feels stoic and self-important. The end result feels like an insincere version of Jupiter Ascending.

There are good moments. Three jokes landed. At one point, giant fire-breathing snakes ridden by child assassins chase down the protagonists. Throughout the entire final confrontation, the worm gnaws on the world in the background. You watch slightly-larger-than-life Horus scale the inside of a relic by using hieroglyphs as handholds, and this big black cloud of evil teeth just takes a bite out of Egypt. It's great.

Mostly, though, the film seemed to try very hard, very poorly. For its $140 million budget, parts of the film seem cheap. An entire fight sequence feels like director Alex Proyas may have forgotten about one camera in post-production. At another point, the thief is thrown in the hold of the spaceship/throne thing, but it looks like someone just straight-up forgot to make a set for the below deck. I suspect they dropped him in a prop room and prayed no one would notice.

Maybe with more sincere fun, this movie could've been a great late night rerun, one of those politically-incorrect nods to a former age's most entertaining genre fluff. As it is, though, Gods of Egypt feels like the Hollywood machine stuffed a meat grinder with some things it thought would sell — a couple of love stories, some fancy white dudes, a bunch of very large humans shape-shifting into animals, a pseudo-monotheistic moralization of a polytheistic pantheon — and cranked until something crawled out.