Go Play (and Listen) Outside With St. Louis Concerts

NATE BURRELL You can hear Beth Bombara and a ton of other St. Louis performers outside this year.

After more than a year of our new, pandemic-centered normal, Drew Jameson has things pretty well figured out.

As owner and talent buyer for the promotion company Jamo Presents, Jameson was forced to adapt his whole way of doing business when COVID-19 came to the St. Louis area. At the time, he was booking for the outdoor pavilion stage of the now-defunct Atomic Cowboy. When the pandemic started, Jameson went from working a steady gig at a dedicated venue to the uncertainty that comes when the government announces that gathering in a crowd of people could spell sickness or death for all parties involved.

Jameson knew that he and his team would have to be deliberate in their planning if they were to host events safely. For months, they huddled and devised a way for live music to resume in the city of St. Louis, ultimately launching a concert series at a pop-up outdoor venue situated at the intersection of Cerre and Seventh streets, dubbed the Lot.

"It's a ton of unknown risks to even be operating a business at that point in time, right? No one knew what to expect," Jameson says. "But for us, I had a really good team that did some diligence, and we felt really confident. We had spent a long time — I can't even remember the timelines anymore, but I think from March until we announced in August we were planning the entire time."

Their efforts paid off, and the Jamo Presents team was able to put on 28 shows at the Lot over the course of seven weeks, with about 5,000 tickets sold in total. A slew of local and regional acts graced the stage during that time, with performances by Tonina, Mvstermind, Dave Grelle, the Burney Sisters, the Funky Butt Brass Band and many more. Jamo Presents even has the distinction of being the very first to bring a touring act back to town since everything was shut down, in the form of Andy Frasco & The U.N.' show in October, 2020.

With that series a success, and with a new partnership with City Foundry that saw the promotion company booking socially distanced shows in its indoor space during the colder months, Jameson is once again looking forward to bringing the action to the outdoors. Starting in April and running through the month of June, City Foundry plays host to a slate of concerts, booked by Jamo Presents, on an outdoor stage. The series will see performances from NandoSTL, Neal Francis, the Floozies, Old Salt Union and a return trip by Andy Frasco, among others.

Jameson says that, compared to the dizzying confusion at the beginning of last year, he and his team feel like they have a good handle on how to run things for this series. He's excited to move outdoors again, where enforcing mask compliance is less of a pain.

"We can't wait to be back outside," he says. "We've done that exact floor plan before outdoors somewhere else. And plus you don't have to be nearly as hard about masking when you're inside your pods when it's outside."

In addition to the Foundry series, Jameson has teamed up with the Kranzberg Arts Foundation to book some shows at the Big Top tent venue in Grand Center. Late March saw a performance by Martin Sexton, and Ghost-Note made an appearance in April, as did Reverend Peyton's Big Damn Band; future shows on the books include a performance by Galactic on May 16.

And those Big Top events are just part of the picture for the Kranzberg Arts Foundation. Executive Director Chris Hansen says the group will continue on with its popular Open Air series outside of the Dark Room in Grand Center, with 40 weeks' worth of programming already on the books for 2021. Highlights include concerts by Beth Bombara, Western States, Coco Soul, Short Round Stringband and many more. 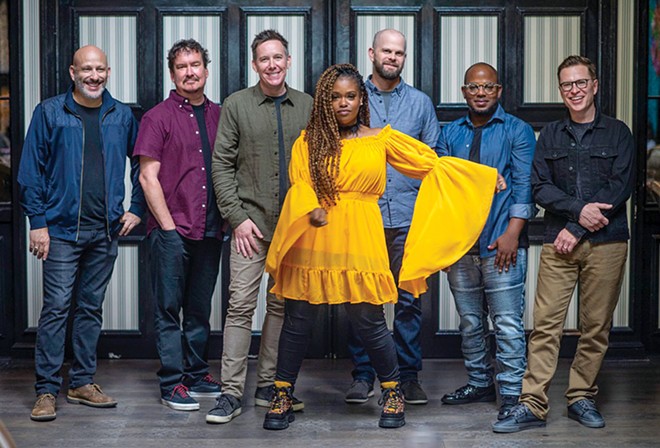 "Open Air is the longest-running concert series since the pandemic — we've put over 100 bands on stages since last July," Hansen says. "We've invited audiences safely to re-engage the arts, and we've been able to do that in a contactless way where there's absolutely no potential for exposure, artists are getting paid very well and audiences are having world-class art experiences. It's been really successful, and we're going to continue it at least until the end of September."

According to Hansen, the Open Air series has seen no instances of community spread in all the months it's been operating. That means no staff illness, no guest illness, no calls from the health department. Hansen credits his team's diligence regarding safety measures, as well as some useful technological solutions, for the COVID-safe nature of the series.

"The reality is, in the environment that we've created, no one is within six feet of each other. And our staff, the total table time that someone would be at your table dropping off food and drinks is within a minute, the entire time you're there," he explains. "I mean, you're literally ordering everything in advance; you're just dropping it and going. So we just created an environment where no one can really be near each other in that way for long enough for there to be a problem. And we've maintained a fully ventilated space — even in the winter when we put partial walls back on the tent, we left six-foot openings in at least four locations around the tent, and we pushed in fresh air heat from a maxi heater that's pulling in fresh air, warming it up through diesel fuel and pushing it into the environment. So the entire environment is ventilated the whole time."

While both Hansen and Jameson are happy with the setups they've conceived for their respective outdoor concert spaces, each is eagerly looking forward to being able to book indoors once it is safe to do so. Hansen hopes they'll be able to start moving things back into the Dark Room for similar dinner-and-a-show packages as those offered by the Open Air series come fall. Jameson is hopeful that he'll be able to safely book shows with fewer restrictions by the time the weather gets cold again as well. But both recognize that the realities of the situation may require more patience.

Meanwhile, though, the outdoor shows each has been able to help provide have been a welcome respite from the drudgery of pandemic life.

"It's not an easy moment. But we're sticking to it and fighting the fight," Jameson says. "Until the city allows us to ease up, we're here."