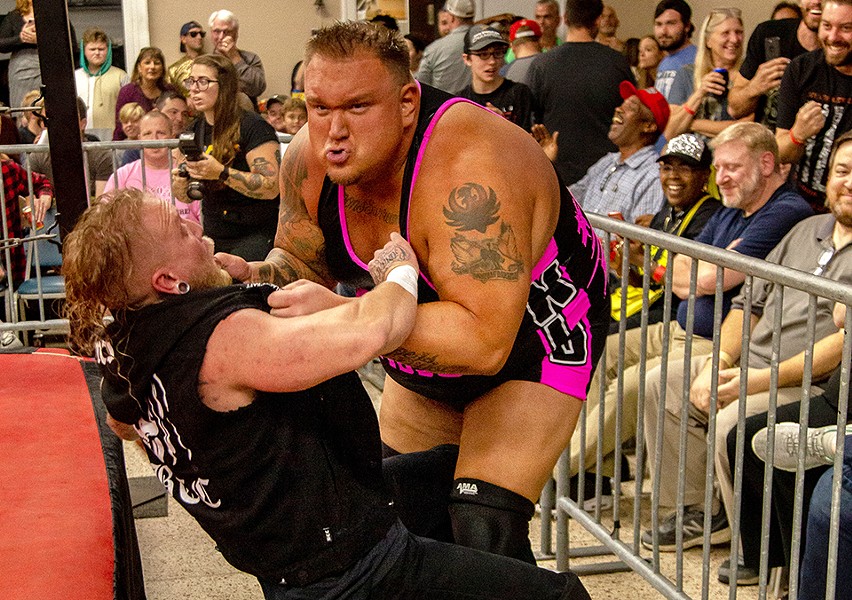 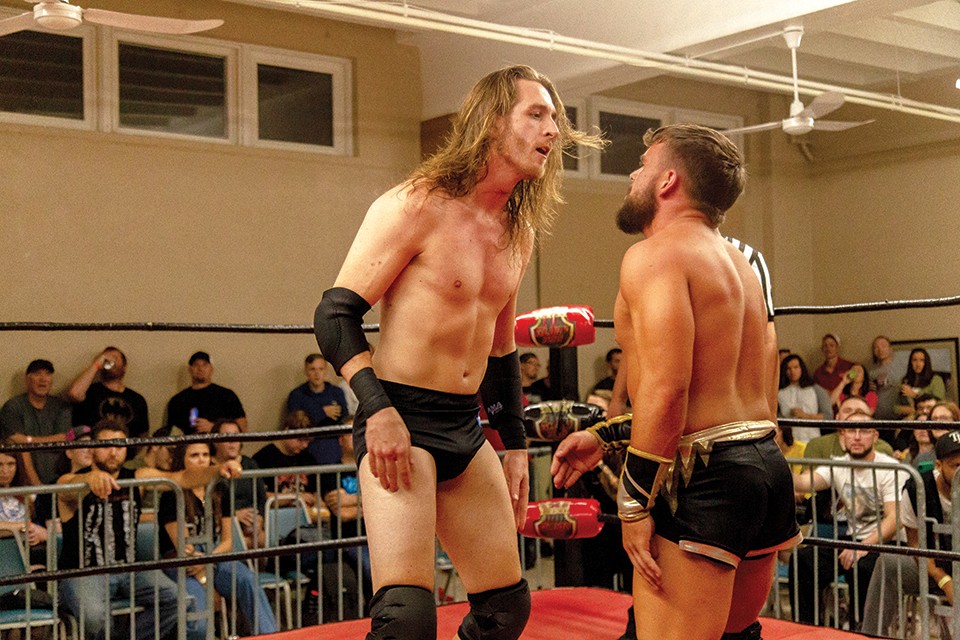 There's an element of professional wrestling that's not unlike method acting. To varying degrees of intensity, all wrestlers are putting on a performance, even if it's a performance that's in some way an extension of their own personality. "I wouldn't say I delve so much into a character as I turn me up to 100," Davidson says. "Wrestling should be an extension of yourself."

There are three basic personas most wrestlers fall into: a face or babyface, who is a hero or good guy (think Hulk Hogan before the real-life bad guy shit); a heel, who is a villain or bad guy (Macho Man Randy Savage as the villain to Hogan's babyface); and a tweener or antihero, whose persona falls in between the two (think Eddie Guerrero). In the ring, Davidson is somewhere between a babyface and a tweener: He's intense and in your face, sticking out his tongue and mugging for the crowd, but he's often wrestling more straightforward heels, and — at least in St. Louis — he is never booed.

There is nothing ambiguous about Glory Pro fan favorite "Lonestar" Curt Stallion, however — or the boos that fans enthusiastically hurdle his way. For much of his time with the promotion, Stallion was a textbook antihero, and an incredible one at that: In and out of the ring, he speaks with a slight Texan drawl, but his opponents aren't greeted with Southern hospitality.

At a recent show for a competing local promotion, Saint Louis Anarchy in Alton, Stallion roiled the crowd with an indictment of other popular St. Louis wrestlers. Prior to the match, a fan had shared a photo of four wrestlers on Twitter, calling them the pillars of St. Louis professional wrestling. Stallion received a hero's welcome that day due to a recent Evolve Wrestling special he appeared on that was shown on the WWE Network, so he needed to turn the crowd against him again.

"I've been made aware that there are four pillars of St. Louis professional wrestling," Stallion said at the match. "Let's give them a round of applause, come on. I won't name names, because you really should know who they are, but let me tell you something: I got here in January 2015, and I can't say that there was much of a foundation for those pillars to be standing on until that concrete from Texas came and got laid down. I showed up here, started busting my ass and all these motherfuckers came up right with me because they had no other choice. They wanted to keep up. I came here with a purpose, and that purpose is I want one of those four fucking pillars, and I don't care who it is; I'm going to show you guys exactly how you were able to stand in the fucking first place." (Anarchy, unlike Glory Pro, is not billed as a family-friendly promotion.)

What's smart about this promo is not Stallion's ability to make a crowd hate him (in pro wrestling, you either want to be fiercely loved or fiercely hated). It's how he took a seemingly benign fan tweet and turned it into an opportunity to feud with and fight a local wrestler; he essentially created a rivalry and match out of thin air. Although a talented technical wrestler, Stallion understands that success in his industry is often more about savvy storytelling and character work than perfectly executed piledrivers.

"They told me to go out there and make people mad, and by 'they' I thought they meant the wrestlers, so I started rambling," Stallion says. "Nine times out of ten, when you see me grab a microphone or talk on camera, it is pretty much real. I'm one of the guys who doesn't hold back because I don't care if anyone gets offended by what I say. But this promo was from the heart; these guys were nothing until I gave them a reason to start pushing themselves and stake their claim, and they had to hustle a little harder."

As a kid growing up in west Texas, Stallion idolized WWE superstars like Eddie Guerrero, Shawn Michaels, Stone Cold Steve Austin, Chris Benoit and St. Charles native "The Viper" Randy Orton (the son of WWE hall of famer "Cowboy" Bob Orton). These wrestlers are clear influences on both Stallion's in-ring persona and wrestling style today. "The guys who don't need to call things, but they still have that presence, that aura, to them," Stallion says.

When he describes not needing to call things, he's saying that these are wrestlers who don't slavishly plan out every move in a match other than the finish. "A lot of guys nowadays want to put whole matches together and call a million things [ahead of time], and I can do that too, but I'd rather ... if you don't have a bunch of stuff to remember, you can go out there and have this presence, this energy, because your brain isn't just focused on what's next," Stallion says. "That's what I do. Not a lot of people are capable of doing that."

Stallion is a strategic wrestler; he's always probing, looking for weak spots in his opponents. Tall and lean, his wiriness makes it difficult to predict his movements in the ring. Stallion's style is a little closer to classic wrestling — moves that, if you were wrestling in high school or college, would look familiar — than the flashy scripted spots often associated with sports entertainment.

He remembers telling his maternal grandfather, Curt Tidmore, that someday he'd be a wrestler like the ones he loved watching on TV. So when it came time to choose a ring name, he drew inspiration from his grandfather (as well as Stallion's own middle name, Curtis) and a favorite manga series, Fullmetal Alchemist.

"For the last name, I said Stallion, because I watch a lot of anime, and there was a character named Roy Mustang on [Fullmetal Alchemist], and I thought that was the coolest name. He had nothing to do with horses, it was just Roy Mustang. And Curt Stallion just worked."

Since moving to St. Louis to train under Elgin in 2015, Stallion's popularity on the indie wrestling circuit has soared. Glory Pro was one of the first promotions to give him a title (the industry name for championship belts), and he's gone on to wrestle in promotions all over the country and the world. In January, Stallion signed a contract with Evolve Wrestling, a Tampa, Florida-based promotion that has an exclusive deal with WWE to scout its talent.

Evolve exists on the same plane as many other American independent wrestling promotions, including Impact, New Japan, Revive Pro Wrestling, Ring of Honor and Game Changer Wrestling. In the industry, these promotions have fan bases as fierce and as loyal as WWE yet typically pack much smaller houses. Evolve's affiliation with WWE undoubtedly makes it attractive to wrestlers who, like Stallion, can hopefully use it as a farm team before being called up to the big leagues.

"My goal at the end of the day is to main event Wrestlemania, and I let it be known when I signed with Evolve, these are all the [other promotions] that I turned down, and this is me signing this contract because I'm going to go to WWE," Stallion says. "Wrestlemania, not just WWE. And I'm trying to get there as soon as possible, because I'm 29 years old."

During the second week of October, Stallion had two matches with current WWE wrestlers that may prove to be the most pivotal in his career so far. The matches — one with Kassius Ohno and the other with Cameron Grimes — were watched by WWE talent scout and retired wrestler William Regal. 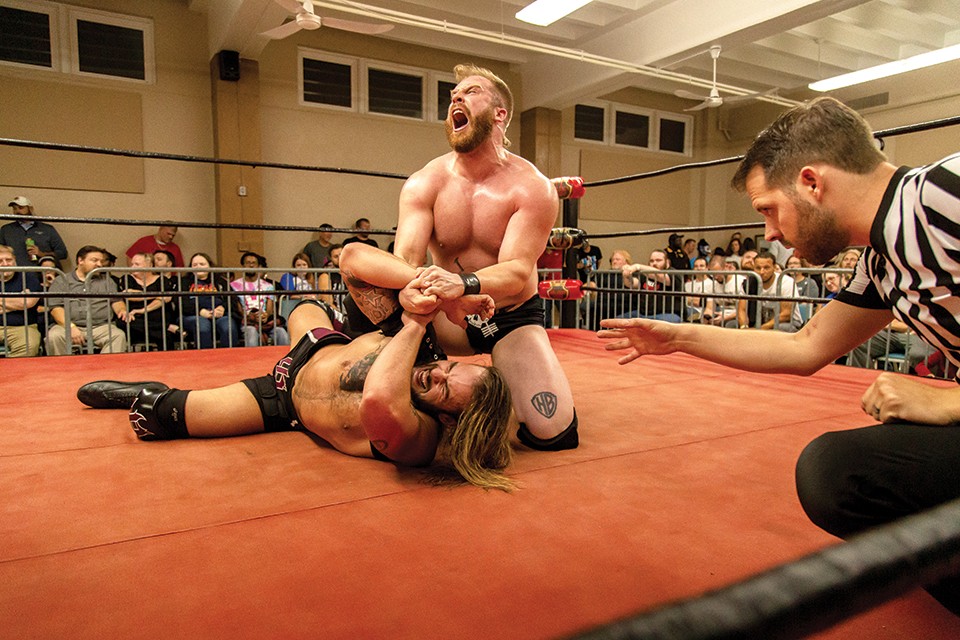 Wrestlers like Stallion and promotions like Glory Pro are coming up during a particularly pivotal moment in professional wrestling history. For the first time since the dissolution of World Championship Wrestling around 2000, WWE is again competing with another mainstream promotion, All Elite Wrestling.

Like WCW in the '90s, AEW is positioning its programming as edgier than WWE in both tone and opportunity and promising its wrestlers more creative freedom. Unlike WCW, however, AEW creative has been run by wrestling business veterans from the beginning, including New Japan Pro Wrestling alums Cody Rhodes and Kenny Omega. (And remember The Lucha Brothers from Glory Pro's first year? They're now starring on AEW.) The new promotion is also writing checks from the seemingly robust bank account of billionaire owner Shahid Khan.

For wrestlers like Stallion who want a future in mainstream professional wrestling, the rivalry between the two mainstream promotions could mean an even greater shot at breaking through. In advance of its first show on TNT earlier this month, AEW had been signing up popular wrestlers on the indie circuit for the better part of a year. Never to be outdone, WWE has become more aggressive with signing new talent as well, and recently repackaged its developmental wrestling program, NXT, into its own bona fide brand to directly compete with AEW. To some of the wrestlers signed, this means fame, fortune and validation after years of busting their asses in the indies, while to others, it's just the realization of a childhood dream that they long assumed was out of their grasp.

Since late September, NXT has aired a two-hour show on the USA Network on Wednesday nights, which just so happens to air during AEW's two-hour show on TNT. Fans have already christened the competing shows the Wednesday Night Wars, a callback to the Monday Night Wars between WCW and WWE in the '90s. And on October 4, WWE celebrated a big milestone: WWE's Smackdown Live debuted on Fox, the first weekly wrestling show to air regularly on a major broadcast television network.

Long story short, the energy and excitement in professional wrestling right now is huge for both fans and fighters, and there's a lot of doors opening and opportunity for both to enjoy. For promotions like Glory Pro, that hopefully means an expanding audience for professional wrestling in general and an interest in seeking out homegrown shows.

"The reason that Glory Pro has the benefit of helping younger guys out is because there are mainstream guys who still watch the indies, and by watch the indies, I don't mean that they just watch random Tennessee VFW hall, 40-people-in-the-crowd shows; they're watching shows like Glory Pro," Stallion says. "It's one of the more important places to be as a professional wrestler early in your career, and I've been very fortunate that I've been able to be a part of the entire journey of Glory Pro from the start."