From St. Louis, Foxing Is Taking Over the World 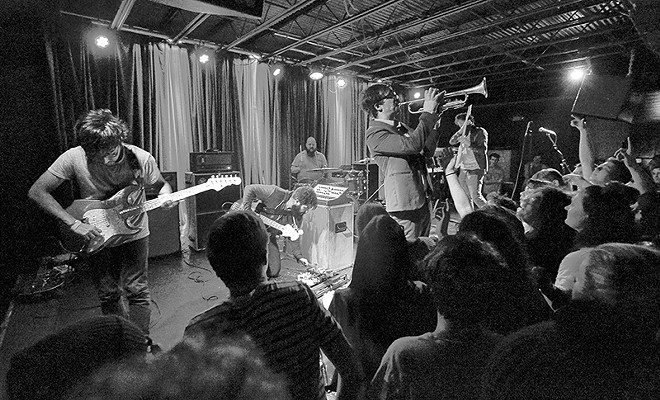 There's a dissonance between the music St. Louis quintet Foxing makes and the reaction it elicits from an audience. The group plays introspective, artful indie rock with classical flourishes, but to the sold-out crowd of 450 at the Subterranean music venue in Chicago, Illinois, Foxing may as well be playing pop punk or tough-guy hardcore. In eloquent terms, the audience is losing its shit.

The attendees sing along loud enough to drown out the thousands of watts of power pushing singer Conor Murphy's voice through the PA system. Some even jump on others' backs to mirror words directly into the singer's face. When Murphy blares out instrumental climaxes on trumpet, fans have an almost Pavlovian response to lift their cell phones and document the moment. During the closing number, Murphy trustfalls into the crowd while guitarist Eric Hudson drops his guitar into the audience, allowing them to share in the cacophony.

It's a sight to behold, but not a rare one on Foxing's autumn tour. A similar scene took place the previous evening in Grand Rapids, Michigan. The following day the spectacle repeats in Minneapolis, Minnesota. A YouTube search displays stage-diving in Austin, Texas, crowd surfing in Gainesville, Florida, and an audience storming the stage in New York City. All this for a band frequently described as ambient and often compared to notoriously tame groups like Explosions in the Sky and American Football.

"I don't know why people go absolutely nuts," says Foxing's bassist Josh Coll, 27. "Most of us come from the world where head-nodding is a sign of respect, so it's always a little bit weird when people go really crazy. At the same time, I'm not going to say that it's not sick."

"I think in my head I would prefer that people just stand there and watch, but it's so intoxicating to be in the midst of people screaming the lyrics," says Murphy, 23, the band's singer and trumpet player. "It's so validating to know people didn't just come here knowing the band; they came here loving these songs and knowing every line.

"That rowdiness is part of this weird collision of pop punk and emo and indie rock," Murphy continues. "The same kids that listen to punk bands like the Wonder Years and Modern Baseball come to see us and act like they would at those shows. At the end of the day, I think it's great. I feed off it."

That aptly described "weird collision" has been marketed as the "emo revival," a term for modern bands influenced by groups from the 1990s who used vulnerability as a form of rebellion. Originally labeled "emotional hardcore," and later shortened to "emo," these bands make urgent music that is a far cry from the alternative goth rock often associated with the genre (Fall Out Boy, My Chemical Romance).

Today, Foxing is considered one of the primary bands in the emo-revival scene. The quintet is not only a big fish in this small pond, but it's also the weirdest, most eclectic fish in the national stream. Far from a by-the-book emo band, Foxing's only direct musical connections to the genre are Murphy's occasionally frail voice and guitarists Eric Hudson and Ricky Sampson's penchant for clean tones.

The band's lyrics, though, co-written by Murphy and Coll, trade between poetic vagueness and brutal honesty. The more direct the sentiment, the more heartbreaking. In one of the band's most beloved songs, "The Medic," Murphy sings unguarded admissions such as, "She says you don't love me you just love sex," before a desperate but relatable chorus of "I want to be loved."

The same openness that informs the band's lyrics fuels its interactions with fans. On Foxing's Tumblr page, band members field questions about everything from gear and tour dates to song meanings and influences. Recently the band addressed an accusation that the song "Rory" is misogynistic, resulting in a lengthy, impassioned response from Coll. Even more recently, the band posted a photo of lyrics from its song "Den Mother" tattooed on a fan's arm.

That diehard fanbase is beginning to develop into something resembling conventional, measurable success. The week after Foxing's sophomore album, Dealer, was released on October 30, it peaked at No. 20 on iTunes' Alternative Albums chart and ranked 24th on Billboard's list of Top Independent Albums.

The band credits a community of loyal show attendees and Internet-savvy music obsessives. "When our first album came out, the major players in the music industry didn't care," says Murphy. "But people online did, and they were eager to tell their friends about this band nobody has heard of. That branched out and all their friends became the first people to hear about us.

"Even to this day there are still so many people who latch onto this idea that we are this band that nobody knows about. Something I love about Foxing is that people think it's this secret and they're the only ones that get it."