MABEL SUEN Kim Bond and Ross Lessor have found a new way to get their food to people with Gooseberry at Fortune.

Kim Bond remembers the exact moment that culinary genius struck. A few years ago — back when self-serve food buffets were a real thing and not a relic of the Before Times — she and her partner, Ross Lessor, loved running pizza nights at their Dutchtown restaurant, Gooseberries. It was a weekly spectacle, when they'd shut down the rest of their offerings and put out pans filled with all kinds of pizzas, sometimes asking their guests what toppings they'd like to see on the next batches.

One night, a customer came in during pizza night craving one of Gooseberries' St. Paul sandwiches. Disappointed that they weren't available, the man was about to head out when Bond had an idea: Why not make a St. Paul pizza? She went back in the kitchen, cooked up a giant egg foo young patty, baked it into a crust, slathered the entire pie with a generous layer of mayonnaise, then topped it with chopped pickles, lettuce and onions. Instantly, she knew she had a hit, a realization confirmed when she found herself back in the kitchen making five more of the creations before the night's end.

This sort of whimsical, why-not approach to food has been the defining characteristic of Bond's and Lessor's cooking style since opening Gooseberries in 2014. It also describes their new venture, Fortunate at Gooseberry, a partnership with the Fortune Teller Bar that launched this past October. Since then, Bond and Lessor have taken over the bar's food window and kitchen, providing carryout — and now outdoor-only dine-in — meals to those looking to enjoy their food and support the two businesses.

Though Fortunate Gooseberry was in the works prior to the pandemic, COVID-19 informed the way the concept took shape. In March of last year, Bond and Lessor indefinitely shut down Gooseberries and immediately began running a food pantry out of the restaurant. A few months later, they decided they needed to figure out a way to support themselves and their guests, so they launched a weekly program, called the Weekly Hookup, wherein guests could purchase a generous basket of goodies designed to get them through the week.

Still, this was a far cry from running a full-fledged restaurant. Bond and Lessor realized that they needed to find an additional way to pay the bills — similar to the predicament that the Fortune Teller found itself in — so they decided to partner up with the bar to offer takeout food and cocktails this past October. The response was overwhelmingly positive and has only grown now that the bar has reopened its outside seating area in the back courtyard.

The setup is ideal for the current climate, with several options for contactless ordering. Guests can either order online before arriving, scan a QR code from their patio table, or they can use the bar's outdoor, self-service kiosk — all systems are integrated so that there is seamless connection between the separate bar and food sides of the business. For those who choose to take their food to go, there is a carryout window at the front of the building. Guests wishing to dine on the patio enter through a long, narrow walkway to the right of the bar's front door. Did I mention narrow? It's a squeeze that can be either quirkily charming or claustrophobic, depending upon your inclination. For those who either aren't into the tight journey or cannot access it, Bond says she and anyone else at Fortune Teller are happy to accommodate by taking patrons through a different entrance on request.

No matter which way you choose to dine, you will be treated to an outstanding food experience. As Bond explains, she and Lessor don't necessarily have a particular style of cooking inasmuch as they have an inclination toward classic dishes on which they put their own, self-described "weird," spin. Bond may call the food weird, but the more appropriate descriptor is magical, as evidenced by the fried bologna sandwich, a seemingly humble offering done extraordinarily well. Layers of fried, thick-sliced bologna and sliced cheese are stacked upon airy white bread like a towering melt. A bagel sandwich is equally impressive. Unlike typical iterations of the form, in which the filling is dwarfed by the bagel, here, the everything-seasoned boiled bread can barely contain the perfectly fried egg, cheese and thin-sliced fried potatoes. It's like a breakfast buffet in sandwich form. 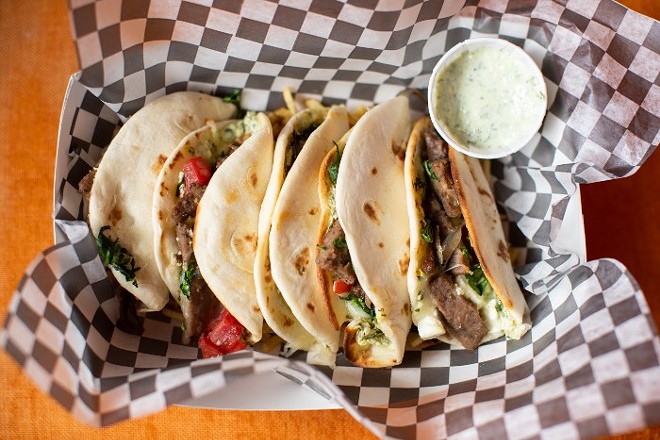 Gyro tacos also impress. Hunks of seasoned lamb are tucked into small, fluffy shells that taste like a marriage of a flour tortilla and a pita. Tzatziki, tomatoes, lettuce and cucumber garnish the tacos, each providing a different layer of texture that survives the takeout experience — as does the presentation. The five-piece order is presented in such a lovely, uniform style you'd think it was prepared by a food stylist for a photo shoot.

The pizza taco, on the other hand, is a delightful mess. Inspired by Bond's mom, who could not decide one night if she wanted pizza or tacos for dinner, the dish consists of a cheese pizza, garnished with sour-cream-dressed lettuce, folded in half. It's like an overstuffed quesadilla with the unapologetic pleasure of a Jack in the Box taco.

Bond spent several years as the pastry chef at Frazier's, so it's no surprise her hand pies are magnificent. She regularly changes up the fillings — on this occasion I enjoyed the piquant smoke of banana peppers and bacon — but no matter what variety you get, the scene-stealer is the crust. Flaky and baked to a golden brown, it's a glorious canvas for whatever concoctions she's filling it with on that particular occasion. 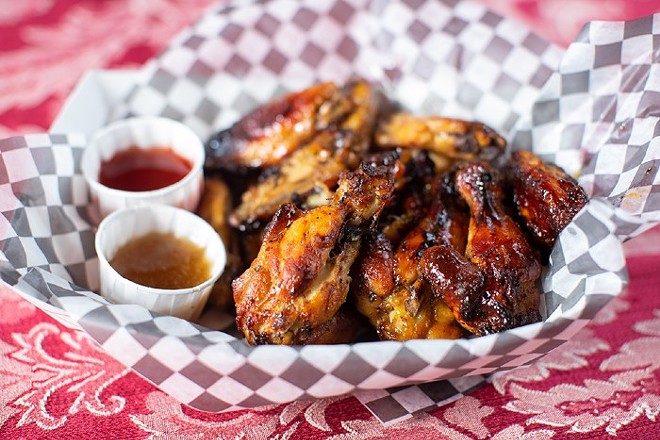 Even straightforward dishes have special touches that set them apart. Honey lemon pepper wings are juicy and coated in just enough char to crisp the outside skin. The accompanying chili-infused dipping sauce is sweet on the first taste, but its significant heat creeps up on you and lingers well after you finish the dish. An order of fried tofu, a Gooseberries fan favorite, comes with three different varieties; on this particular night, Lessor had made his famous "KFT," or Kentucky Fried Tofu, a version that rival's the Colonel's special recipe; a country-fried steak version; and a sesame ginger varietal. Three housemade dipping sauces — sweet and sour, teriyaki and grape mustard — accompany the dish.

Bond and Lessor say that their mission has always been to provide a joyful experience for people to eat their food. It's been an especially difficult feat this year, considering how necessarily transactional dining out has become. However, even with the online ordering and self-service kiosks, they've managed to succeed in creating a soulful experience by giving diners something that is unique and clearly representative of who they are — that their St. Paul pizza is one of the best things you'll eat this year doesn't hurt either.

Correction: The original version of this story had the name of the restaurant wrong. We regret the error.