Forget Me Not: Upstream Theater offers a powerful glimpse into the collateral damage of British Imperialism 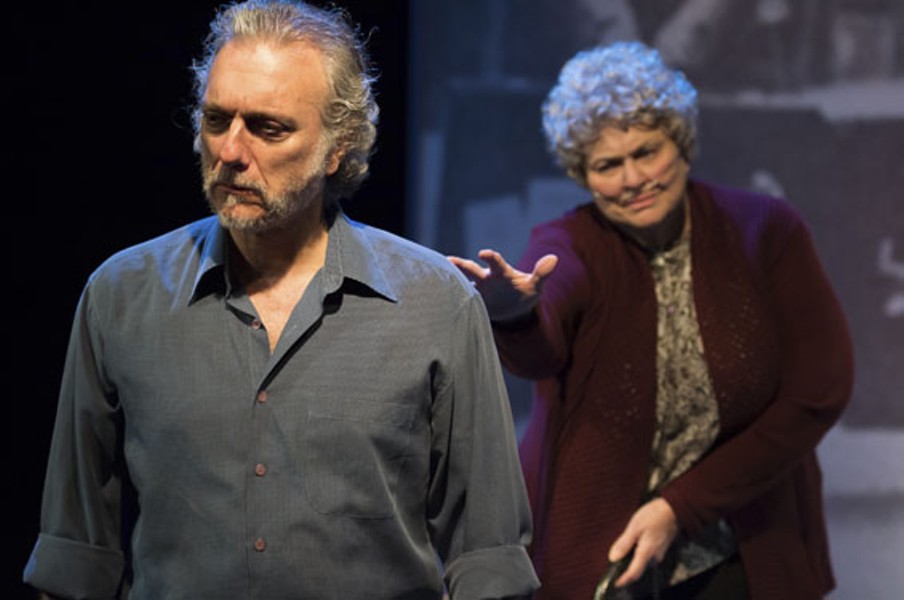 ProPhotoSTL Jerry Vogel's long trip home in Forget Me Not.

Forget Me Not: Upstream Theater offers a powerful glimpse into the collateral damage of British Imperialism

Gerry Connor, the boozy, mercurial and broken orphan at the center of Tom Holloway's Forget Me Not, is a man unlucky, unkempt and unknown. As a child growing up in Liverpool, Gerry was taken from his mother at the age of four and shipped to Australia, where he, and thousands like him, became a child migrant, sent forth by the British government after World War II to populate the Crown's far-flung empire with "good, white British stock." For Gerry, the central character in Upstream Theater's U.S. premiere of this agonizing play, that meant a shoeless childhood spent laboring on a farm, his birthday uncelebrated, his identity erased and his mother, who had in fact pined for him all those years back in England, thought dead.

"There are things," he says near the end of this powerful play. "Things I don't know how to...things that happened. Happened to me, and...I don't know what to tell you."

As this elliptical drama unfolds, Gerry, played here with marvelous emotional dexterity by Jerry Vogel, has arrived at his mother's home. Now in his sixties, Gerry is a man defeated. His gray hair droops languidly across his brow, and his grubby shirt clings tightly to his waist. He's well mannered, albeit in that tentative, careful way that a man given to drink, rage and regret adopts in moments of formal sobriety. He's turned feral and anxious from his years on the farm, speaking in mysterious fits and starts as he repeatedly asks his mother, of whom he has no memory, where to sit. "Just tell me where you want me to sit!" he finally blurts out.

But his mother, Mary, played here by a superb Donna Weinsting, only dotes, searching for her child's reflection in the sad man that stands before her. "[I]t's amazing you still have those lovely big, bright eyes," she says, reaching across the oceans and decades of misery that divide them, "considering everything that you've been through."

But we don't know what all Gerry's been through. It's maddening, really. Back home in Australia, he's a widower whose drinking and destitution have reduced him to an unwelcome guest in his daughter's home. Unable to describe what drives him to drink and destroy, Gerry swells with incoherent silences, momentary eruptions and quicksilver apologies. He's an enigma, but eventually his daughter, Sally, a by turns timorous and powerful Maggie Conroy, convinces him to meet with a charity that reunites child migrants with their families. His caseworker, Mark, played with delicate understatement by Terry Meddows, soon discovers that Mary is still alive (though in bad health) and arranges for Gerry to return to Liverpool to reunite with his dying mother.

Working on Michael Heil's spare, unchanging set, Forget Me Not traverses two continents and several locations as the excellent cast stalks about one another, enacting this drama whose candid emotionalism can at times seem out of step with our jaded age. Heil's stagnant set can be distracting at first: a clock ticks faintly in the background throughout the first act, and a teacup from a scene in England is left ignored onstage when the action shifts back to Australia. It happens again and again. But as the set becomes progressively littered with unnoticed cups, plates, napkins and picture frames, it becomes increasingly clear that something else is afoot. Director Philip Boehm is slyly leaving us hints of the subtle twist to come: not only are the seemingly conventional and somewhat maudlin dimensions of this drama not at all what they appear, but Gerry, onstage for all but one scene, is arguably not even the protagonist.

It would be unfair to say more, but rest assured that in the very capable hands of Boehm, Vogel and Weinsting, Forget Me Not sheds its orthodox skin, revealing itself as a larger, double tragedy that carries an emotional weight as heavy as it is unexpected. 