Rob Connoley and Justin Bell see the landscape differently than you do. You, Connoley and Bell all inhabit the same St. Louis. But you live in a city with trees. They live in a forest with buildings.

That forest isn't just scenery. It's the source of the food Connoley intends to serve at his new restaurant. Other chefs boast about obtaining organic produce from local purveyors. Connelly picks his own produce from the most local purveyor there is: the forest floor.

In April Connoley and his sous chef, Bell, both Missouri natives, will open Bulrush, an Ozark-inspired restaurant in Grand Center for which the two chefs intend to forage their own ingredients, then craft ever-changing tasting menus. For many, that sounds certifiably insane, a locavore gimmick taken to its logical extreme. For Connoley and Bell, it's the only way they can know what they're serving.

They make good partners. Connoley, 50, is the James Beard-nominated former chef of New Mexico's acclaimed Curious Kumquat, which also relied on locally foraged ingredients. Two years ago he published Acorns & Cattails, a foraging cookbook and guide. His sous chef, 30-year-old Bell, has no James Beard nominations, but Connoley would be lost in the woods without Bell's St. Clair-bred foraging expertise. A sleeve tattoo covers Bell's left forearm, featuring bright red sumac berries, garlic mustard, lavender bergamot, sassafras, milkweed, chanterelle mushrooms and an elderberry climbing up his triceps. "I remember eating wood sorrel a lot as a kid, not knowing what it was, just knowing I liked the way it tasted," he says.

In December, Connoley came upon a persimmon tree in a park in south city, naked of leaves and pregnant with round, orange fruit. It's a rare find; persimmons ripen in September, but this one had escaped foragers both human and animal.

Foraging is a game of speed and opportunism. Connoley raced home and returned with several bags, picking and plopping whatever he could reach from the ground. I need to buy a telescoping pole and a hook, he thought, gazing up the 30-foot trunk. Still, he squeezed 20 gallons from the fruit he reached.

A few days later, he's driving out to the Missouri River, a 24-foot telescoping pole and paint-rolling hook poking both ends of his hatchback. Bell sits shotgun. In the backseat rides a blue IKEA sack filled with 100 pounds of persimmon mush and an orange rubber raft that Connoley bought to reach islands that might harbor morels.

At this time of winter, there might be oyster mushrooms, wood ear mushrooms, chickweed, garlic mustard, spicebush. As they reach the site, it's 25 degrees and Connoley is wearing shorts. The area they wanted to forage is flooded, a distribution problem unique to their restaurant. They settle for a 100-foot-wide strip of seemingly barren, frozen riverbank woodland. 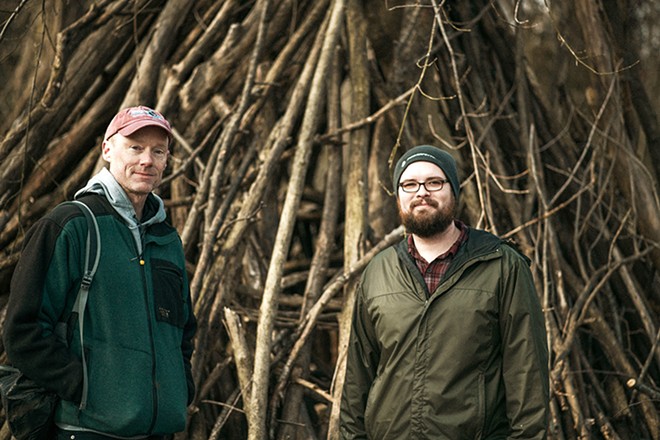 "That's the area I like working the most, is that strip," he says, pointing across the water. "That's confidential, by the way." Once, Bell and Connoley found the perfect chicken-of-the-woods mushrooms off trail somewhere. They carefully covered the fungus with branches, waiting for them to grow even larger. When they returned a week later, the mushrooms were gone, replaced by a laminated card taunting them: "That was a beautiful chicken of the woods we were both watching. I'm going to really enjoy them tonight."

Automatically, Connoley and Bell split off into two parties, seining the woodland for oyster mushrooms. In less than a minute, Bell stops and stoops.

Velvet shank, he says. "The wild version of Enoki mushrooms, but you have to be very, very sure, because deadly Galerina looks almost exactly like this. The gills are a little darker and it has a partial veil, which these don't have."

"And we're standing in chickweed," Connoley adds, looking down.

Chickweed is a green that tastes like uncooked peas, Bell says. "It's kind of nice to give someone a fresh green salad in the winter that didn't come from a hot house or something."