For Orlandez Lewis, 2016 Brought a Promotion at Vintage Vinyl and a Show on KDHX

PHOTO BY KELLY GLUECK Orlandez Lewis first got hired at Vintage Vinyl — his "dream job" — at the age of eighteen.

An eight-year veteran of Vintage Vinyl at the ripe old age of 26, Orlandez Lewis has scored a couple of nice wins as a sour 2016 is passing: securing a role as promotions and marketing manager of the landmark record shop, then landing his own Friday night radio show on KDHX (88.1 FM).

Lewis says that "Night Grooves" offers "feel-good vibes. It's a nice little segue into the weekend of just positive music. Anything from rock to soul to jazz. It's it's got a nice positive, optimistic vibe, then it's in the gist of the show and the vibe I try to bring across."

"Night Grooves" is a show that bumps James Brown against Hiatus Kaiyote and Earth, Wind & Fire alongside Talking Heads. The "Grooves" half of the show's name isn't without meaning. Since August 5, Lewis' funk and soul-inflected, rock-dappled program has occupied the slot long held by one of the station's indie-rock linchpins, Ryan Heinz's "Coin-Operated Radio."

The new program almost didn't happen — due not to lack of desire from station or host, but through a classic case of misunderstanding.

Two years ago, KDHX DJ Doug Morgan was trying to get Lewis a show. "It was kind of weird," Lewis recalls. "I did a tour of the station, cut a demo and everything. They told me they'd look it over and send it to the committee. Then a good year passed and I didn't hear anything. I just thought it was a great experience and was what it was."

But in April, Lewis participated in KDHX's Listener's Cut event at Vintage Vinyl. Andy Coco, the station's chief media production officer, referenced the idea of getting a Lewis a show. "We didn't hear anything back from you," Lewis recalls him saying. "'Well, I didn't hear anything back, myself.' Turns out there were some personnel changes and things might've gotten mixed up. Earlier this summer, Andy told me a show was opening up. I said, 'Sign me up.'"

Of course, as any new host will attest, KDHX listeners are an idiosyncratic lot, growing accustomed to their favorite shows and losing their collective minds when a program disappears or moves. Some might suggest songs from their own wish list, rather than ones that make sense for the genre; for others, if it's not blues or bluegrass, you'll get an earful. It's not without reason that a few hosts only communicate with fans on Facebook or texting, rather than picking up the air line.

Lewis got his share of wacky requests and feedback, but weathered the early storm. Quickly, he found his own audience and a week-by-week sense of enjoyment and growth.

"I gotta say, the first show was a bit nerve-wracking," he admits. "The most radio I'd done was my senior year of high school, and I graduated almost ten years ago. It was interesting. Some [requests] were dedicated to Ryan and 'Coin-Operated.' Others were like, 'You might wanna do this, do that, play this, play that.' I was listening to them, but having fun with it. 'Sure, OK, thanks for the feedback.' But during that show someone called and asked if it was my first show. I said, 'Yeah, it is.' And he said, 'Oh my God, you're hitting it tonight. I'd ask you to play something, but you're already going to play it.' That really definitely means a great deal and keeps me going."

Throughout each episode, Lewis tinkers with updates on the show's Facebook page. "I want listeners to know I'm not a robot and that there's a real person in-studio," he explains. After shows, he pops in the two CDs that he's recorded from that night's show and begins the process of critiquing them, thinking about everything from song-to-song segues to his ability to connect with listeners during the every-fifteen-minute station breaks.

For Lewis, shows typically come together over the course of a week, a process that's aided by his 40-plus hours a week at one of the city's music meccas. Constantly exposed to new acts through coworkers and customers alike, Lewis already possesses a ridiculous amount of music knowledge inside his young brain, his show built by a true collector and curator. That's kinda tipped by the fact that he started at eighteen at Vintage Vinyl, a place not known for hiring teens.

"My dad started taking me to Vintage when I was eight," he says. "I was into his record collection when I was six. After I got tired of his collection, he said, 'I'll take this dude to Vintage.' Every time I got allowance, he knew where to take me. I'd been going for almost ten years when I put in an application. On New Year's Day in 2009, they called me in for an interview. I worked there part-time from 2009 to 2014, when I graduated from college and went full-time. After that, the rest is history."

When the shop's long-time promotions director Jim Utz moved down the block for a gig at the new Delmar Hall, another rare opportunity arose.

Lewis remembers, "[Utz] pretty much came to me with it. He saw my vigor and passion for live music. He went to the owner and said, 'This guy needs to do this job.' He taught me a lot. I'm still managing on the floor, making a ton of contact with the public.

"One of the things that happened — and it's from working at Vintage — is that I've met so many people, just from the art of loving music so much," he adds. "When I started at Vintage, it was like, 'One of us! One of us!' The customer base, the regulars that come in, make it tight-knit. It's the same thing here [at KDHX]. I'm becoming very good friends with people in the organization — listeners as well."

As Lewis talks about music — how his dad is still his main inspiration and how Michael Jackson and Prince fall in as No. 2 and No. 2A; about his love affairs with Led Zeppelin and '70s progressive rock — he does so in an understated way. He's not bouncing off the walls, but instead exudes a subtle, overall sense of being totally cool with how his life's going and the soundtrack that he's able to create for it. Even on this night, a show airing just three days after the election, he says that he's going to be "a bit selfish" in the "more spiritually vibed" playlist.

And as he talks outside the station's main studio, a voice is coming from inside it: Art Dwyer is winding down another Friday afternoon, riffing about the then-upcoming super moon and playing St. Louis' classic Quartette Tres Bien. There's no transition between shows on KDHX that more neatly ties the station's past and present; Dwyer's been on air since week one and has been broadcasting since Lewis' birth, providing institutional knowledge, even as the young guy breathes some life into a program rotation that's sometimes felt stuck in the rut of tradition.

On Fridays, Lewis likens his show to his house, where he can fan out albums on the floor and "really just listen to music."

He says, "It's really great when I spread that mass out, like everybody's in your living room. 'Check out this new song I heard at the store.' 'Check out this old cut I'd forgotten about.' It really helps bring in the weekend quite right." 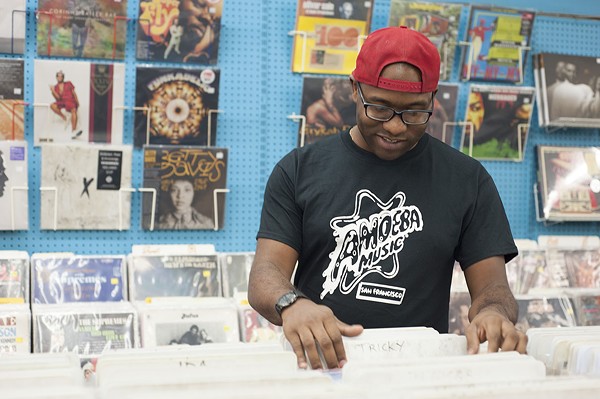