PHOTO BY ALLISON BABKA A cow at Marcoot Creamery

Greenville, Illinois, is a hotbed of weird activity. Just ask anybody who's felt the sting of the town's spanking machine.

No, the hamlet with the quaint downtown isn't the cornerstone of the region's S&M community (alas?), but it certainly has one of the nation's most interesting cheap thrills in the DeMoulin Museum (110 West Main Street; 618-664-4115). If the DeMoulin name sounds familiar, that's because it's currently the largest and oldest manufacturer of marching band uniforms in the world. But the same company that makes sequin jumpsuits used to be known for products that were a lot stranger, and it only takes a 45-minute drive due east from St. Louis to experience the weirdness.

As it turns out, long before bands were playing "Tequila" at halftime, the DeMoulin family was pranking members of fraternal orders with trick furniture and fake goats. In the 1800s, exclusive societies were a big deal, and longtime members played jokes on the noobs to test their devotion. The three DeMoulin brothers, experts in different trades, created some of the nation's most elaborate, bizarre and celebrated initiation devices.

The DeMoulin Museum has collected a large number of these rare, odd contraptions. Curator John Goldsmith leads curious souls through the tiny free museum, showing off both band fashions of yesteryear and amusing frat pranks with a twinkle in his eye. Visitors can touch (and even try out) many of the strange items, and Goldsmith takes every opportunity to create "gotcha!" moments, with a guillotine blade that drops precariously over a victim's neck and a chair that collapses to the floor. If you've ever wondered about the origin of those hand buzzers at Spencer's Gifts, look no further than the DeMoulin. And when Goldsmith asks you to bend over on a platform, do it, but only if your ass doesn't mind a little stinging.

The highlight of the museum is the goat — several goats, in fact. The goat machine is a board made up to look like a real goat. It can be attached to long handles, a rickshaw setup, a hamster-type wheel or other variants. A blindfolded initiate would sit on the "animal" while senior members carried him and the contraption around or pushed him like they would a wheelbarrow, apparently to great comedic effect. These days, truly old goats are quite rare, but the DeMoulin Museum has several in varying condition, creepy peeling wool faces and all.

A museum visit could take 30 minutes to an hour or more, depending on your level of interest in fraternity hijinks. Afterwards, you'll want to drive ten minutes south to Marcoot Jersey Creamery (526 Dudleyville Road, 618-664-1110), a cheese haven the entire family can enjoy. The Marcoots are a legacy farming family with dairy roots dating back to the 1800s, and sisters Amy and Beth Marcoot now run the business. They're well-known in the region for their superior havarti, gouda and cheese curds, among other artisan treats.

Visitors can tour the farm and meet the Jersey calves that will grow up to produce milk for the cheese. These babies are as adorable as they are useful. Hang around and you may even get to glance outside the barn to see a farmhand shepherding hundreds of adult cows from one pasture to another. Stampede!

From there, visitors can wander into the milk parlor for an explanation of the milking process and a glimpse at the machines that gently squeeze the good stuff from the bovines. After that, it's into the creamery, where large windows showcase the cheese-making process. Depending on the tour type, the Marcoots might bring out a few samples.

No visit to a creamery is complete without a walk inside the country store. Buy Marcoot cheeses along with the farm's own beef and pork, local beverages and onesies declaring your baby to be a "future cheesemonger." Don't leave without a few scoops of ice cream.

A tour is bound to leave you famished, so refuel with down-home cooking at Blue Springs Cafe (3505 George Street, Highland; 618-654-5788) on your way back to St. Louis. Blue Springs serves up absurdly large portions of fried chicken, catfish or chicken and dumplings, often for under $10. Vegetarians aren't left out of the fun; the veggie burger and several sides — including the creamiest mashed potatoes we've ever had — are meat-free. Make sure to save room for dessert, because as the billboards on I-70 attest, Blue Springs is known for its delicious "foot-high pies." Bring your cash or check, because this place doesn't take credit cards. 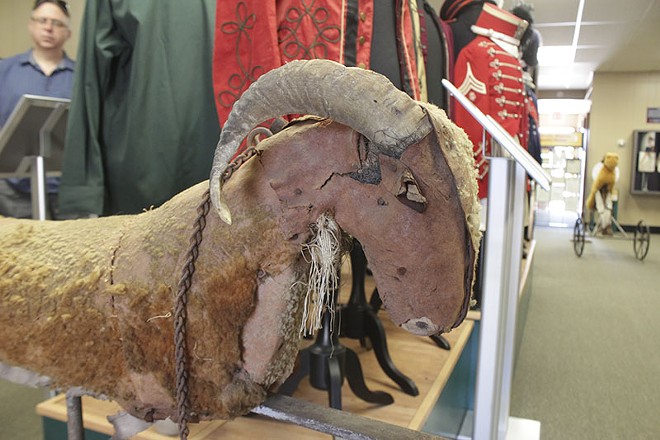