MABEL SUEN With items named "Pepperonius Monster," "Rocky Mountain Thigh" and "Zippity Do Das," Firecracker could put anyone in a good mood.

When Chip Schloss opened the current iteration of Atomic Cowboy thirteen years ago, the Grove neighborhood had a sparsely populated commercial strip, its only light coming from the LGBTQ bars that pioneered Manchester Avenue as a nightlife district. Then came the other bars, the craft breweries, the music venues, the comedy spots, the yoga studio and the restaurants, turning the slice of St. Louis between Kingshighway and Vandeventer into one of the city's most thriving destinations.

If one glaring hole remained in the Grove's full-entertainment smorgasbord, however, it was a pizzeria. Schloss knew pizza was a no-brainer in an area filled with hungry bargoers, so he kept expecting to see one open. When that didn't happen, he actively courted a few concepts in an effort to fill the gap, yet none of them worked out. Finally, he decided to take matters into his own hands.

Seeing the need for a pizzeria was the easy part — figuring out what it would look like took a couple years' worth of research, development and late-night back-of-the-napkin spit-balling. Schloss had been working with restaurant consultants, and one day, while trying to nail down a crust recipe, inspiration struck. One of his longtime cooks had made chile rellenos for Schloss' lunch and presented them just as he was getting ready to try out a simple cheese-pizza recipe. Schloss looked at the relleño, looked at the pizza, and promptly placed the two together, smashing the cheese-baked chile with his fork into the already-cheese-covered crust. At that moment, Firecracker was born.

Schloss was not alone in recognizing the culinary possibilities for what he's referred to as "pizza without borders." After that initial relleno-induced "aha!" moment, he began looking at what was going on in cities like Portland and Austin. He noticed that pizza trends had moved away from traditional notions of "authenticity" in favor of globally influenced flavors. Seeing his crust as a blank canvas with endless possibilities gave Schloss the freedom to play around with all of his favorite foods — Mexican, Mediterranean, Indian. He was so inspired, he couldn't sleep one night and ended up writing the majority of Firecracker's specialty pizza offerings at 4 a.m.

In the time since Schloss began dreaming up a pizzeria, his concept has seen other partners come and go even as the U.R.B. Urban Research Brewery popped up down the road, offering whole and by-the-slice wood-fired pies to enjoy while sipping Urban Chestnut's experimental, not-yet-to-market beers. (If you haven't yet visited, do. It's excellent.) Theoretically, this might make Schloss' point about the lack of pizza in the Grove moot, except that Firecracker is so different from a traditional pizzeria that there is more than enough room on Manchester for both. 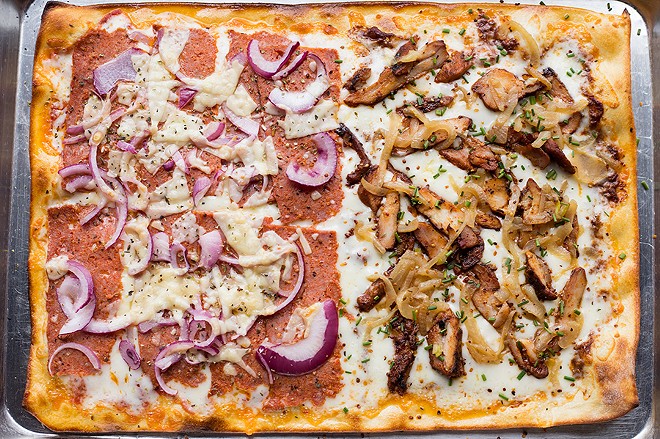 For starters, Firecracker's crust is entirely different than the New York-meets-Neapolitan triangles down the road. Here, the dough is formed into a rectangle and sliced into squares that are evocative of St. Louis-style pizza in geometry only. Unlike the flimsy cracker squares that heave under the weight of a single sausage crumble, these slices are sturdy enough to withstand even the most generous toppings and bake up like a fried pita chip around the edges.

Yet the similarity between Firecracker's crust and, say, Imo's, is intentional. Schloss wanted to pay homage to St. Louis pizza without being literal, a factor that also went into his choice of cheese. Instead of Provel, he's chosen a blend of three white Mexican cheeses that gives the rich, gooey satisfaction of processed cheese without that gloppy, stick-to-the-roof-of-the-mouth problem with Provel. Naysayers beware: This is St. Louis-style pizza for people who hate St. Louis-style pizza.

If crust and cheese differentiate Firecracker's offerings from other area pies, its toppings place them in a category all their own. Though a few have the ingredients you'd find at a traditional pizzeria, most are completely different, such as the "No Sleep 'til Brooklyn," which successfully plays off the idea of a Reuben sandwich with a smoky, white-sauce base called "FPB sauce," sauerkraut, tangy Swiss cheese, a drizzle of Thousand Island dressing and a caraway-seed sprinkle. On this version, Firecracker substitutes turkey pastrami for corned beef; the meat is surprisingly tender and succulent with just a whisper of salty brine. 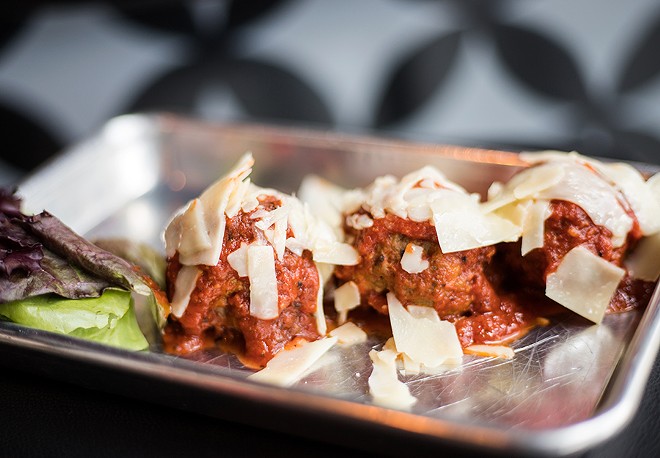 The same sauce is slathered over the dough and dressed with thick round slices of roasted potatoes, bacon crumbles, corn, caramelized onion and strips of poblano peppers for the "Spuds Rodriguez." The pepper's heat, the corn's sweetness and the salty smoke from the bacon infuse into the cheese and potatoes, making this a shockingly well-executed pizza version of a potato skin. Who would've thought?

Though I love Indian food, I'm on the fence about the "Shiva's Revenge," a sub-continental firepot of flavor. Curried hummus stands in place of sauce, which is then covered with eggplant, potatoes, pickled cauliflower, mint and tamarind chutney. The flavors were so intense that they became muddied, never taking the dish from "interesting" to "enjoyable."

Schloss offers monthly specials, and for August he collaborated with Dave and Meggan Sandusky of BEAST Craft BBQ for a barbecue pork-steak pie. This is a hefty, one-slice-will-do-you behemoth of a pizza — exactly what you'd expect from the folks serving the world's biggest and best pork steak. Goat cheese, jalapeños and BEAST's signature Brussels sprouts adorn the dish, but the standout, of course, is the pork. Pulled apart into thick chunks, it makes you wait with bated breath for the moment these barbecue masters move into the neighborhood.

Though Firecracker trades in quirky, unexpected pizzas, its best offering is also its most conventional — if you can call the "Pepperonius Monster" conventional. In place of traditional greasy rounds, Firecracker's pepperoni is cut into thick strips that cover every inch of the pizza. The preparation is akin to really good gyro meat: tender, slightly crumbly and glistening with fat that beads up on the gooey cheese. A dusting of lavender-infused oregano coats this meaty beauty, giving a vibrant perfume to the garlicky, paprika-flavored pepperoni. It's a masterpiece.

Aside from pizza, Firecracker is serving a handful of appetizers, most of which fail to make the case for blowing your appetite before the main course. The "Screamin' Mimis," a riff on boneless Buffalo wings, is a platter of sliced smoked chicken thighs, basted in a Nashville-hot-chicken-style chile oil. The meat was dry, which was fortunately mitigated by the accompanying FPB white sauce and a sticky sweet "ninja" sauce that tastes like a spicy version of sweet and sour.

"Cherry Bombs" sounded delicious: Beef and pork meatballs stuffed with blue cheese and cherry-pepper relish. In reality, there was no stuffing anywhere to be seen. Instead, they were just basic meatballs covered in an oregano-heavy tomato sauce. Fine enough, but the failure to live up to the billing was disappointing. More enjoyable were the "Sizzlin' Whisker Biscuits," an excellent version of potato skins with zesty FBP sauce, bleu cheese, bacon and cherry-pepper relish. These did not just hit the mark of a good bar appetizer; they far exceeded it.

However, if you opt to instead save room for dessert, you will not be disappointed. A habanero, honey-and-orange-zest-infused chocolate-chip cookie is a beautiful balance of heat and sweetness, and the chile-spiced cinnamon brownie is so fudgey it's like half-cooled chocolate lava.

You'll want to linger over the desserts — and drinks, of course — which was Schloss' intention for Firecracker. Originally, he toyed around with the idea of fast casual but was so put off by the idea of having his customers wait in line for their food to be cooked that he opted instead for a full-service model. The room is the sort of place you'd want to crush pizza and drink beer: Loud, lively and outfitted in an inviting exposed-brick aesthetic with front and back windows that look out over bustling Manchester and the back patio, respectively.

Not all that long ago, had you looked out those windows and onto the streetscape out front, you'd see the gay bars and empty storefronts that formed the structure upon which today's Grove was built. But for years, you wouldn't have seen a pizzeria, even as the area began to explode. Firecracker is a concept that was a long time coming, but thankfully, it has finally arrived.