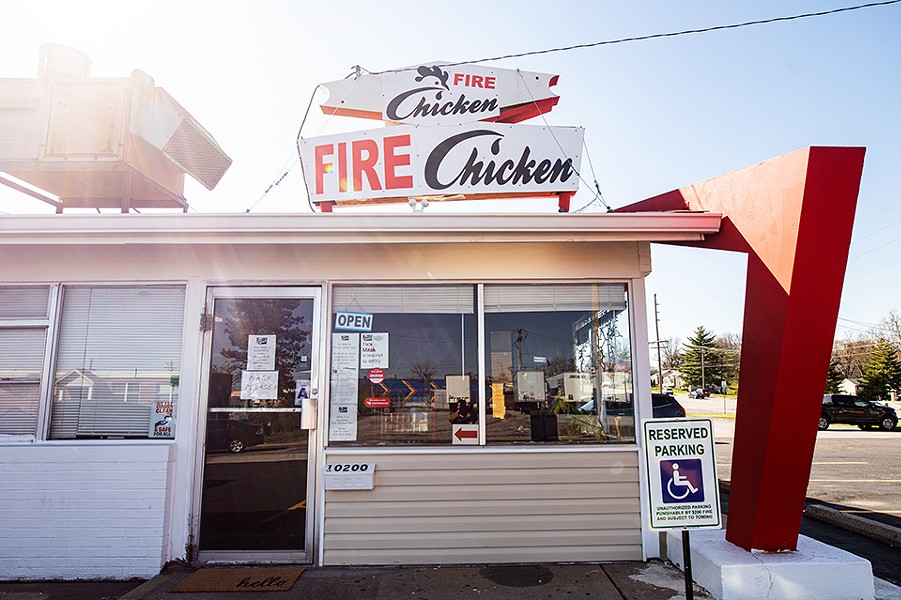 MABEL SUEN Fire Chicken in Overland has quickly become the place to go.

Michelle Baik knows her food is good. Ever since she and her husband, Min, opened Fire Chicken this past August, customers have gone out of their way to heap praise on the pair, telling them over and over just how much they enjoy the restaurant's namesake Korean-style chicken gangjung.

However, one recent interaction stands out to Michelle. A first-time guest was so moved by the Baiks' cooking that he was compelled to come back and tell her how much it meant to him. His praise had less to do with the food itself and more to do with his appreciation for their willingness to share with him a taste of their culture. "You're showing me who you are, and that is really special," the man told Michelle. His words hit her so hard that she was moved to tears.

The comments from that overjoyed diner are particularly poignant for the Baiks. For ten years, they owned the St. Peters sushi spot Blue Sea, always dreaming of opening a restaurant that would showcase the cuisine of their Korean homeland. They knew in their hearts that their food would be well received, but family circumstances prevented them from taking the leap. Instead, they spent their days and nights cooking Japanese food, and then made their way out of the restaurant business for a decade.

Now, twenty years after getting their start at Blue Sea, the Baiks are finally realizing their dream of bringing their unique take on Korean cuisine to St. Louis with Fire Chicken. Though Min has been developing the idea for decades, he really got serious about two years ago and began fleshing out ideas for how he wanted the restaurant to run. Conceived of way before the COVID-19 pandemic upended life as we knew it, the restaurant has an ideal setup for dining in the current climate. Min always envisioned Fire Chicken as a delivery and carryout operation, and drawing upon his and Michelle's experience in delivering food themselves, he made sure to set up his systems to be friendly to that way of dining. He and Michelle also take special care to know the ins and outs of every delivery platform they use, and they work closely with drivers to ensure accuracy and timeliness.

Min spent just as much time developing his recipes, working — and, he laughs, fighting — with his family about getting the flavors just right. Though he takes traditional Korean dishes as a jumping-off point, he insists Fire Chicken is not a traditional Korean restaurant. There is no kimchi on the menu, nor other dishes that you'd typically find at a Korean spot. Even the gangjung is different than what you'd typically find in Korea; there, the dish is served at room temperature, while his version is fried to order and piping hot. 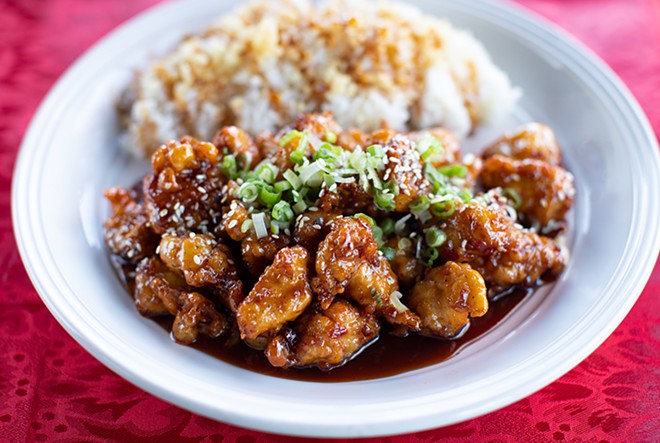 Min proves that a break with tradition can have delicious results. Reminiscent of a hot braised chicken found at American-style Chinese restaurants, the namesake Fire Chicken gangjung pairs nuggets of breaded chicken that are fried to a glorious golden crisp with a flaming-hot sweet soy sauce glaze spiked with red chiles and jalapeños. At its default spice level, the chicken is fiery even for this heat-lover. However, the layers of sweet, salt, spice and umami make it so flavorful the burn becomes an afterthought.

The Red Shrimp gangjung is not quite as hot as the Fire Chicken, but it still has notable red chile spice. The biggest difference is not the heat level, but rather its gochujang base that gives the dish a wonderfully funky backbeat. Equally impressive is the Teri Chicken gangjung, a riff on the teriyaki chicken that Min cooked at Blue Sea, but much lighter and with more of a garlicky ginger flavor. Normally this is not a dish that would jump out at me, because of the associations with bottled grocery store teriyaki sauce; I'm glad I took the chance. 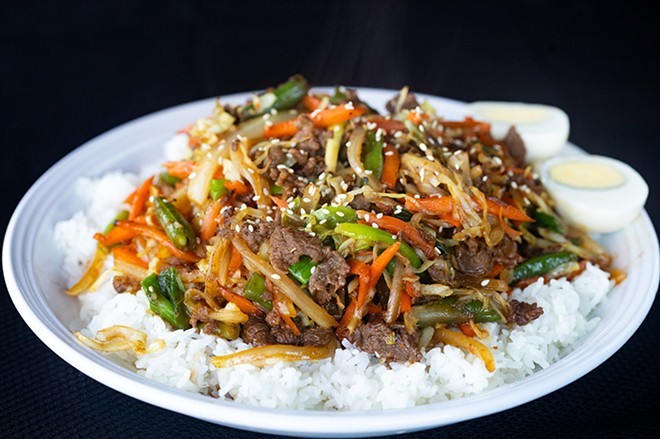 Min's version of bulgolgi beef is also quite divergent from my past experiences of the dish. More like a cross between the Korean-style sweet soy marinade and Mongolian beef than what you'd find at a Korean barbecue restaurant, the dish is chock-full of onions, carrots and green beans, all wrapped up in a delicate ginger-perfumed soy sauce. It's also the best value of the menu; the portion is so large, it could easily feed four people — though it's so wonderful you'll have a hard time sharing.

Fire Chicken's ramen also breaks with tradition. The vegetable-based broth is hearty and slicked with oil, giving the entire dish an intense, soy-flavored richness more akin to a stew than a soup. It's different than any other ramen around, and once you wrap your head around that, it's utterly delicious. The mild chicken, brimming with zucchini, onions, carrots and cabbage, is the sort of hearty soup that you dream of on a cold, dreary day. The veggie version, requested at a medium spice level, makes the mouth tingle with warm red chile heat.

The Baiks offer a handful of appetizers, including a shrimp tempura with a batter that tastes like butter, as well as mandu, a Korean pan-fried dumpling filled with pork and veggies. Of course, the pair wouldn't be satisfied with just having simple mandu on their menu, but instead enlisted the help of Michelle's sister to come up with a "Popcorn" version of the dish. Here, the dumplings are sliced in half and covered with melted cheese and spicy mayonnaise. The result is a delicious concoction that reads like dumpling nachos.

Michelle says there is nothing like the Popcorn Mandu in Korea — or really, any of the dishes they've created for Fire Chicken. However, the fact that she and Min are able to play around with different dishes, while also giving St. Louis a taste of their Korean heritage, is their way of showing the city who they are beyond the confines of what is expected. To experience such a delicious exploration is not only fortunate — it's enough to bring a tear to your eye.