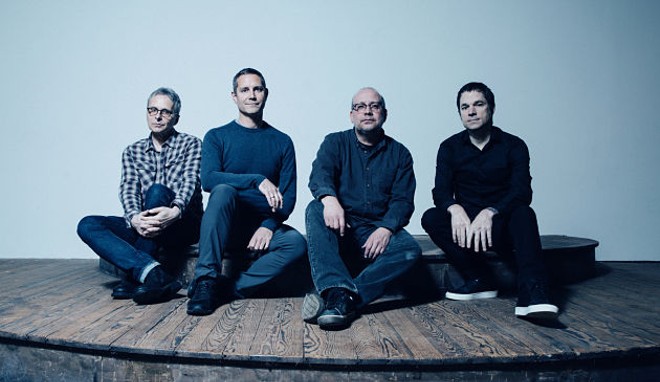 There's a fair chance that Joe Thebeau has been playing his brand of nervy, power-pop-inflected rock & roll longer than you've been alive. As the lead singer and guitarist of the Finns, Thebeau led that band to the upper echelons of local and regional success, marrying some Cheap Trick grandeur with more of-the-moment excursions into experimentation and dissonance.

"I was eighteen or nineteen years old when I started playing, and started writing songs at nineteen and twenty. To me, that was always the appeal — 'Hey, we could do our own instead,'" says Thebeau, who will turn 51 this year. "When you're eighteen and nineteen years old in cover bands, you're gonna be doing the KSHE cover list, and that's only fun for a little while. Then you start wanting to carry a notebook around."

After the Finns disbanded in the mid-1990s, Thebeau used the similarly named Finn's Motel as his creative outlet. His last release was the 2006 album Escape Velocity, and while Thebeau has played alongside other bands and artists, Finn's Motel has been mostly relegated to his home studio in Affton, Missouri.

Eleven years after its last record, however, Finn's Motel is set to re-enter the atmosphere in a big way; its new LP Jupiter Rex has a release show this week, and Thebeau has another full-length and an EP of material he hopes to release in 2017. It's a serious case of feast or famine for one of St. Louis' most gifted and devoted disciples of curious and exploratory rock & roll.

Thebeau estimates that, if things go as planned, Finn's Motel will release more than 30 songs this year. In apportioning them for individual releases, he began sorting these songs — some of which are more than ten years old — into thematic groups. For Jupiter Rex, Thebeau looked to the history of air travel and Greek mythology for inspiration.

"In the earliest days of airline travel, if you crossed the equator you were given a special certificate signed by the pilot and by the crew to say that you had entered into the realm of Jupiter Rex, which meant that you were in a special club for having crossed that line," he says. "Not a lot of people had done it." The album's cover art borrows an old PanAm certificate, harkening back to a time when continental travel felt like a lordly enterprise. And while Thebeau has long been fascinated with movement and travel, the album's thrust has more to do with boundaries that are less clearly defined.

"A lot of the lyrical themes are about crossing lines, and they're not always lines that are just geographic lines — temptation within relationships, things you're not supposed to do," Thebeau says. "One of the tunes, 'Icing the Equator,' I stole that from an alternate title that Henry Miller had for Tropic of Cancer, which is also about crossing a geographical latitude line. It all sort of swarms together — you start toying around with words and certain language, and you almost build a certain lexicon."

From the first rumble of opening track "Grounded," it's clear that neither the band nor its members have settled into middle-aged boredom. Galloping bongos and fuzz-bombed bass attend quick and crunchy guitar bursts. A number of these songs get in and out with a Guided By Voices-esque quickness; Robert Pollard himself should be jealous he didn't coin the title to "Drinking Wine at Beer Speed," one of the album's punchiest moments. But perhaps in keeping with a reflective songwriter given to big-picture musings — Thebeau received his degree in philosophy a few years ago — the most striking moments on the album are the quietest and most ruminative.

Thebeau notes that he turned 40 when Escape Velocity was released and 50 when he wrapped this new album; when asked how he views the breadth of a 30-year career in songwriting, he simultaneously demurs while defending the primacy of his current output.

"I tend to only think about it when people bug me about it; people that used to come see us play, occasionally I'll get messages about it, saying, 'So, when are you doing another [Finns] reunion thing?' And I think, geez, I don't need a reunion thing; I've got this thing! It's coming out in May!

"I don't feel like I write all that differently than I did before," Thebeau continues. "Early on, I would focus in on a certain musical style a lot harder. The first Finns record was supposed to be a power-pop type of thing, and the second one we lost our minds on U2 and R.E.M., and the third one was back to being a Cheap Trick-inspired thing. All those overly tight focuses, none of that worked in the commercial world — after that, I decided I wasn't gonna worry about it anymore. On Jupiter Rex, there is every different type of whatever thing flies through my ear. I indulge every single muse."