This story was produced in partnership with the Pulitzer Center. For more stories about the effect of COVID-19 on museums, please visit the Prairie State Museums Project at PrairieStateMuseumsProject.org.

Katherine Dunham, a world-renowned dancer and choreographer, had big plans for East St. Louis in 1977.

Leverne Backstrom, president of the board of the Katherine Dunham Centers for Arts and Humanities, still does.

But Dunham, who was Black and a pioneer in dance anthropology, had hoped to spur a "cultural awakening on the East Side," she told the St. Louis Post-Dispatch in 1978, by bringing the art and dance forms she collected from around the world to the area.

Instead, Dunham, who died in 2006, and the people who have tried to carry on her legacy have had to shimmy around problems related to the systemic poverty that exists in the predominantly Black city just east of the Mississippi River.

And just when a piece of good news showed up earlier this year — the promise of a $250,000 grant from the state of Illinois — some bad news crept in right behind it.

In March, problems poured on the organization's headquarters, which are located in an old mansion at 1005 Pennsylvania Ave. in a largely desolate area. When board members showed up for their monthly meeting on March 9, they discovered flooding in the museum's music room, which contains instruments such as drums as well as a balafon and a kor, a type of xylophone and string instrument played in West Africa.

The museum's leaders thought they had identified and fixed the source of the water — then it flooded again two weeks later. Repairing that damage will eat up at least some of the state money, which they had planned to use for projects like fixing the underground lighting in the African village outdoors.

"Praise God, we didn't lose any artifacts," says Backstrom, a retired teacher who lives within walking distance of the museum.

Around the same time as all this, Illinois Gov. J. B. Pritzker also issued a shelter-in-place order in response to the spread of the coronavirus, which meant the Dunham Centers could no longer offer tours, dance workshops and other programming.

In spite of the cascade of problems, Backstrom remains committed to Dunham's vision for East St. Louis because of her promise to a previous board president, Lena Weathers, who died in 2017.

"When I gave my word to Dr. Weathers that I would come on board and serve as a board member and help to maintain the Dunham legacy, not only in East St. Louis but in the world, it's kind of like, your word is your bond," Backstrom says. 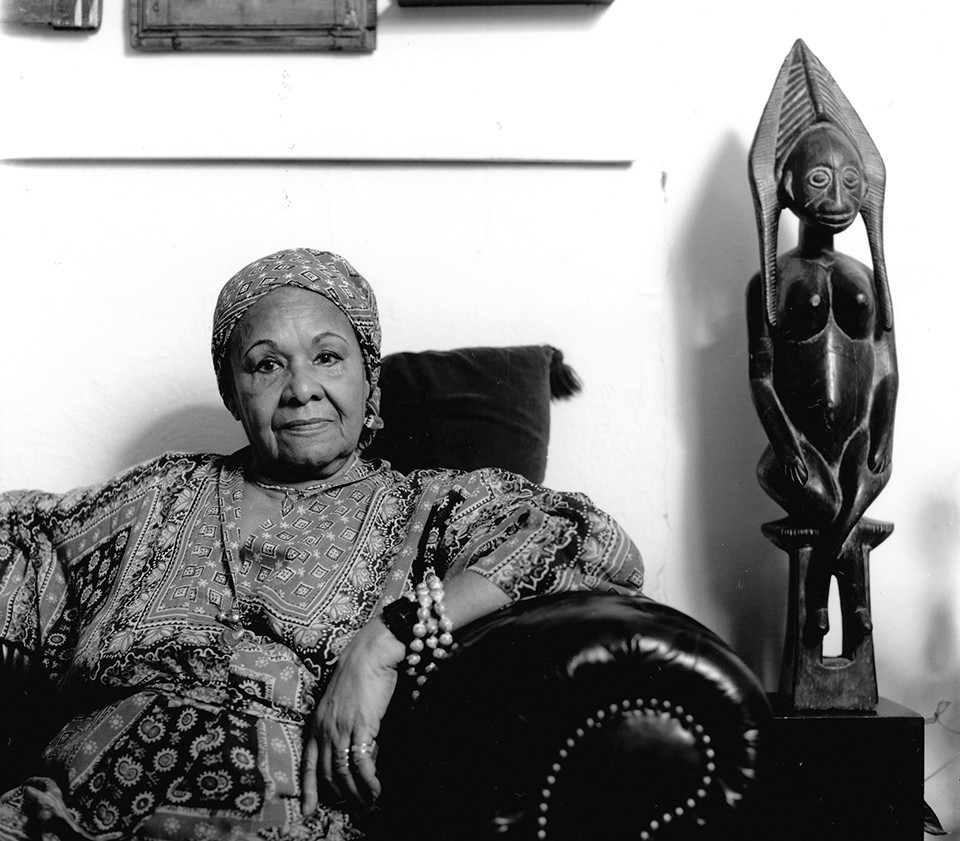 Dunham is best known for bringing dances from various Black traditions to a wider audience on stages in America and around the world. In the 1930s, she founded the country's first self-supporting Black modern-dance troupe and led it to more than 50 countries on six continents, according to the New York Times. She pioneered what is now known as the Dunham Technique, which combines Caribbean dance, ballet, African rituals and African American rhythms.

She was also a widely respected anthropologist and one of the first African American women to attend the University of Chicago, where she earned bachelor's of philosophy in social anthropology.

And she was a political activist who spoke out against racism and tried to use the arts to alleviate poverty. In 1969, the Federal Bureau of Investigation published a bogus newspaper containing sex smears again civil rights leaders, including Dunham, who the agency considered an "effective black leader," the St. Louis Post-Dispatch reported.

Today, the museum that is part of honoring her legacy sits across from a vacant grass lot containing a small sign alerting visitors that it was the home of Malbern Stephens, a former East St. Louis mayor and "a decent man who fought corruption," the sign says. After the 1917 East St. Louis race war, when white people, during a labor dispute, rampaged through the city killing at least 39 or — according to some estimates — more than 100 Black people, Stephens oversaw reparations to victims.

Dunham, who was from a Chicago suburb, developed a love for the Metro East in the 1960s, when she was invited to serve as an artist-in-residence at Southern Illinois University Carbondale. In 1975, she purchased a group of neighboring houses in East St. Louis from the university for use as a personal residence, an office, and a residence for students, instructors and visitors, according to the Dunham Centers.

One of the homes — the museum damaged by the flooding — now contains over 250 African and Caribbean art objects from more than 50 countries.

But that wealth of cultural heritage stands in contrast to some of the Dunham Centers' struggles over the years. At one point, the centers owed back taxes to St. Clair County, which auctioned off the three other properties, Backstrom says. The financial issues stem in part from a $50,000 loan taken out by Dunham's assistant in which she listed one of Dunham's houses as collateral. The assistant died in 2005, the loan went unpaid, and the organization was unable to find the money to keep the three buildings. Thieves also stole copper wiring from the other properties, which are now vacant and deteriorating.