Inside a small studio space on Cherokee Street, design mogul and St. Louis native Brandin Vaughn has set up shop. It's here that Vaughn pushes the creative boundaries of fashion through unique, handcrafted wears. His shop, Brandin Vaughn Collection (2604 Cherokee Street), stocks garment after garment of functional and fun styles.

Vaughn's love for design was sparked at an early age. In an attempt to keep up with the expensive fashion trends sported by his fellow classmates, Vaughn eventually said to himself, "Why not just make these styles myself?" He began frequenting local thrift stores, picking up a knack for sewing and repurposing recycled clothes into unique new looks.

"I'd take a sleeve off a shirt, sew it onto another shirt, and create a whole new style — that's what really sparked my interest," Vaughn says. Fast-forward to today, and Vaughn has grown his self-taught design skills into a full-fledged fashion enterprise. He describes his store as a "fashion test lab" where he works alongside his customers to create stylish and out-of-the-box garments that are still highly wearable.

Vaughn notes that his fashion career didn't begin until he was in his mid-twenties. After a brief music career that eventually fizzled out, he found himself returning to his passion for design, aiming to up his patterning and sewing skills into a new career path. After enrolling in art school in Chicago, Vaughn's talent and energy were quickly recognized; one of his first industry jobs was working for none other than Beyoncé at the Macy's Glamorama show during his junior year of college.

"I was called out of class — they told me they had a job for me at the Chicago Theatre," Vaughn says. "I ended up in a green room with Beyoncé, her mom and sister. It really blew my mind."

Vaughn's big break was the jolt he needed to pursue fashion full-time and in full force. "I realized that clearly, if Beyoncé wants to work with me, then this job is going to take me to places I could never imagine going," he says with a laugh. 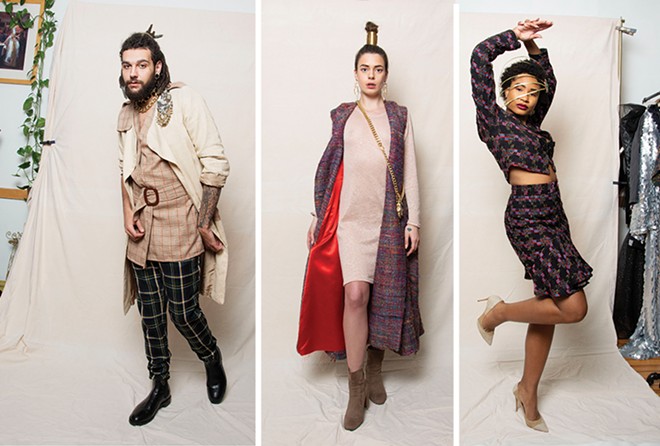 After spending almost ten years in Chicago as an assistant designer at a small boutique, Vaughn decided it was finally time to branch out and create his own brand. Operating under a model similar to his previous gig, he opened his own space — his first boutique was located in the Delmar Loop, where he was able to build up a robust clientele.

At his relocated shop on Cherokee Street, Vaughn is constantly perfecting his products through collaboration and discussion with his customers. Vaughn often designs an item, displays it in the shop and then makes alterations based on customer feedback.

"Often I design clothes that I don't personally wear — for example, I do a lot of women's fashion," Vaughn says. "So I'll put something on the racks, and then my customers will try it on and tell me how to make the product better or more functional. 'Drop an arm hole, add a pocket,' etc. That feedback is what really helps me finalize my designs and come up with a product that I know is going to work."

At his shop, Vaughn takes customers back to the original concept of ready to wear. Clients can come in and shop off the rack, yet still have the ability to tailor and customize products to their taste or needs.

In September, he debuted "100 Looks" at the downtown Marquee Restaurant and Lounge, a show that celebrated his designing of more than a thousand clothing items throughout his career. In 2020, Vaughn has big plans to expand his brand past the St. Louis area, including sharing "100 Looks" with audiences in Atlanta, Chicago and Los Angeles. By showcasing his brand and work across the country, Vaughn hopes to collaborate with manufacturers to get his products out of his store and into boutiques in new cities.

Vaughn also hopes that by allowing others to produce larger quantities of his more popular products, his time will be freed up to devote himself entirely to the creative design process — so there will never be a shortage of fresh new fashions on the racks at his Cherokee Street shop. Vaughn regularly collaborates with local models, artists and photographers in his work, and in the coming year, he's hoping to partner with even more creatives and make his fashions even more accessible to shoppers here and beyond.

"It takes many hands and talented people to produce something beautiful," Vaughn says. The future for me is unity, working together in collaboration."