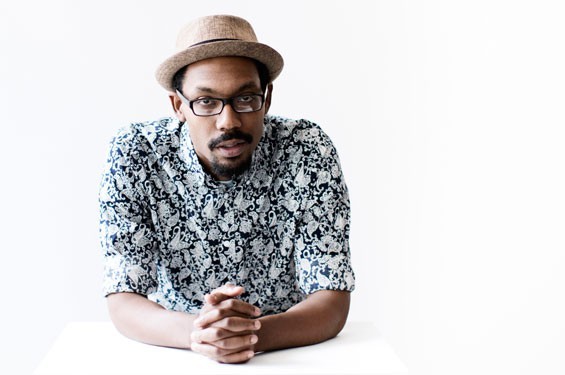 In voodoo culture, a "loa" is an intermediary spiritual being — a kind of go-between for humans and the principal deity. Much like the Catholic conception of a saint, a loa is often human in form but has more than a touch of the divine.

For Damon Davis, an artist, musician and filmmaker raised in East St. Louis and reared in the Catholic church, his fascination with voodoo comes from his mother's heritage. "My mama is Creole, she's from Louisiana. I wanted to study where that culture comes from."

That collision of cultures and faiths animates his latest release, the brief but sprawling LOA: Act 1, a four-song EP that serves as the initial entry in a planned trilogy. The story of LOA is hard to summarize — more on that in a minute — and the music follows suit, as Davis and his collaborators use spacey hip-hop beats, florid strings and pitch-shifted vocals to tell a story at once cosmic and human.

Founder of the Farfetched collective, Davis has certainly put forth his fair share of music — as one-half of the hip-hop duo Scripts 'N Screwz, as a performer with the live rhythm-and-rap band Blank Generation, and as a ready collaborator on many Farfetched productions. For this project, though, Davis decided to plant his flag.

"It's my first musical release under my own name," says Davis. "My subject matter is a lot more adult; the shit I gotta deal with is more real." That simple act is a bold choice, but for Davis it is merely the clearest way to communicate his message. "I don't want people to get confused about who's saying what and what they're saying," he says.

The listener may only pick up broad strokes of what Davis is saying across these four songs; as a stand-alone EP, Act 1 can only hope to set the stage for what is to come. If it feels a bit premature to write about one third of what will eventually become an album, Davis' work — always collaborative, border-crossing and holistically political — is consistently engaging and challenging. The story behind LOA is knotty by design, but Davis gamely describes his vision in our conversation, referencing David Mitchell's novel Cloud Atlas as similar in scope and construction.

Sure enough, race is a major preoccupation in these songs, as it is with much of Davis' recent work across disciplines. The EP opens with "The Vessel (Siren's Song)," as Davis takes the point of view of a captive shackled within a slave ship. Sunyatta McDermott of CaveofswordS takes the role of a narrator, outlining the story's broad trajectory. Later in the EP, Loren D, Ciej and 18andCounting contribute as well, at times making Davis appear like a tertiary player on his quasi-debut. That's by design; Davis says he approached LOA more as a film director or fiction writer than a performer. Rather than address the local and national conversation of race head on, this project takes an approach based in science fiction. For Davis, that decision is informed by fiction's ability "to get people awake on a subconscious level," he says. Moreover, sci-fi allows Davis to create a more representational, and ultimately more hopeful, space for people of color.

"Black people do not get the opportunity to indulge in the future; the writers of sci-fi don't seem to think that we'll make it there," says Davis. "I think it's important for creatives to take back that idea of the future. You can make up your own world or country or city and live outside of this system that has been destroying you from day one."

Davis aligns this project under his ongoing interest with Afrofuturism — "reimagining the past and wondering what is to be," as Davis explains it. He says, "Let's come up with a whole new beginning."

"I concentrate more on alternative blackness," Davis says of the aesthetic and its potential impact on young listeners. "You don't have to worry about your morale and fighting for basic necessities. If you can take them out of today and that tomorrow can actually be better, that will get them through today. I think that's a serious and dire thing."

Much of Davis' art is rooted in the here and now — look for Whose Streets, his post-Ferguson documentary made with Sabaah Folayan, to be released later this summer — but LOA, at least in its initial installment, tells a story on an epic scale.

"Artists and scientists are the only two types of people who can see something in their heads and make it happen," says Davis. "You have to be able to believe in yourself and the idea that you make it a reality. Those are the vanguards of the species; they push the species forward. That's the job of the artist."

Stream the EP in full below: