Fantastic St. Louis Junk Foods ... and When to Eat Them

If junk food was really junk, it wouldn't taste so good. If we were never meant to eat chips, deep-fried potatoes wouldn't fold so splendidly into pockets of salt and ridges and crunching satisfaction. Ice cream wouldn't be so wonderfully cold ... and soda wouldn't bubble. While we'd never advocate excess for excess' sake, few people on Earth can forever resist the call of their particular junk-food weakness. At some point, we all reach that hour of need. And what better time than summer in St. Louis? Certainly, after a bitter winter and fickle, late-breaking spring, a St. Louis summer deserves some St. Louis-made junk food. Lazy nights on the front stoop call for something to munch on — and after those 3 a.m. summer nights, what tastes better than something unhealthy?

Now, you might wonder: Is there a best St. Louis junk food? Let us not fight about rankings, just this once. Let each soul search for that answer. In the end, there's little to be gained in pitting one collection of empty calories against another. You don't need a food critic to tell you what pizza you like the most.

The question before us today is when. When will that moment hit you this summer? We've come up with a list of strong possibilities.

1. When your sandwich is boring:
Old Vienna Red Hot Riplets
The chip lover's chip, Red Hot Riplets punishes the soft palates of its devotees with searing spice even while rewarding them with tangy, barbecue-flavored bliss. However, these smoking-hot St. Louis-made snacks are more than a standalone food. They're also salvation for bland sandwiches. Take that sub or even that leftover turkey club in the fridge and add a layer of these mouth-burners; you might realize that you've been ruined for all other sandwiches, forever. There's a reason Old Vienna started selling straight-up seasoning. Even so, there's no replacing the tactile joy of crunching through a layer of smashed-up chips on the way to sandwich heaven.

2. When you want a child-like sugar rush:
Vess Soda
Regardless of which Vess soda flavor is your fave — is it Whistle Orange? It's Whistle Orange, isn't it? — they're all made of near-radioactive combinations of artificial flavorings and weapons-grade sugar. But for the last 100 years, the twenty or so sodas in the Vess stable have brought joy to generations, and the fact that these iconic cans and bottles still fill the shelves of St. Louis gas stations and corner stores is a minor miracle. Vess is just Vess; it's not a shoddy copy of Coke or your run-of-the-mill generic supermarket fizz. Whether that's nostalgia or fairy dust, it just works. And for the 21-and-up crowd, Vess' hyper-sweet composition makes it a great friend to vodka.

3. When you're feeling peak St. Louis:
Imo's Pizza
Travelers to St. Louis may wonder why pieces of the town's signature pizza have two sides too many, why its surface appears to exist in a realm in which the laws of physics don't apply, or how such a thin crust supports the half-sunken cheese ooze that is Provel. These are legitimate questions. With Imo's, however, those questions fly out the window on a wind of freshly made pizza brilliance that defies modern science. In St. Louis, Imo's controversial nature makes it both junk food and delicacy, a puzzle box that when unlocked reveals the soul of this weird city. At times, it seems like the best food you've ever tasted; in others, it's a crime against the very concept of food. It is pizza mimicking life, and eating it is a privilege every St. Louisan, native or transplant, deserves to experience.

4. When you want to eat an entire cake:
Gooey butter cake
Just walking into south city's Gooey Louie involves a blast of sugary atmosphere to the face. The sensation is even sharper when you open the box to the eight-by-eight square of half-inch-tall perfection that is its signature gooey butter cake. Therein lies that sweet temptation: Sure, it's technically a cake, and ethically one should feel compelled to share it with a friend, a coworker or even mom — "NO," declares an inner voice as you cut into its soft yellow dough. "ALL FOR ME." If you can manage to drive home without devouring the entire thing, you're a champion of willpower. If the cake lasts for more than 24 hours, it's surely proof that you're dead. 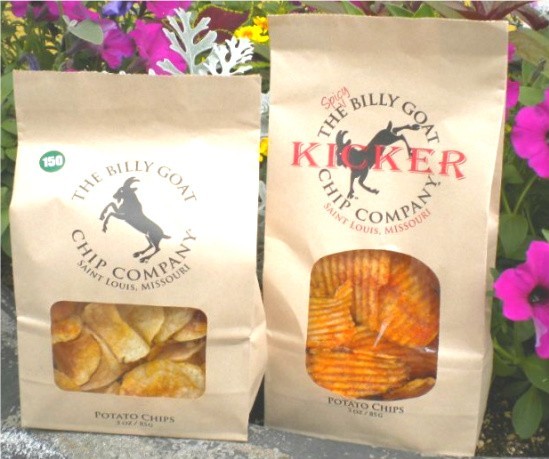 5. When you just want really, really good chips:
Billy Goat chips
While brown paper bags are generally best-used for hiding your 40, the same packaging capably contains some of the best chips your mouth will ever taste. A local success story, Billy Goat Chip Company's claims of "artisan quality" and "hand selected" ingredients are justified the moment you open one of its one-ounce sacks — the hand-cut potatoes that go into making these chips really are that good. And they're so effortlessly crunchy and substantial that you won't even be tempted to tilt that bag into your maw. You'll want to savor these babies chip by chip. Thankfully, Billy Goat chips have found their way into dozens of local bars, stores and restaurants. Check the company's website for an updated list, and raise the quality of your chip-snacking, pronto.

6. When the air turns to soup:
Ted Drewes Frozen Custard
St. Louis doesn't know what to do with winter and spring, but it sure as hell knows summer. It's hellish, with a humidity that would make the poisoned planet Venus retch, an atmosphere that delivers moisture to body regions best kept dry. And when those days hit, take refuge in the Arctic climes inside a Ted Drewes concrete swirled with a dizzying array of ingredients. The classic St. Louis-made frozen custard regularly attracts deep crowds to its two local locations, and while the hordes are worth braving, the proliferation of eight-ounce containers of Grandpa Ted's most popular flavors at local restaurants and even the airport is a welcome alternative. With the world only getting hotter, St. Louis' best-loved ice cream will only be that much more vital.

7. When you want to time-travel:
Crown Candy Kitchen malt
Although it could be argued that Crown Candy Kitchen is most famous for its fourteen-freakin'-pieces-of-bacon BLT, no just judge can overlook its malts and milkshakes. With just the right amount of frosty chill, the malts deliver flavor without overload or brain freeze. Even the base vanilla option delivers an astonishing, elemental satisfaction; it's as if you've opened a dictionary of tastes only to find a picture of the very malt in your hands. 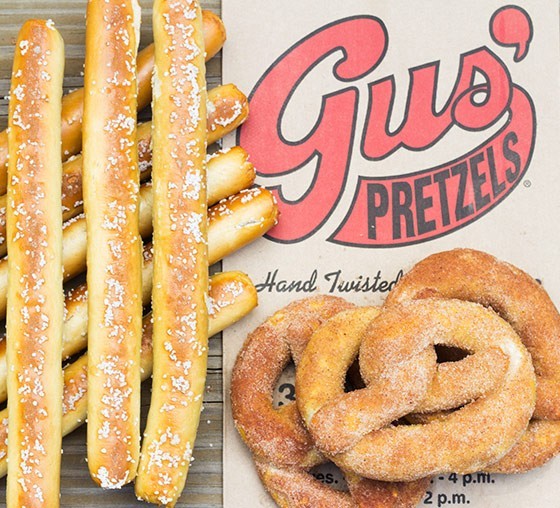 8. When you need walking-around snacks:
Gus' Pretzels
Being on the go is immeasurably improved by portable food. Granted, not all foods work; a bowl of spaghetti would likely result in disaster. The offerings at Gus' Pretzels, on the other hand, are the perfect solution for any mobile outing. The classic pretzels are baked daily in the same family-owned shop that opened in 1920, and they fulfill every requirement for mobile-eating success: Even stuffed with bratwurst or hotdogs, the pretzels are blessedly free of grease or wayward mustard, and they provide dense and salty nourishment. Of course, if you like a mess on your hands, the cinnamon-sugar and garlic-butter options will leave you with finger-licking mementos of your delicious encounter.

9. When you're craving munchies:
Dad's Cookies
An oatmeal cookie is a difficult thing to get right. Too soft, and you're basically eating oatmeal; too hard, and you might as well try biting a river rock. The only remaining outlet of what was once a national chain, Dad's Cookie Company is a south-city institution that makes it seem easy. That's because Dad's Original Scotch Oatmeal Cookie is, to put it lightly, the perfect cookie. Unadorned by raisins, it's sized conveniently for popping into your mouth, but also holds up to light nibbling without leaving you covered in crumbs. Pro tip: 1. Smuggle bags of both Dad's oatmeal and double chocolate-chip flavors into a movie theater. 2. Alternate between them. 3. Ascend to cookie nirvana.

10. When you want to share a straw:
Fitz's Root Beer Float
Taking your relationship to the next level could involve something serious, like color-coordinating wedding flowers with baby-shower napkins, or something more fundamental, like figuring out whether you can share a mountain of ice cream slowly melting atop of stein full of root beer without sucking it down all by yourself. Leave the serious stuff for another time, and head to the Loop's resident root-beer temple. The menu contains dozens of float options, although you can't go wrong with a classic root beer. Unlike, say, uniting in holy matrimony, you won't be risking your future happiness (or that of another soul) by saying "I do" to Fitz's. The worst that happens is that you wind up sticky, or ordering another float. Win win.

11. When you need to chew the fat:
Switzer's Licorice
Licorice has the curious attribute of being a candy that cannot be devoured in a moment — and if you try, have fun unsticking the sugary glob from the top of your mouth and rear teeth. You'd be wise to instead take a minute to savor it, and give one to a friend or whatever kids are in your life. And while Twizzlers may own the supermarket aisles, in St. Louis, Switzer's is king: The candy's founder was peddling the stuff by cart in 1888. These days, thanks to a recent revival, the chewy candies can be found at Straub's and most Cracker Barrels. The licorice twists and bites are shipped out fresh so they burst with flavor. Peel off a twist and chew it contemplatively. 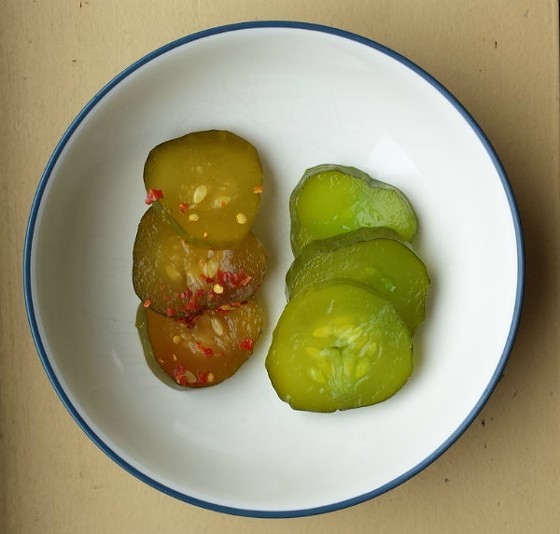 12. When you want to expand your junk-food horizons:
Pimped Out Pickles
With a bold name that plays on the cult TV show Pimp My Ride, Pimped Out Pickles made an immediate impression upon opening in 2014 with a 50-strong menu selection that's as comprehensive as it is eclectic. On that menu, you've got options like piña colada pickles, the popular "Sweet-n-Spicy," and fruit-flavored pickles including strawberry, pineapple and black cherry — but, like the ocean, the deeper you go, the stranger and more fantastic the discoveries become. There's "Pimpjuice" and "Flava-Flav," peppermint and "Volcano" pickles and even a host of Jolly Rancher-flavored pickles, if that's your thing. Just keep in mind the brick-and-mortar store at 2801 North Kingshighway is only open Saturday, although you can still get your pickle fix at various corner markets and gas stations across the St. Louis region. Check out the shop's Facebook page for an updated list and get your pickle on!