Alu Sun has a complicated relationship with the (allegedly) forthcoming Costco development that is getting ready to dramatically alter the northwest corner of University City.

On the one hand, it pushed him and his business partner, Clavin Koong, to find a new location for their wildly popular Taiwanese restaurant, Tai Ke. The prospect of eventual demolition was simply too great a specter hanging over the business, so rather than wait for the official word, they felt that they had to be proactive in their search for a new location.

However, the move was a long time coming. Almost immediately after they opened the doors to the original Tai Ke in 2015, Koong and Sun felt that they just weren't in the right space. Not only was the dining room too small to accommodate the throngs of customers who packed in for its outstanding Taiwanese street food, the building also lacked an ample parking lot and was located behind another business, making it difficult to find from the road. Rather than lamenting the fact that they were likely being pushed out of their home, the pair chose to see the Costco situation as a fresh start.


And that new beginning was about more than just the building. For a while, Koong and Sun had been talking about doing shabu shabu at Tai Ke, even though their original space was not well set up to do so. The dish, an individualized way of doing Taiwanese hot pot, had become increasingly popular over the years throughout Asia, and Koong and Sun saw an opportunity to capture that momentum here in St. Louis. With that vision in mind, the partners set out to find a restaurant space that would allow them to do the Taiwanese street food they'd become known for alongside shabu shabu and other rotating specials. 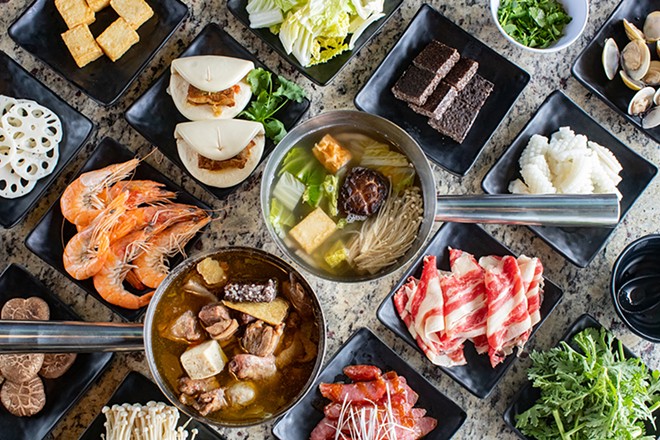 They found that perfect fit less than two miles west on Olive Boulevard at the former LuLu Asian Kitchen. After adding in a bar, complete with seventeen shabu shabu stations inlaid into the countertop, as well as a few aesthetic changes, Koong and Sun opened the doors to the new restaurant, Tai Ke Shabu Shabu, on January 1.

Fans of Tai Ke 1.0 will be pleased to know that the menu has been enhanced, not replaced. The restaurant's signature street snacks remain available and are as outstanding as they were at the original location. Gua bao are still the same fluffy, pork-belly-filled buns as before, overstuffed with shockingly luscious meat that could be spread with a knife. Pickled greens, ground peanuts and gently sweet braising glaze accent the pork, cutting through its silken fat. The Sticky Rice Hot Dog, perhaps the previous iteration's signature dish, remains as well; the garlicky sausage, cradled in sticky rice with sweet and sour dressing, is every bit as revelatory as it was at the old spot, as is the crispy chicken, which our server described as Tai Ke's version of KFC. I'd call it the most tender, black-peppery chicken nugget available in the bi-state area, if only I was able to stop stuffing my face with it to speak those words.

Hot wok entrees, like the restaurant's signature Three Cups Chicken, also bring the original location's magic to the new dining room. The dark-meat chicken remains warmly spiced and fall-off-the-bone, glazed in a garlicky rice wine, soy, sesame oil and chile sauce. Sizzling tenderloin beef is also an outstanding carryover. The slices of tender meat are glazed in a black-peppery soy concoction and accented with sweet bell peppers; had this not made it onto the new place's menu, there would have been a revolt. 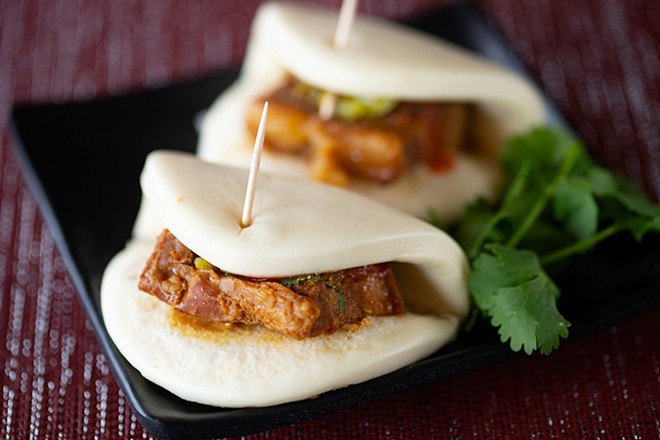 However, as wonderful as the original items are, the new offerings at Tai Ke Shabu Shabu are worthy additions. For the shabu shabu experience, we opted for the Combination version, a simmering pot of cabbage, hunks of corn on the cob, mushrooms, tofu and lotus root served in a broth that tastes like sweet buttered corn eaten at an oceanside café. A plate filled with clams, squid, whole shrimp and thinly shaved frozen beef is served alongside the pot; when the broth starts boiling, you place these additions into the mix alongside the already-cooking accompaniments. This forms a mouthwatering stew, flavored with seafood, vegetables and beef fat that is delicious on its own; however, when you add the accompanying sauce — a delightfully funky concoction that tastes like soybean paste, chiles and garlic — it turns the dish into an outrageous bomb of umami that you will not be able to get out of your mind until your next visit.

The showstopper of the new menu is a new special dish, steamed seabass. Your first clue that this is a must-order is when you look around the dining room and notice the steaming fish on every single table. As soon as it arrives at your own, you understand why. The gossamer-colored fish is the texture of butter; served on a platter over a heating element, the seabass continues to poach as you eat it, never overcooking but infusing the seafood cooking liquid with even more flavor by the minute. Fiery red chiles fleck the meat, and a generous garnish of leek-like greens crowns this beautiful dish. This should be in the conversation as one of the best seafood dishes in St. Louis.

Tai Ke Shabu Shabu's food is matched only by its hospitality. Servers are attentive even amidst the hustle and bustle of a busy dining room, but their attentiveness is dwarfed by a genuine warmth to share a piece of Taiwanese culture with their fellow St. Louisans. That such a beautiful thing came out of the prospect of a big-box store's steamrolling of several immigrant-owned businesses is at least some small form of poetic justice. 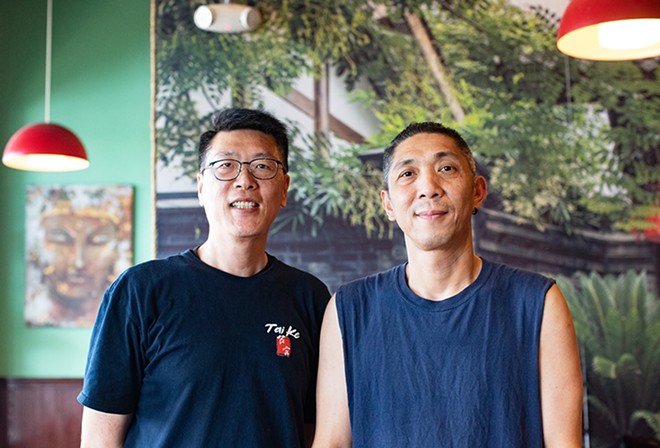