After your first bite of the tahdig at Esther's Persian Cafe, you may think you've been mistakenly given a hash brown and not the crispy Persian rice dish advertised on the menu. A golden-brown round cake the size of a dinner plate glistens with clarified butter, steam emanating from underneath like the sort of potato wonder you get at a high-end steakhouse. As you take your fork and dig into the crispy mound, however, it becomes apparent that the composition is rice, and not potato. Tender, flawlessly cooked basmati grains are encased in the buttery shell of crisped rice that has been caramelized on the bottom of a searing-hot, ghee-coated skillet. The butter saturates that outside layer, soaking down into the interior of the rice cake so that with every bite your tongue is coated in the richness.

Alone, this is a masterpiece. However, Esther's owner Reza Toghiyany smothers the tahdig in ghormeh sabzi, a traditional Persian stew made with beef, kidney beans and fresh herbs. Thick and hearty as pot roast, the stew only adds to the decadence, with just a whisper of lime finishing the dish, giving it a crucial punch of acid that balances out the richness of the butter and beef. It's utterly soulful.

After experiencing Toghiyany's tahdig, you understand why he's assembled a legion of fans over the years. A talented home cook, Toghiyany has always loved food, but he never pursued it professionally. Instead, he made his living as an automobile sales entrepreneur and cooked in his free time as a hobby, hosting dinner parties for family and friends.

However, these were no mere dinner parties. Toghiyany put together outright feasts for his guests, and as they grew in number, he had to start hosting his meals at parks to accommodate the ever-increasing crowds. In between the oohs and ahhs, he was frequently told that he should open a restaurant of his own so that even more people could experience his cooking. Eventually, he took that advice to heart. 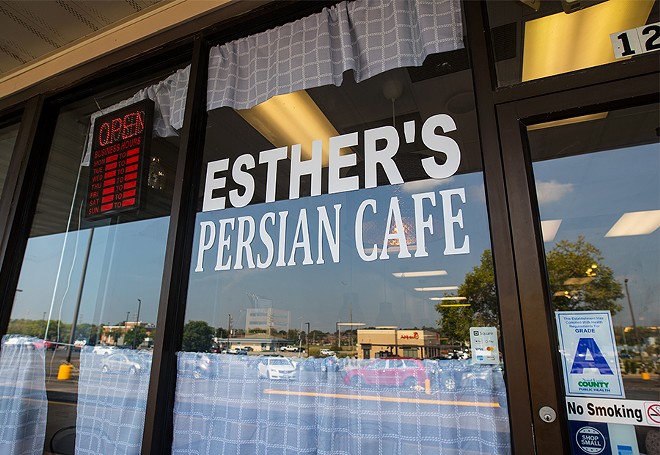 After searching for the right location, Toghiyany settled on a small storefront in Bridgeton, near St. Charles Rock Road and Interstate 270. Although a nondescript suburban storefront may seem like an odd spot for a Persian restaurant, Toghiyany and his daughter (the restaurant's namesake), Esther Spurgeon, felt that it was a unique opportunity to bring a different style of cuisine to an area teeming with chain restaurants. After a rehab of the space and some menu development, Toghiyany opened the doors to Esther's Persian Cafe in April.

Esther's is a sit-down restaurant, but the large, open kitchen setup makes it look like a diner, albeit a stylish one. An earth-tone granite counter runs almost the entire depth of the restaurant; underneath, it's painted French blue, an aesthetic that gives the feel of an updated home kitchen. Shiny metal bakers' racks filled with pots, pans and spices stand behind that counter, and approximately twelve simple laminate-topped tables and black leather chairs provide seating. The restaurant is sparsely appointed, but it's strikingly clean, giving it a glimmer that almost acts as decor in itself.

Toghiyany need not waste any energy on filling those walls with decoration, for nothing could compete with the artistry that comes out of his kitchen. As dazzling as the tahdig is, it's just one dish in a parade of wonders that make you understand the beauty of Persian cuisine. The kookoo sabzi, described as an herb frittata, is a stunningly rich, verdant concoction that has the flavor of an onion and dill quiche but with the texture of the little crumbles you get around the edges of a paper-thin flat-top burger. Inside, the egg mixture is suspended somewhere between fluffy and custard-like. It's magical. 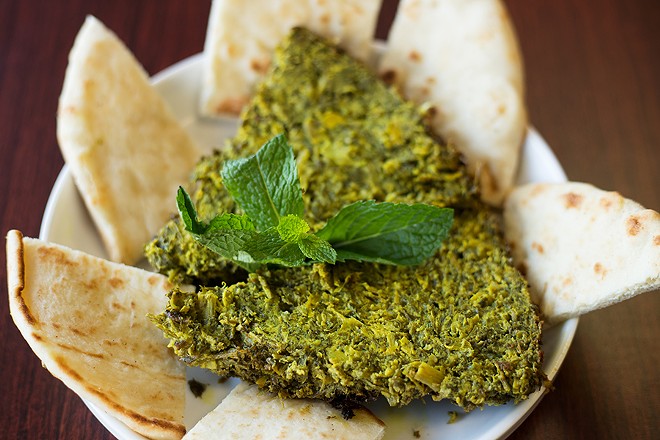 The kotlet, or Persian cutlet, has this similar crispy exterior. Inside, the beef and potato filling has the texture of a rustic pâté, its flavor deepened by the subtly sweet flavor of cooked onions. It's reminiscent of a flattened, griddled slice of meatloaf, yet one electrified with fresh herbs.

Toghiyany's chicken wings are surprisingly special. Though they present as simple wings and drummies, their yellow hue suggests a saffron marinade that gives them a gentle but present depth of flavor that is enhanced by bitter char from the grill. Even the hummus, a ubiquitous dish, is notable at Esther's. Here, it's smooth as silk and extra thick and nutty thanks to Toghiyany's liberal use of tahini. Served with grilled pita bread, it's a satisfying delight. 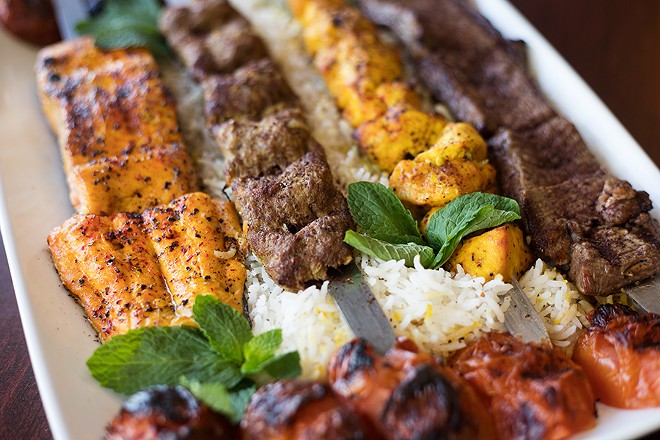 Esther's offers a handful of kabobs, including a tender, straightforward filet mignon kabob and a chicken kabob marinated in the same gentle spices as the chicken wings. Both are good, but the standout is the beef koobideh kabob, a mixture of lightly spiced beef that is coarsely ground so that it has a heartier texture than is typical of ground meat. The flavor and texture are similar to a Bosnian cevapi — black pepper kissed, enveloped in grill char and impossibly juicy.

The stews are also noteworthy. In addition to the ghormeh sabzi, Esther's serves gheymeh, a slow-cooked beef and split pea dish cooked in a cinnamon-accented tomato paste. The result is a Middle Eastern spiced version of barbecued pulled beef. Another specialty, the fesenjan, is a wonderful rendition of the traditional chicken and pomegranate stew. Slow-cooked in rich pomegranate molasses and accented with chopped walnuts, it's a complex mix of sweet and savory that underscores the beauty of this rich culinary tradition. 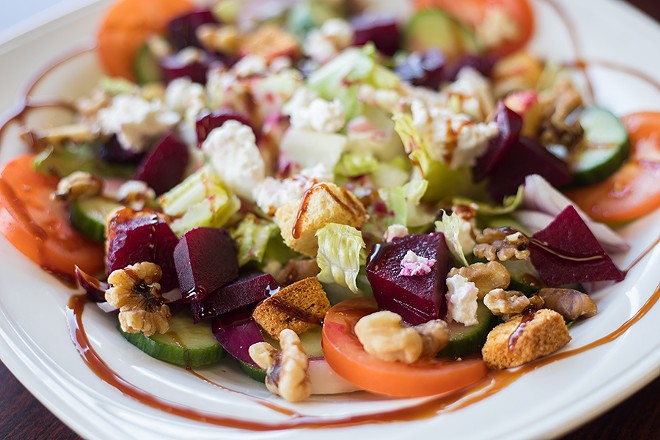 Esther's does not serve desserts. Instead, if he's not too busy working the grill, Toghiyany is likely to swing by your table with a cup of Turkish coffee and insist that you enjoy it as a leisurely end to your meal. As you sip the thick-as-mud brew, you can't help but notice the string of cars just across the parking lot that pack the Chick-Fil-A drive-through and feel sad for the motorists who are so close to greatness without realizing it. If only they knew that something like that tahdig was within a 40-second walk across the lot, surely, they'd exit the queue and make a beeline for Esther's. That butter-soaked basmati beats a waffle fry any day of the week.