Essay It Ain't So

Unreal uncovers the dark side of the drunk-dial, sips some warm beer (blargh), considers buying a (tiny) yacht and checks in on a design intern at the Post-Dispatch. 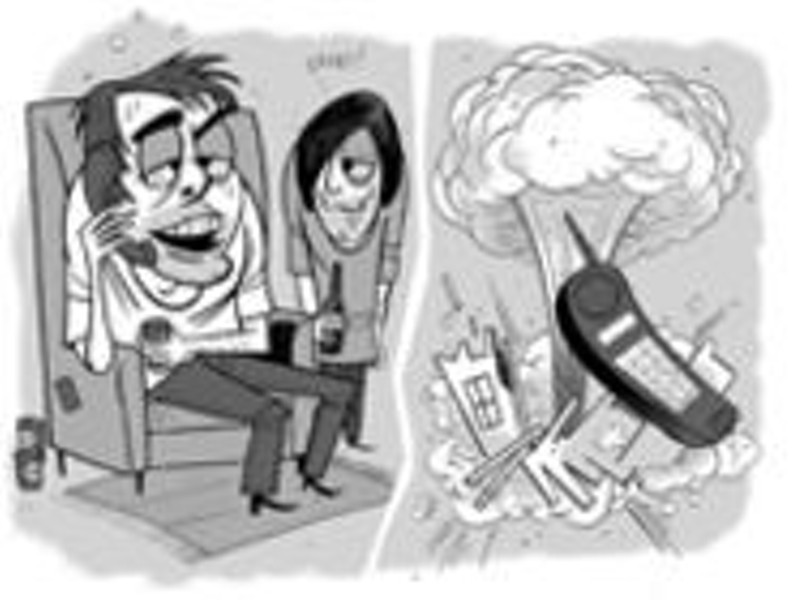 �How Practical Jokes Have Serious Consequences�

In 2003 two drunk young men at a party in Doe Run decided to make some prank phone calls. After a few minor successes, the duo dialed a girl they knew. It was about 3 a.m. When the answering machine picked up, they spewed a string of obscenities and threats.

Unfortunately for the fellas, the girl lived with her parents, and her father turned out to be Thomas L. Ray, a St. Francois County associate circuit judge. As press accounts would subsequently reveal, upon hearing the message the judge immediately contacted the police, who sleuthed their way to the party and arrested Gabriel Wichman and Ryan Fleming.

Two weeks ago Wichman and Fleming pleaded guilty to charges of minor harassment. As part of their sentence, Iron County Associate Circuit Judge Kelly Wayne Parker ordered each lad to perform community service, apologize to Judge Ray and write a paper titled "How Practical Jokes Have Serious Consequences." Fleming, who made the call, must submit a ten-page paper; Wichman, who supplied the judge's phone number, gets off easier — only eight pages.

There's a special place in Unreal's heart for drunk-dialers. But it's a big heart, and a small place. Eight double-spaced pages amounts to more than 2,000 words, for criminy's sake. As a compromise, we've crafted a boilerplate the boys can enlarge upon:

"How Practical Jokes Have Serious Consequences"

Practical jokes can have serious consequences. Some people might think such jokes are just fun and games, but the following examples suggest otherwise. Take the old "potato in the exhaust pipe" joke. Well, it could explode a car and catch a dude's hair on fire, or the potato could shoot out so fast that it hits somebody in the nuts. A firecracker tucked in a cigar could rip off your brother's nose and expose his skull. Feeding chocolate Ex-Lax to your best friend at a slumber party will most likely cause that person to get the runs, and scar him for life when the older kids start calling him Runs-DMC. A mouse shoved down a girl's pants could bite her coochie, make her infertile and therefore alter the course of history because this unborn baby could have turned out to be the second coming of Christ. All because of practical jokes, none even too funny.

Prank calling, also known as "drunk-dialing," is a particularly bad idea, it turns out. While seemingly harmless — no explosives, wedgies or sleeper holds are involved — a prank could very well disrupt a person's sleep, make him grumpy. Not confirming the prankee's occupation could result in serious consequences, too. Grumpiness could turn to anger if you leave a message that his daughter has a sweet, sweet ass and that you are riding over on a stallion to joust his dick off and decapitate him with a genuine Renaissance sword and capture his princess. That is likely to make him very angry and, yes, could have serious consequences. Very serious consequences indeed.

Warm beer, last we checked, has a very distinctive flavor.

It rhymes with "gee."

Poor eleven-year-old Kristen Bogert of House Springs could never have known that when she suggested a state law forbidding grocery and convenience stores from selling beer at temperatures cooler than 60 degrees.

As for the bill's sponsor, Kristen's hometown Republican state senator Bill Alter: Dude, why not introduce a law authorizing the sale of urine instead? After all, the stuff's pretty much sterile. Perfectly drinkable. Also packed with urea, which means it's loaded with nitrogen. Does wonders for compost!

Unreal can already imagine the lazy Sunday morning when our s.o. sends us to the corner market for the newspaper and piss for the garden:

We grab a copy of the Times and a chilly Schlafly for the slow walk back.

Then we take a long, warm leak on the pansies, the impatiens and the gardenias.

The s.o. will never know we spent the dough on the cold drink.

Pee performs at any temperature.

Somebody Buy My Crap

Unreal: So, where do you sail that bad boy? The Great Lakes? The Gulf of Mexico?

Dave: I wouldn't float it. I paid too much for it.

I bet. How much does it cost to gas up that sucker?

I suppose so. Maybe.

Why are you selling it? Are you diversifying your assets?

You could say that. I used to work at an antique store. I bought a bunch of these online. This is the only one I didn't sell.

Do you suggest wearing Top-Siders or flip-flops when yachting?

I'd go barefoot. If you're going to stand in a pond, you wouldn't want to wear any shoes.

Is Monaco still the place for the yacht-owning set?

I wouldn't begin to know.

Does your yacht have a clever name, perhaps a pun or double entendre such as Anchors A Sway or S.S. Seaman?

No. But if you buy it, you can name it whatever you want.

"The eternal optimist"
bondioli.blogspot.com
Author: Sara Bondioli
About the blogger: Sara is a 23-year-old St. Louis Post-Dispatch intern in the design department.

Today was my first day as a model! A hand model, that is. In my first day of working days (features) instead of nights (news), a photographer approached me saying he was looking for a "dainty" hand to use in a photo illustration (posed photo). So, my hand will be featured in a features section in the near future. It will be the one picking a red M&M out of a sea of blue M&M's. Have I piqued your curiosity? Good. Now you'll just have to read the paper to see it. My roommate says she's going to hang it up on our refrigerator, haha.

In church this morning we sang "Good Christian Friends, Rejoice." Does that song title sound funny to you? If so, it might be because the song is actually "Good Christian Men, Rejoice." Lucky for us (sarcasm), our hymnals are politically correct so it says "friends" instead of "men." I know it's changed to try to make women (like me) feel included. Well, it actually upsets me. There is no reason to change the lyrics. The song was written one way — keep it that way! If we write new songs and want to make them inclusive, fine. But everyone should realize and accept that for many, many years "men" was used to mean men and women. And in cases where it really meant just men, times have changed that definition.

Know of an Unreal-worthy local blog? Send the URL to unreal@riverfronttimes.com.