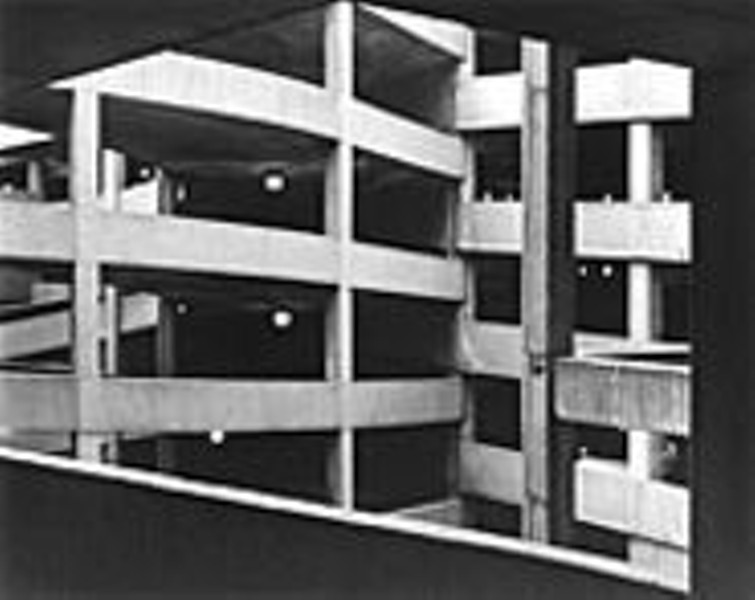 If someone told you they just saw a nifty exhibit of photographs taken from within empty parking garages, you might scoff, thinking that such an environment sounds about as boring as can be.

Photographer Richard Sprengeler, in pursuit of abstractionist gold, has put together a portfolio of what happens when one goes looking for an interesting interplay of forms and light in the most mundane of settings.

A modest selection of his Architectural Abstractions, as he has titled his show, goes up in the lower level of Left Bank Books this week.

Sprengeler says that he was photographing downtown's Wainwright Building from the fourth floor of a parking garage, and when he turned around he "saw all these lines and shapes and forms and circles that were inside the parking garage, and it intrigued me."

Returning to four garages to make a study of his find, he created a collection of stark, black-and-white works that takes the concrete spirals, slabs and lines of these buildings' interiors and turns them into a meditation on form, shape, texture and sometimes beauty. He says that these photos were also influenced by painters, including abstract expressionists such as Richard Diebenkorn and cubists.

Looking at most of Sprengeler's new photographs, if nobody told you what you were looking at, you probably wouldn't be able to guess. "I call them abstractions," the artist says, "because they're not necessarily photographs about the subject matter. I enjoy the fact that I can make a photograph and that the actual subject sometimes can't be identified."

The works in this show demonstrate what can be found when one takes time to stop and smell the parking garage, as it were. Somehow, the utilitarian concrete shapes of modern civilization at its most banal are transformed into something complex and lovely.