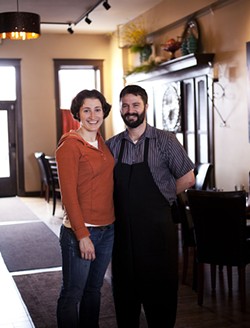 Ed Heath just wouldn't leave Jenny Cleveland alone. From the moment he spotted her on her first day of work at a Salt Lake City brewpub, he knew she was the one.

"I couldn't resist her," says Heath, now 34. "I was dating someone else at the time, but I remember seeing her on her first day and being like, 'Holy crap.' My relationship with my other girlfriend was in trouble and dwindling quickly. Then we broke up, and I began calling Jenny every day."

Cleveland, however, was not interested. "We were both going through nasty breakups, and he had been broken up longer than me, so I was like, 'Leave me alone,'" recalls Cleveland, who is also 34. "He had already gone through the hard parts and I was still going through the hard parts. I didn't know what I wanted to do and definitely wanted to be left alone. But then he kept calling me like four times a day and showing up at my house at 4 a.m. with bikes in the back of his truck asking me if I wanted to go for a bike ride."

Heath's persistence paid off, and he quickly found himself bonding with Cleveland over their shared lack of clarity on their career paths. Both were working day jobs that made them miserable and found their only solace during their shifts at the brewpub. They both realized that they wanted to make a career out of the restaurant business, but they didn't know exactly how.

One night, Heath had a revelation.

"He always gets mad when I tell this story," Cleveland laughs. "I don't remember exactly what he said, but in my head he said, 'If it wasn't for you I would...' And I was like, 'You would what? We shouldn't be holding each other back from what we want to do.' He said he'd want to go to culinary school, so I said, 'Let's do it.'"

The pair left Utah for culinary school in California, where they were in class together five days a week and consistently assigned to the same three-person working groups. "I think the instructors thought if we wanted to open a restaurant together we should know what we were getting into," offers Heath.

After school they settled into what they thought were their dream jobs and enjoyed the outdoorsy California lifestyle. Still, they knew they wanted more.

When Cleveland's sister called to tell her that the Edwardsville restaurant Fond had closed in her hometown, the two saw this as an opportunity to take the leap into owning their own place. Then just 31, they opened their restaurant Cleveland-Heath to critical raves – and the place has been packed ever since.

Though conventional wisdom suggests otherwise, Cleveland and Heath can't imagine not working together.

It's not always bliss, but they trust in the big picture.

"Everything is for the good of the restaurant," Heath explains. "We may be 180 degrees apart on how we get there, but the end goal is the same."

"I feel bad for the people who work for us," Cleveland laughs. "They see us fight every day. All of these things that you want to say to everyone else but you can't you say to the person you are comfortable letting your guard down with. All of this stress and frustration that should go to these other outlets falls on that person."

"In theory it should be a beautiful thing," adds Heath. "But it can get pretty nasty sometimes."

"Yeah, it gets pretty heated sometimes," says Cleveland. "But Ed has a great sense of humor and a huge heart."