Drive-By Truckers Are Grappling with America's Most Divisive Issues, From Ferguson to Trump

In the winter of 2014, Patterson Hood, co-founder of the alt-country/Southern rock band Drive-By Truckers, found himself in St. Louis during a solo tour and a show booked at the Sheldon Concert Hall. The venue is justly celebrated — for both its exceptional acoustics and rare appearances by legends of jazz, folk, gospel and country — but it doesn't often host searing reflections on the state of our American union.

At the time of his appearance, the Ferguson tragedy was still reverberating around the nation. When a St. Louis grand jury decided not to indict police officer Darren Wilson, who had killed the unarmed Michael Brown that August, the city exploded and protests once again took over the American streets. Hood was in the process of moving from his home in Athens, Georgia, to Portland, Oregon. He was not watching the events with equanimity. The songwriter set down to write "What It Means," perhaps his finest work in a twenty-year career of extraordinary songs about this brutal and beautiful country.

At the Sheldon Concert Hall, he closed his main set with his new composition. Here's how it begins:

He was running down the street

When they shot him in his tracks

About the only thing agreed upon

Is he ain't coming back

There won't be any trial

So the air it won't be cleared

Out of anger out of fear

Hood recalls that time and what it meant to perform the song — a furious and deeply felt rush of images and doubts — in a city where it more than hit close to home.

"People asked me, 'Are you going to play that song?' I thought, I've got to," he says during a call to his home in Portland. "If I'm not willing to play it here, then fuck me — I don't deserve to play it anywhere. But it was one of the warmest responses from an audience I've ever received. It was really moving and beautiful. It gave me hope. We've got to get past this shit as a society. Our issues with race have been a stain on our very existence."

"What It Means" was inspired by the events of Ferguson and the 2012 killing of Trayvon Martin, but like the greatest topical art, it resonates with questions and the meanings that circle around them, all so different for so many different communities. For Hood, one question led to another and another and to more questions still.

"I thought about putting a question mark on the title," he says. "Marvin Gaye's 'What's Going On' is a much greater song, but he also left the question mark off so it could go either way. Musically, mine is such a simple song. It almost has more of a parallel in hip-hop writing, rather than a rock song format. I can't rap. I wish I could. The other touchstone was a Tom T. Hall protest song about Nixon called 'The Watergate Blues.' Today, most of the music addressing these issues is in hip-hop and pop music. There aren't that many rock & roll songs talking about this stuff. I'm a white, middle-aged, Southern college drop-out, which is a big Trump demographic. But people who look like me should say, 'Black lives matter.'"

The title of Drive-By Truckers' latest album, American Band, isn't a question, but it implies one: Can rock & roll still shake, rattle and roar through our divided national zeitgeist? Though Hood now makes his home in the Northwest, it's not as if the band has left behind its Southern roots. One of Hood's most poignant songs reframes the "duality of the Southern thing," as he once put it: "No matter where we are we're ever South." But the album's radically stated themes — violence, hypocrisy, justice, race and our seemingly eternal obsession with guns — are no longer regional for this American band. They are the truths that demand a reckoning of us all.

The songs on American Band were mostly written quickly and recorded in less than a week. Hood and his foil Mike Cooley, the band's co-founder, wrote separately but synchronously. "When we started playing each other a little of what we had, it became clear we were on the same trajectory," he says. "I wrote 'What It Means' first. I wasn't sure it would be a Truckers song. It was something I wrote to get off my chest. I was also remembering something that happened in my hometown of Athens. It's a nice town, seems untroubled. But it happened there too. It happens everywhere." 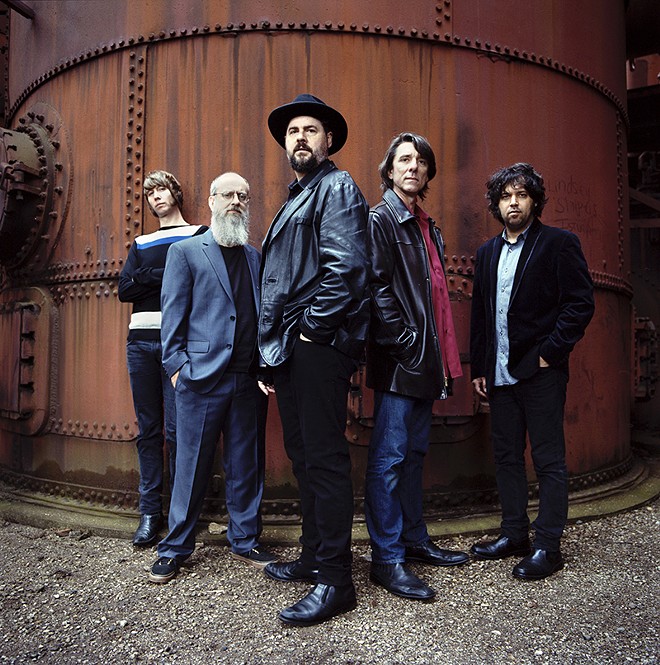 While the songs penned by Cooley are as scathing as black-flag-flying punk — images like "low-hanging, headline-grabbing ring masters and imaginary elephants" need no explication — Hood's recent songs are some of his most reflective, whether imagining the terror of the mass shooting in Umpqua, Oregon, or the burdens of our political, racial and class divisions.

"There's a lot of turmoil in these songs," he says, "but as far as my head space was, it was pretty clear and peaceful when I was writing them. I've written my share of stuff under troubled times in my head. I've got a divorce album in my past. But when I'm still in the dark time, I'm too in the fog to express what I'm thinking. I tend to write more when I'm coming out of the dark rather than in the midst of it."

Hood wrote the song "Baggage," which closes American Band, after the suicide of Robin Williams. Over pulsing, tripled electric guitars and a rhythmic drive that once might have been compared to Crazy Horse, but which is now the Truckers' own signature, Hood reveals his own struggle with depression. He knows he's fortunate to be "blessed with the means to repair."

"I had just come out of a dark period in my own head," he says of the song. "It wasn't the only time in my life that happened, but it was more troubling this time. The darker periods usually corresponded to outside events. I was depressed during my divorce or a death in the family. But I went through a pretty dark period around 2012 to 2013. There wasn't a corresponding event. It was just a deep melancholy. When I heard about Robin Williams' suicide, it just really hit me. Maybe because he made people laugh and forget their problems. He was very candid about his depression, but he seemed to have come out the other side. I wrote it at a bar the night he died. I literally wrote it on a bar napkin."

Taken as a whole, the turmoil that fuels Drive-By Truckers' latest album derives from a pre-election season of extraordinary discontent. That maddening season is over. This American band plans to greet the new one with the resistance of rock & roll.

"Initially, there was a lot of pushback to the album on the internet, but I haven't seen very much in person," says Hood. "Post-election, it's been strange. We were in Philadelphia the day after the election and thought, 'What the fuck?' It ended up being one of the best shows we've ever played. People needed the catharsis. Then we headed into the deep South for two weeks, and those were some of the most defiant, punk-rock shows we've played. That's where we'll pick it up. We're the opposition, the loyal opposition."