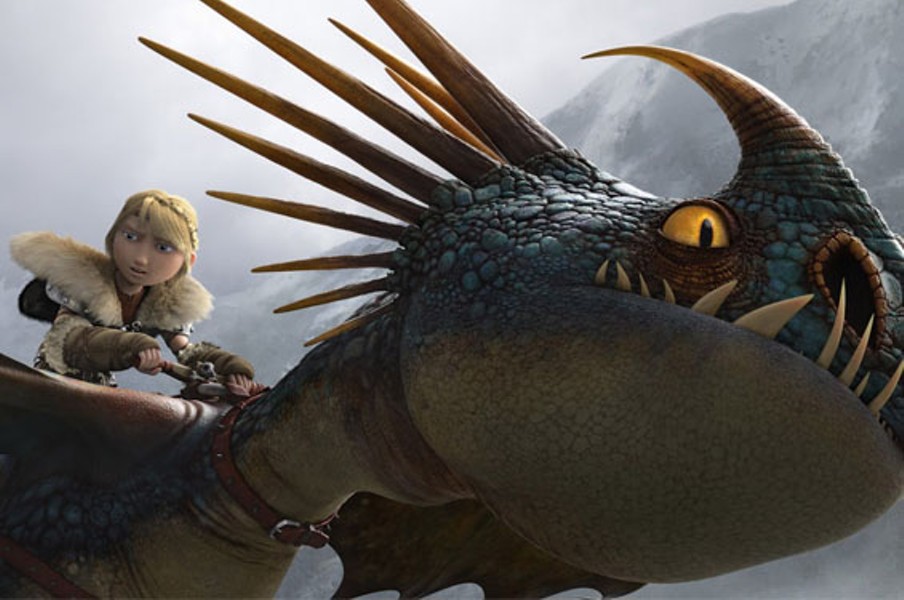 DreamWorks Animation LLC How to Train Your Dragon 2

If you ever have days when you prefer animals to human beings, How to Train Your Dragon 2 is your kind of movie. In some ways the second entry in this animated franchise is inferior to the first, released in 2010: The plot is needlessly busy, and much of the action is more manic and indistinct. But How to Train Your Dragon 2 cuts deeper than the first picture — it will be particularly resonant for anyone who has ever worked with or adopted rescue animals — and there are a few sequences of cartoon grandeur. Best of all, Dragon 2 marks the return of one of the most beautifully designed characters in modern animation, perhaps in all of animation, period: Toothless the dragon is back with a silent roar.

Presumably, if you've trained your dragon right the first time, it shouldn't have to be an ongoing thing. But all dragons, it turns out, can learn new tricks. At the end of the first film, young Hiccup (voiced by Jay Baruchel) and his good-guy dragon steed, Toothless, vanquished the mighty bad-guy dragon that was threatening the ancient Viking village of Berk. Hiccup lost a leg in the process, but as we see at the beginning of Dragon 2, he's more fearless than ever. And Toothless himself has a prosthetic tail fin, the original having been torn off when he was but a pup.

Dragons are no longer a threat to Berk; now that humans understand them better, they've become trusty companions. Even so, danger looms for humans and dragons alike in the form of Drago (Djimon Hounsou), a dreadlock-wearing villain who seeks world domination by luring every dragon into his control. (The movie strikes an unnecessarily sour note by pitting a villain of color against an otherwise all-white Viking population. What's the deal?) Amid this threat, another new character emerges, the mysterious Dragon Rider, a masked marauder who captures Hiccup and Toothless and whisks them off to Dragon Island, which is home to a magisterial ice cave and hundreds of wild dragons of all colors, sizes, and shapes. There are polka-dotted magenta ones winging through the air, and some whose skin resembles chartreuse velvet with red stripes. The babies — fat, willful little things with awkward, bumblebee moves — are particularly adorable.

Dragon 2 brings back most of the characters from the first go-round, including Hiccup's father, Viking chief Stoick the Vast (Gerard Butler), Stoick's right-hand galoot, Gobber (Craig Ferguson), and Astrid, Hiccup's feisty girlfriend (America Ferrera). You'll hear Cate Blanchett's voice in there, too, though revealing which character she plays would give away too many surprises. Director Dean DeBlois keeps the story moving efficiently enough, and despite the fact that the film has too many structural arms and legs wiggle-wagging in all the wrong places, there are some finely tuned dramatic moments, including a tragic twist that might be too intense for really little kids. (Heck, it was almost too intense for me.) As in the first movie, the numerous flying scenes, in which cartoon humans perch on the backs of their airborne companions, are perfectly enjoyable, especially in 3D. And the Dragon Island sequences, with their crazy-quilt assortment of creatures, many of them injured misfits, also give us lots to look at.

But back to Toothless: Hello, old friend! Hiccup is appealing enough as youthful heroes go, but he's really just another saucer-eyed cartoon character with a bulbous nose. It's Toothless who matter. Both comely and graceful in the air, he's even better on the ground, a sleek creature with a flat, heart-shaped panther's face and dazzling green eyes the size and shape of footballs. His scaly black skin is as discreetly lustrous as a '60s Italian sofa. His features show elation, confusion, and anxiety in a way that's partly human but perhaps more animal: When Hiccup admonishes him for some minor infraction, his ears flatten, like those of a house cat with hurt feelings. As the supposedly more important human characters march around talking about dumb human stuff, Toothless is often seen gamboling in the background, tugging on a stick with a dragon playmate or getting his tongue stuck on the icicle he's decided to lick. Toothless doesn't talk, none of the dragons do, which is one of the greatest blessings this franchise could bestow on us — no jibber-jabbering, no stuttering, no phony accents. Toothless speaks with his eyes, wide-open and playful or narrowed in watchfulness, and with his tail, a grand swish of a thing. He's the exuberant cartoon embodiment of a noble idea: Beastliness is next to godliness.

How to Train Your Dragon 2 is not showing in any theaters in the area.