Thirteen months ago, Jaz got into a street fight.

It started when she stopped along North Tucker to fix her hair in the reflection of a window of the Globe Building. She says a security guard wanted to run her off but eventually agreed that she could stay five or ten minutes to finish up.

The former headquarters of the defunct newspaper has been transformed into high-tech office space for entrepreneurs attracted to its powerful internet infrastructure and unique architecture. But it has also struggled to reassure potential tenants that their employees, clients and customers will be safe downtown. The building's promotional videos emphasize security features such as an underground parking garage that lets workers go from their cars to their offices without setting foot on the street.

Longtime tenant Gerry Claunch, who runs the software company GDC Integration Inc., is one of the building's biggest boosters. In a deposition, the 67-year-old told attorneys he saw the security guard that afternoon, October 3, 2017, trying to persuade Jaz to leave. He thought the guard wasn't being forceful enough. (Claunch declined to comment to the RFT.)

That was a problem for him. Recruiters have told him that prospective employees have looked elsewhere because they felt unsafe around the building, he says. So Claunch walked past Jaz and the guard, then doubled back.

"I just wanted to reinforce and try to help [the guard] get that person to move along, because it's an image that that building just can't have," he would later explain in the deposition.

There is surveillance video of the ensuing confrontation. Claunch, stocky with white hair and glasses, is seen shouting back and forth with Jaz. As she moves to his right, he steps in front of her and continues shouting. There is no sound, but the exchange is clearly heated.

Claunch would later say he couldn't remember exactly what was said, other than that he probably used a wide range of profanities. "I have a plethora," he said. "I'm probably king of the hill when it comes to vulgarities and profanities."

Claunch keeps screaming, in fact, until Jaz clocks him on the left side of his head. She later told a detective she thought he was getting ready to spit in her face.

The video is still recording as the blow sends Claunch's glasses flying. He turns and comes at Jaz, but she shoves him away. The guard steps in the middle, and the fight seems all but over. Jaz picks up her blanket and starts to head off.

But as she tries to walk around Claunch, he grabs at her left arm. It was not a great idea. In one smooth motion, Jaz pivots to her left while simultaneously whipping her right arm around like a belt. This time, she knocks Claunch to the ground, looking over her shoulder at him as he topples to sidewalk behind her.

Even then, the aging businessman rallies for one more round. Jaz is already up the block, but the video shows her dropping her blankets and balling her fists when she spots Claunch coming. He lunges head first, arms outstretched. Jaz scrambles backward and pops him on the top of the head.

By now, others have come out of the building and they move in to separate the two. A burly maintenance man bear hugs Claunch from behind and walks him back down the block while Jaz heads off into the distance.

All she wanted, she says, was five minutes to fix her hair.

Nine days after the fight, police found Jaz in a park and arrested her for fourth-degree assault.

A detective told her she might be out of jail that night or maybe the next day, but she spent more than two weeks in the city's Medium Security Facility, better known as the Workhouse, because she had no hope of paying the $1,500 bail.

In the workhouse, she was jailed with men. She is used to being hassled by men, but at least when she is downtown she can usually get away. In jail, there was nowhere to go. "I'd have to put myself in a corner to keep them from grabbing me," she says.

The first two or three nights, she didn't sleep, she says. Fortunately for her, she already had an attorney, Andrew Cook of ArchCity Defenders, who had previously defended her against city citations. He picked up the new case.

Cook was eventually able to get her released on her promise to show up for court. The assault charge was a misdemeanor, making it the kind of low-priority case that can languish for months in the court system. Cook says if he hadn't been actively looking for Jaz, she might still be in the Workhouse.

The circuit attorney's case turned out to be pretty weak. Cook wonders why anyone pressed it at all, except for the opportunity to push out a person whom downtown cops and business owners considered a nuisance. 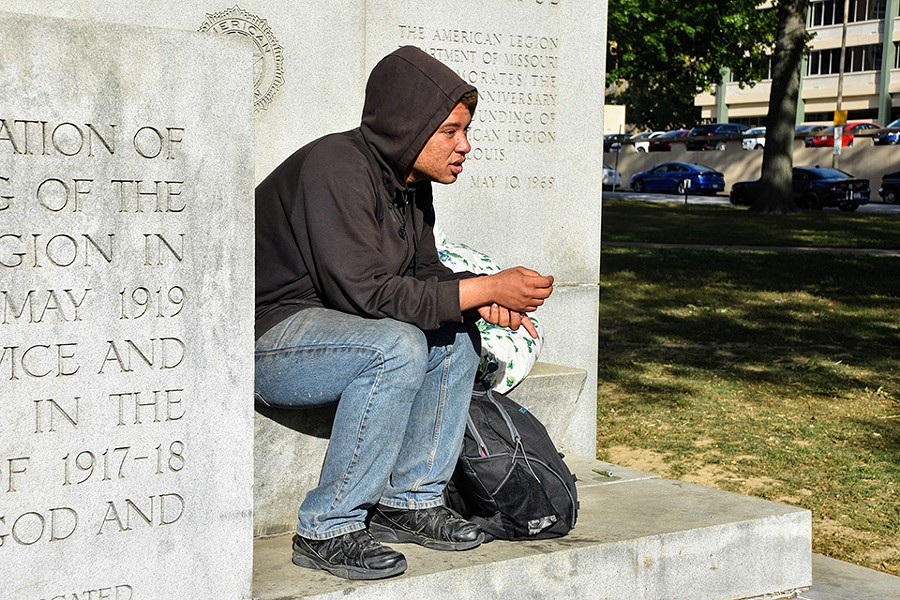 "Nobody seemed that interested in what happened," Cook says. "It seemed like a coordinated effort to get rid of someone."

Police reports showed the investigation began not with the department, but a security firm, Asymmetric Solutions. The firm works for Downtown STL Inc., an influential nonprofit that uses a property tax to boost business, attract tourists and deter crime. In Asymmetric, it basically has a shadow police force at its disposal. The security firm employs off-duty cops to patrol and conduct investigations. Although they're working for a paying client, they enjoy the full authority provided to cops.

In a statement, the St. Louis police described Asymmetric as an "approved secondary employer" with the ability to hire city cops to use their training and power as police officers: "As such, there is an overlap as an officer will still conduct his/her duties in accordance to the policies and procedures of the St. Louis Metropolitan Police Department while working police-related secondary."

Often, it is hard to tell where one role ends and the other begins. Such was the case with Jaz's situation.

A sergeant working a shift for Asymmetric identified her from still frames of the surveillance video provided by Downtown STL, according to police reports. When the sergeant learned the police department had not assigned a detective, he asked one who was also working a shift for Asymmetric, Detective Joseph Morrell, to take it over. Morrell tracked down Jaz, interrogated her at the police station and applied for the charge.

Even after she was released from the Workhouse, the charge remained. Jaz says she lived in constant fear she could be arrested again at any time as the case dragged for months.

One reason for the delay: Cook tried to get prosecutors to turn over the surveillance tape. In the end, they provided only a clip, one that omits the first part of the interaction where Claunch walked up the block and returned to get in Jaz's face. No one ever explained who had given it to Downtown STL to pass on to Asymmetric.

Downtown STL's security director declined to comment. Asymmetric, the Circuit Attorney's Office and management for the Globe Building all failed to respond to requests for comment.

The case finally went to trial in September. Cook argued Jaz had acted in self-defense against a man who tried to intimidate, threaten and harass her into going away. Jurors agreed, finding her not guilty after just 84 minutes.

Before Jaz left the courthouse, an alternate juror stopped her. The woman had a gift — a makeup compact so Jaz wouldn't have to do her hair in an office building's windows.