Jazmin exhales a cloud of shimmering breath and looks over the new autumn world in front of her. Leaves on the trees have begun to color; the air is crisp.

"I'm trying to get a little breakfast money, but these motherfuckers ain't shit," she says.

The 22-year-old stands at the exit of the McDonald's drive-through near North Tucker Boulevard, wrapped in a stained white comforter. Her curly hair is tucked inside the hood of a brown sweatshirt. She slept the night before on a slab of sidewalk about fifteen yards from where she is now posted up, begging customers for the balance of their Sausage McMuffin bills.

"Spare some change?" she calls out to passing cars. "Anything's a blessing."

She prefers to let the men pass. They are more likely to ask about her gender and, if they learn she is a transgender woman, proposition her.

"They be on that creep shit," she says. "I'm homeless. I'm asking you for help. I'm not going to suck your dick for no money."

In the nearly two years since Jaz arrived on a bus from Wisconsin, she has learned to navigate the dangerous, petty and occasionally hilarious ecosystem of downtown St. Louis. She has been cussed out, threatened and attacked. A year ago, she spent more than two weeks in jail after a sidewalk brawl with a tech-company owner who later explained that he'd lost his temper in part because lingering homeless people are bad for business.

Jaz says, "He called me a punk-ass bitch, a cunt. That cunt word, that really pissed me off."

Outside the McDonald's, a middle-aged employee wearing a spotless white shirt, black slacks and black sunglasses hustles around the parking lot with a broom and dustbin. As he moves, he looks in Jaz's direction repeatedly.

She eyes the man coldly before jumping into a story about a fight between a couple of women the night before. One apparently threatened to "slap the piss" out of the other, but it was the response that delights Jaz.

She loves the ridiculousness of it. Fierce and funny, she keeps up a running commentary on the characters and bizarre interactions that pass before her each day.

It is late October, and the wind is sharp. The weather is getting colder. Along with her comforter, Jaz has a thin pink blanket. The blankets, a couple of cheap lighters and a few toiletries crammed inside a small backpack are everything she owns. Winter is on her mind. Last year was frighteningly cold, and the city-owned shelter on the other side of McDonald's, Biddle Housing Opportunities Shelter, had to turn people away on the worst nights.

When a police officer who works with homeless people rolls out of the drive-through, Jaz questions her about rumors she's heard that shelters would not be adding extra cots for overflow this winter. The officer assures her the city is finalizing plans.

"They're still working on funding," the cop says.

Jaz nods but does not seem convinced. She returns her attention to panhandling as the officer drives on. Around 9 a.m., a sympathetic drive-through customer hands over a few singles. That brings Jaz's holdings to $8, which is enough. She slides her backpack over her shoulders, re-wraps the comforter around her and heads south into the heart of the city.

She says she had known him since she was young. She grew up in a big, blended family in the small working-class towns north of Milwaukee. She says she knew in elementary school that she identified as a girl and did not realize others would find it strange until she was bullied by classmates. Never one to back down, in high school she posted selfies on Facebook with her makeup and hair done, mugging for the camera as she documented "transformation Wednesdays." 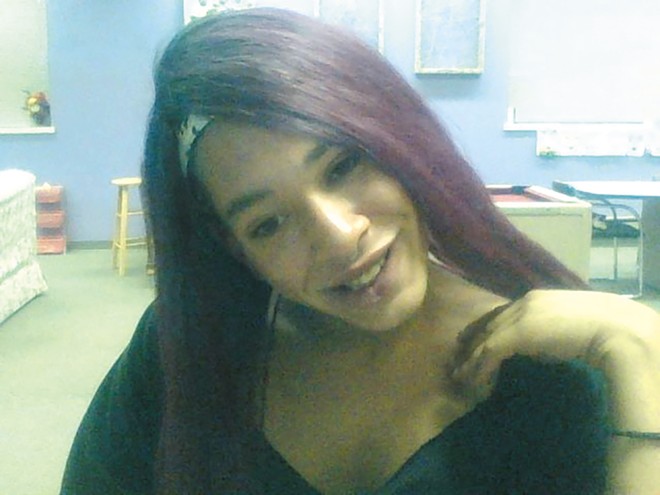 She says she spent large blocks of her teen years in and out of foster homes after quarreling with her mother and stepfather. She dropped out of high school after the eleventh grade. In her telling, she ended up homeless in the Milwaukee area after a cousin learned of her gender transition and put her out.

It was some bad advice that brought her to St. Louis.

Courvoisier had previously been shot and called a social services hotline in hopes of applying for disability benefits, Jaz says. The staffer suggested Missouri might be an easier place to get approved.

That did not turn out to be true.

"I thought as my life went on it was going to get better," Jaz says. "Hell, nah."

Two years after they arrived, she and Courvoisier are both on the streets, often split up and fighting, hustling whatever money they can. In late October, she says their on-again, off-again relationship is currently off because he is erratic and abusive.

"We talk about getting back together, but he's still doing the same stupid shit," she says. She later describes a recent run-in at one of the parks near City Hall: "He attacked me yesterday in this park with a stick. He cracked me in the back of my leg, and he tried to hit me in the back of my head." (By November, they had reconciled, she says.)

As she walks south on Tucker, she stops to chat — with a security guard minding the St. Louis Post-Dispatch's parking lot, with a young man in a torn hoodie scanning trash cans for anything useful, with a woman on her way to work.

"Girl, it is too cold out for that skirt," Jaz hollers.

"I don't give a fuck," the woman says, laughing as she slows down to give her a quick hug.

Jaz shouts across intersections to others who, like her, carry backpacks and blankets as they canvass the same sidewalks and parks every three or four hours. It can feel like everyone in the neighborhood is carrying on one long, rambling conversation, all but invisible to the attorneys and public employees hustling with diverted eyes to the nearby courthouses or government buildings.

There is comfort in the familiarity but also a sense of being penned in. When things go bad, it seems inescapable.