Less than two months later, Dow tried to make a purchase at the jail commissary with her inmate ID. It was rejected. That was a bad sign.

"I knew this," she explains now, "because there was a fellow inmate who did the same thing, hers wouldn't work, and the next day she was gone. I called Justin, and I told him, 'Babe, something's wrong.'"

Hours later, in the middle of the night, Dow was jolted awake. She'd been right: The deportation was finally happening. There would be no more jail visits from her husband and children. There was no time to say goodbye.

"I remember hearing the lock open up real loud," she says. "They called my name, told me to pack my stuff. I asked to call my husband and lawyer, and they said, 'No.'"

Instead, they took her straight to the airport and put her on a plane to Chicago, and there she was handed off to another ICE agent as they waited for her direct flight to Thailand to board. However, this federal agent seemed to have a heart: He let her make a phone call.

Justin was in the shower, so the first call went to voicemail ("I was so mad!" she recalls), but the second was picked up by his mother. Justin proceeded to call their new immigration attorney, Javad Khazaeli, "about a hundred times" — finally reaching him as he was in the act of moving out of his Chicago condo.

Khazaeli was no small-town lawyer. Like Dow, his parents had brought him to America as a child in the late 1970s. As a dual citizen of Iran and the U.S., he became an immigration attorney and joined the federal government's counterterrorism efforts under the George W. Bush administration, eventually spending more than a decade as a prosecutor with the Department of Homeland Security and ICE.

In 2014, Khazaeli left the government and went private. He'd been stunned reading coverage of Dow's pending deportation in the St. Louis Post-Dispatch. He reached out to Debbie Peterson and, with her backing, won Justin's trust to take the case pro bono.

Khazaeli had worked out an agreement with ICE that he would be notified when Dow's travel documents were finalized, but he says the agreed-upon warning never came. On the day of Dow's deportation, Khazaeli was caught unprepared. He had all the resources of a phone, his neighbor's stolen Wi-Fi and a 1996 Chevy Blazer stuffed with furniture and other items destined for his new home in St. Louis.

He had less than two hours to stop Dow's flight. Which left three options.

"I could go to the airport and try to fuck stuff up there," he recalls thinking, "but I didn't even have a suit, and they're not going to let some Iranian guy just fly through security."

There wasn't time to file a motion with the federal court. That left one option.

Khazaeli called ICE, reaching a former colleague in the agency's "enforcement and removal operations" division, texting him repeatedly to get out of whatever meeting he was in. "I'd never pulled a card like this before," Khazaeli says. "He gets out of the meeting, I tell him what the deal is, and he basically says, 'You're not going to screw me on this, you're not hiding something from me?'"

Sitting in his condo's hallway with his laptop pressed to a neighbor's door (the only place he could get a signal), Khazaeli logged into his email and hammered out a message to his ICE contact summarizing the details of the case, covering Dow's immigration history, her lack of resources in Thailand, the advocacy of Debbie Peterson and the progress he'd made toward getting Dow's 2013 felony conviction set aside.

As Khazaeli understood it, ICE's logic tilted on the judgment that if Dow wasn't worth deporting, "then we're just going to send her home."

Khazaeli hung up the phone and immediately dialed Justin to tell him the news. In Chicago's O'Hare International Airport, the ICE agent told Dow that her travel plans had changed — and she nearly tackled him with a hug when she learned her final destination.

In the Daily Journal's Park Hills office, Renee Bronaugh hit publish on a dramatic update to her earlier deportation story and got on the road, joining a rush of local and national reporters scrambling to get to St. Louis Lambert International Airport before Dow's arrival.

Justin was already on his way.

For Dow, it was the end of a day that began with the doomed sound of her cell clanging open and a command to pack. That same evening, she walked out of the Lambert terminal in a loose white shirt and sweatpants, carrying the same red mesh bag into which she'd stuffed the meager jailhouse possessions — a few shirts, a single pair of underwear, letters from Justin — which she'd expected to use in her new life in Thailand.

Instead, she was returning to what she'd been ripped from. The moment she emerged from the terminal, reporters crowded, cameras in hand, as Justin and Dow collapsed into each other. 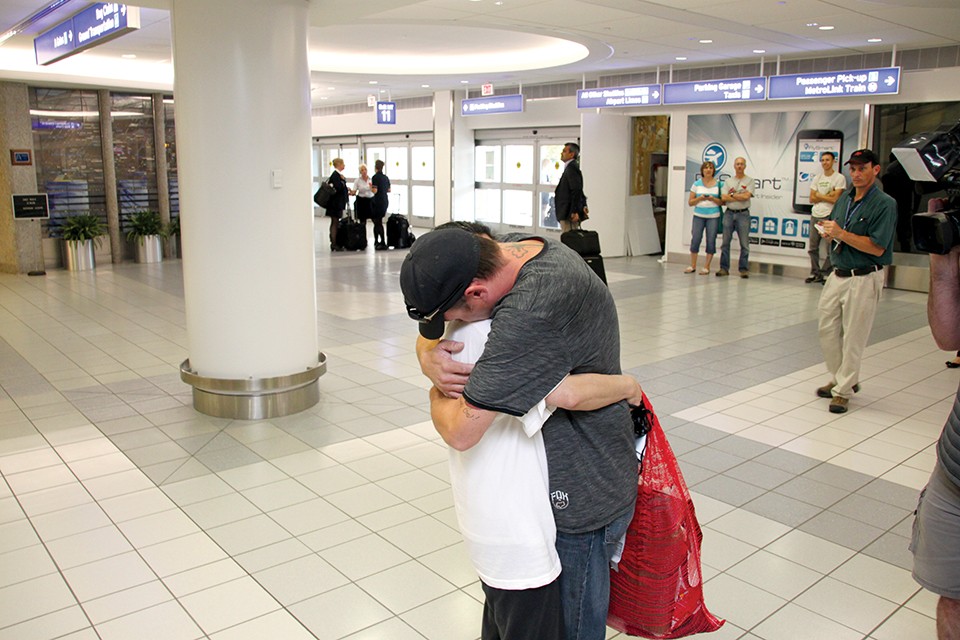 It is April 9, 2021, and Justin ascends the courthouse stairs to sweep America's newest citizen into his arms. Dow holds a small American flag and a grab bag of items, including the printout of the Oath of Allegiance, information on voter registration and one truly precious possession: a spotless white folder stamped with the seal of U.S. Immigration and Customs Enforcement.

At the bottom of the stairs, Javad Khazaeli and Renee Bronaugh applaud. For all of them, this is a reunion combined with epilogue. The years had passed, and none of them felt like the story was truly over.

After the near-deportation, Khazaeli had stayed on the case, eventually filing a joint motion with the St. Francois County prosecutor to set aside the 2013 guilty plea on the basis that Dow's former attorney had failed to advise her of the deportation consequences of a felony conviction.

It took six months, but in December 2014, the judge agreed to the motion. With the blessing of Debbie Peterson, prosecutor Jerrod Mahurin dismissed the criminal case entirely. A year later, the deportation order against Dow was officially dropped. Once again, she was made a "lawful permanent resident" in a country where she had spent most of her life.

But after everything, Dow wasn't satisfied with a green card. Unlacing her arms from Justin's, she approaches Khazaeli and hands him the white folder from her bag. Tenderly, he withdraws her certificate of citizenship.

"We had to hit so many half-courters to make this," he muses. "We needed a former government lawyer, someone at ICE willing to answer their phone, a prosecutor willing to set aside a conviction, a judge willing to accept the plea and a husband relentlessly fighting for his wife.

"If any one of those people weren't there," he concludes, "this couldn't have happened."

Despite everything, it did. In the end, all it took was a federal judge, a twenty-minute ceremony and a piece of fancy paper. For Dow, "It felt like someone giving me a second chance, like my rebirth."

"How can I express it?" she says, shaking her head. "It was like someone telling me that it's going to be OK, for me and my family. It feels like we're one now, instead of me just being ..."

Justin picks up where Dow trailed off. "It's like a big 'What now?' moment."

It's the uncertainty of it all. Dow is 53. She'd spent some 35 years incorrectly believing she was a citizen, and it had nearly cost her everything. And even as she and Justin rebuilt their lives in the aftermath of near deportation, there was no illusion about the thread holding up her freedom, and how easily, how quickly, it could be snapped. ICE could show up any day and take Dow back to jail, put her on a plane and send her away.

For Justin, the past ten years tested his body and resolve. His lower legs are covered in skin grafts and scar tissue. Earlier this year, after nearly a decade of recovery from a car crushing his legs, he went back to work — fixing cars as a mechanic.

In 2014, with his wife in jail and his family in crisis, Justin got Dow's name tattooed around his left ring finger. It now appears faded on the skin, the ink roughed away by time and engine parts.

But the feeling is deeper than skin, more real even than citizenship. It's love.

"It's just a relief that no one can take her," he says. "She's as American as you can get."