Inside a sunlit conference room high within St. Louis' federal courthouse, Komdown "Dow" Boyer channels her nervousness into her hands, lacing her fingers in her lap. Around the room, arranged like students before a test, are fifteen soon-to-be citizens.

They have each waited months for this moment, passing interviews, citizenship tests and background checks. Today, they are here to take their final steps to naturalization. Dow is here to take back her life.

As they wait for the ceremony to begin, some candidates play absentmindedly with the small American flags they were given at the door, others glance through a printout of the Oath of Allegiance, scanning its formal herebys and heretofores, its vow to defend to the Constitution, its renunciation of "any foreign prince or potentate."

Dow has never known a prince, but she knows what it's like to be foreign. As a child in 1977, she said goodbye to her grandfather in Thailand to move to California with her recently married mother and her U.S. airman stepfather. From her birth country, Dow took with her memories of her grandfather but little else. She grew up believing she was American.

A black-robed federal judge enters the room. Dow thinks of her last experience with a judge, in 2013, which nearly led to her deportation and separation from her family. For a moment, she can't help but worry that something could still go wrong.

But this time, the judge is here to make things right.

The ceremony begins with the judge's introduction: "Welcome to our candidates for citizenship, family, friends and invited guests. This is a very exciting day."

The remarks betray, perhaps, a lack of recent updating: Normally, there would be pomp to accompany the patriotic ceremony; instead, the ongoing circumstance of pandemic has shrunk the warm celebration into a bare-bones, 20-minute sprint. There are no family, friends or invited guests, no vocalists belting "America the Beautiful" or speeches delivered by the new citizens themselves.

The closest thing Dow has to guests are the three people — her husband, her attorney and a reporter — waiting to greet her on the courthouse steps. Each played a role in the drama that overtook Dow's life more than seven years ago, when an arrest and theft charges brought her to the brink of deportation, launched her into the national news and culminated in an eleventh-hour legal intervention at the moment when all seemed lost.

Dow survived and, with help, rebuilt her American life. But until this moment, in this room in a federal courthouse, she could never be sure that it was truly, finally, over.

At the podium, the judge finishes her introductions. The candidates stand and recite the Oath, and, one by one, they are called forward to receive their certificate of citizenship.

Dow listens for her name. 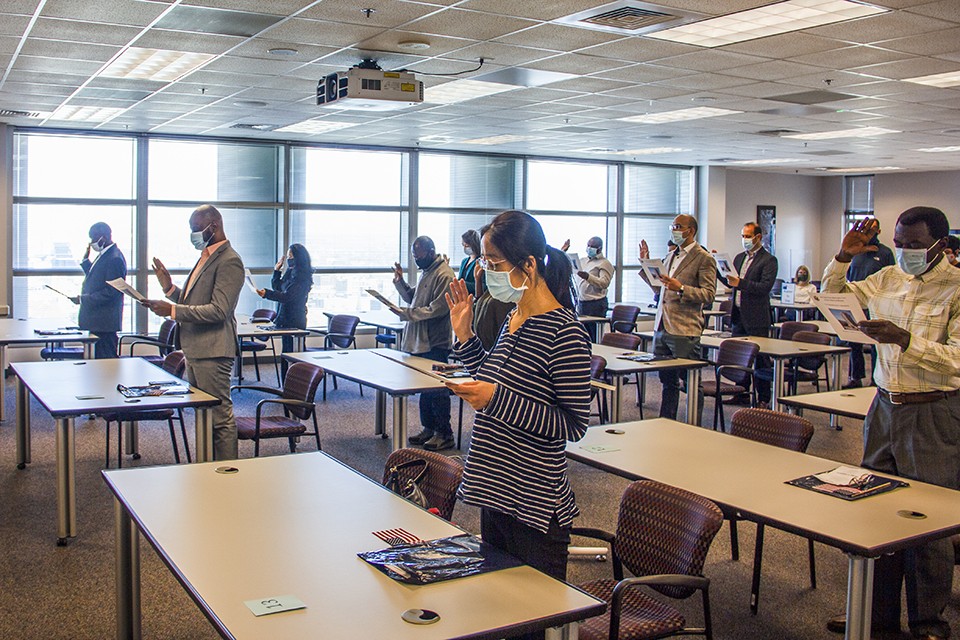 Dow was nine years old when she arrived in America, landing first in military bases in Hawaii before settling for a time in California, where she experienced "my American moment of food."

Dow has had many American moments, not all of them good. In a wide-ranging interview — the first she's given since the drama of her near-deportation in 2014 — she retold the story of her journey to the U.S., starting with a painful separation from her grandfather in Thailand, a devout Buddhist who raised her after her mother married a U.S. airman stationed in the Philippines.

"It was poverty," Dow recalls of her early life in a village. "We lived with our cousins in the jungle, with no electricity. My mom couldn't raise me by herself because my father passed away, so she went off to the city to get a job. My grandpa was the one that raised me."