STEVE TRUESDELL Images of heavily armed police six years ago in Ferguson shocked the country. Now, similar scenes are playing out in every major U.S. city. 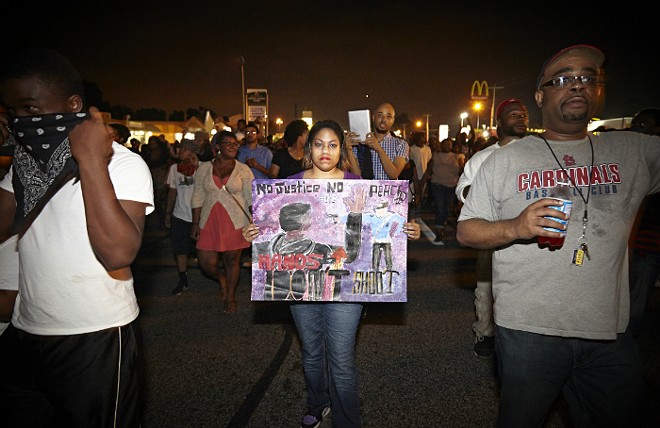 In Ferguson six years ago, protesters birthed an uprising echoed in today's George Floyd protests. Crowds built and built until they were impossible to ignore, and pioneers of the Black Lives Matter movement demanded officials address the government-sponsored inequalities that churned up those who spent their entire lives at their mercy.

The national attention helped unearth a long history of predatory policing and a municipal court system that trapped people, particularly poor African Americans, in inescapable cycles of fines and violations for not paying fines.

The Justice Department investigators' report found that the city had twisted its priorities away from providing services to treating its residents as a primary revenue source, taxing them through an insane amount of traffic stops and code violations that had little to do with safety or providing services. In an email memorialized in the report, the city's finance director wrote to the police chief that "unless ticket writing ramps up significantly before the end of the year, it will be hard to significantly raise collections next year. ... Given that we are looking at a substantial sales tax shortfall, it's not an insignificant issue."

The Justice Department pushed the city to sign a consent decree designed to overhaul the police department. When the city resisted, citing the burden and expense of the multi-year pact, the feds sued Ferguson, eventually cajoling municipal leaders into an agreement.

The flexing of that kind of federal muscle is considered government overreach by the Trump administration. The president has made a platform of supporting the most ruthless impulses of policing in America, openly lusting for more aggressive tactics. When a protester wearing a "KKK Endorses Trump" shirt at one of his campaign rallies in 2016 was ejected from the crowd, Trump complained from the stage about the supposedly gentler norms of the present.

During a 2017 speech to Long Island cops, Trump suggested they skip the practice of protecting suspects' heads as officers load them into squad cars. "Please don't be too nice," the president said. "Like when you guys put somebody in the car and you're protecting their head, you know, the way you put their hand over, like, don't hit their head and they've just killed somebody, don't hit their head? I said, 'You can take the hand away, OK?'"

As protests have spread across the country, the president has threatened a violent crackdown.

"When the looting starts, the shooting starts," he tweeted on May 30, a phrase lifted from the racist rhetoric of a former Miami sheriff during civil rights era uprisings in 1967.