Over the many years I've spent lighting plants on fire and inhaling the chemical result of the ensuing decarboxylation, I've come to befriend a number of people who've made at least a portion of their living selling said plants.

I've mentioned a few of them in this space before. There's my most recent former dealer, the ever-trusty Mr. Nickname; there's The Guy, an interior design visionary whose doorless and dilapidated trailer home practically birthed the concept of minimalist decor; and of course there's That Guy, with whom I have very little memory outside of a terrible night spent watching Natural Born Killers in his home. There are a couple of other otherwise nameless Guys about whom I've shared anecdotes as well: my former dealer with a doorbell hooked to his basement window for ease of purchase, a friend and his dad who used to employ mustard to keep police dogs off their scent, and on and on. I've shared these stories about these colorful characters, but always in a way that was light on the details, owing to the fact that the state and federal governments have long held a less than enlightened attitude toward this particular line of commerce.

But with the Missouri medical marijuana market now in full swing, we've finally reached a point where I can loudly announce to the world, in a paper with a circulation of many thousands, that I know some people who sell weed, and where you can go to purchase their wares. In other words, this is my roundabout way of a disclosure for this column: I have friends who are part of the ownership group for the Star Buds shops in Missouri.

Star Buds is a heavy-hitter chain of dispensaries first established in Colorado in 2013, which has since branched out to include locations in South Dakota, Oklahoma, Baltimore, Missouri and even Jamaica. Its Missouri locations thus far include a spot in Festus and one in University City; I stopped by the U. City location on a recent sunny afternoon to sample their wares. For the record, I did not tell anyone I know that I was coming, and I have no reason to believe that any of the employees working at the time had any idea who I was.

Check out our Reeferfront Times for more cannabis news and reviews.

Upon entry, I went through the usual rigamarole of handing over my ID and med card before being buzzed inside the sales floor. Once inside, I was gobsmacked by the selection — with approximately 40 different strains on offer from multiple cultivators, Star Buds just might have the largest variety of flower I've seen so far in a Missouri dispensary, as well as a healthy amount of edibles, vape cartridges, concentrates and accessories. Equally exciting is the fact that this dispensary is the first I've visited in this state that operates deli-style, meaning that rather than the pre-packed flower you might purchase from another shop, Star Buds' flower is kept in large glass jars and weighed out for the customer in-store on an individual basis. This allows you to really see and smell what you're getting, and to pick out strains with the help of your own senses rather than just what your budtender might have to say.

After drooling over the many strains on hand for a while, I decided to pick up some Sundae Driver, whose buds were enormous multicolored mutants, as well as some Strawberry Float, whose smaller buds were absolutely encrusted with a dusting of keef. Star Buds uses a model wherein prices are set based on the quality of the cannabis: Connoisseur flower is the most expensive at $25 per gram, below that is Top Shelf ($22 per gram), Staff Pick ($20 per gram), Premium ($18 per gram), Special Classic ($16 per gram) and Classic ($15 per gram). The shop also offers budget options under the label of Shake ($10 per gram) and Smalls ($13 per gram), and there are price breaks once you get at least an eighth. 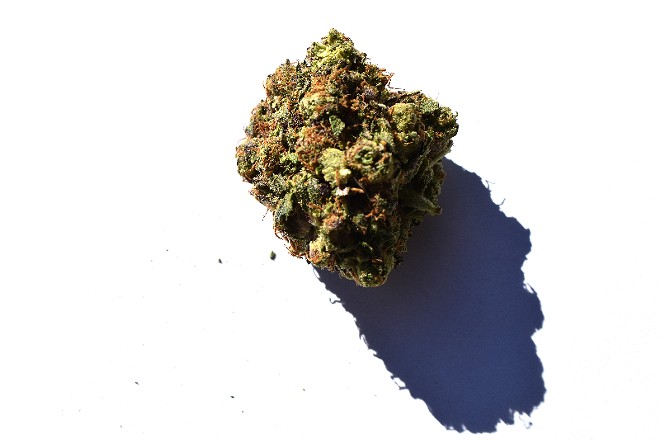 I got two grams of the Sundae Driver, a Top Shelf pick, for $44, and two grams of the Strawberry Float, marked as Premium, for $36. I also grabbed a package of gooey butter cake bite edibles for $37, because I'm a true St. Louisan whose blood bleeds butter. All told, I spent a total of $132 after taxes for the pleasure.

I dug into the Strawberry Float first. Illicit Gardens-branded and rated at 23.17 percent THC, these smaller buds looked almost as though they were hand-rolled in keef, with that powdery goodness stuck in every crevice. Imagine you went to Olive Garden and had a stroke before you could say "when" to the gentle Parmesan cheese laborer — this is the keef equivalent to that amount of cheese. The buds ranged in color from a pine green to almost white where the keef concentration was highest, and upon opening the bag I was met with a sour, tangy smell with floral and citrus hints. On breakup, this strain is powdery, not sticky and crumbles easily to tiny rocky bits and dust. On inhale, it tastes like it smells, with a little fuel-like feeling up in the sinuses as well. As for effects, I found this to be an exceptionally chill high that left me feeling relaxed and ready to conquer the day. I didn't feel any anxiety or dry mouth, and I didn't find it to be terribly appetite-inducing, but it's a good all-around strain that smoothed out my chronic pain without being debilitating. A nice mood elevator that's good for creativity as well.

Next up, I tried the Sundae Driver. Nearly all of the two grams came in the form of a single bud, a monstrous pale-green fluffy thing with purple and pink accents throughout. Cultivated by Morgan County Farms (my first experience with this grower) and rated at 15.41 percent THC, Sundae Driver is a well-regarded hybrid made by crossing Fruity Pebbles OG with Grape Pie, with limonene as the dominant terpene. This bud was remarkably lightweight, almost like styrofoam, and made a crackling sound when I crumbled it in my fingers, easily reducing to a powdery consistency. On inhale, I detected a taste that I described in my notes as "lightly seasoned Mexican soup / cilantro cleaning product," which sounds like a pretty bad soup but makes for a nice smoke. As for effects, I felt a mellow, relaxed high not dissimilar to what I experienced with the Strawberry Float — both strains are great for chilling without zoning out too hard. (A word of warning for those who use a pipe or a bong: This stuff burns quickly and reduces to dust easily, so be aware that you'll be at risk of sucking the bowl through.)

Finally, I got into the gooey butter cake bites. Packaged in a round plastic tube that, in another life, might have held my collection of pogs, these ten cookies are Osage Kitchen-branded and each contains 10.53 milligrams of THC. The gooey butter cake smell that wafted from within was unmistakable, even though the cookies themselves didn't have any actual goo to them, instead appearing about the same as a shortbread cookie might. I ate two of them, and let me tell you, if I wasn't afraid of blasting off into outer space I could have easily consumed the entire tube. I could detect no flavor of cannabis, even — just Cardinals baseball, the Arch and delicious red bricks. As for effects, I found these to be a pretty low-intensity affair that mostly relieved a bit of muscle soreness and left me feeling relaxed. I'd say these are probably a great choice for a beginner or someone who is looking for a mellow high.

At Star Buds, though, you can pretty much find anything you're looking for, thanks to their wide selection and deli-style service. In speaking with budtenders across the St. Louis area, I've come to learn that several dispensaries are planning on rolling out their own deli-style service in the future, and that the only reason we're not seeing more of that already is due to the enhanced safety measures and regulatory confusion that has come with COVID-19.

Meanwhile, if you're interested in having that experience now, or if you just want a truly breathtaking number of strains to choose from, Star Buds is a good option. Don't let the fact that they're friends of mine scare you away.


Thomas K. Chimchards is RFT’s resident cannabis correspondent and amateur lens cap photographer. Email him tips at [email protected] and follow him on Twitter at @TOMMYCHIMS.