THOMAS CHIMCARDS The Flora Farms-brand Gorilla Glue (a.k.a. GG4) stocked by N'Bliss packs a wallop and is great for pain.

In the Wild West days of cannabis prohibition and an unregulated black market, strain names frequently amounted to little more than a sales gimmick.

Oftentimes, when a dealer would claim to know the name of the strain he was trying to sell you, he was actually completely full of shit. In many cases, he was handed an unmarked sack of greenery by whoever his supplier was, who would give him some name for it that no one could ever confirm. Still other times the dealer would just make some shit up, knowing well that a strain dubbed "Snoop's Secret Stash" or whatever is going to pique the interest of your average stoner more than some no-name sack of buds.

Then, of course, there's the classic drug-dealer twist on the ol' bait-and-switch.

It goes like this: Your dealer claims to have two different strains of weed, one named, oh, I dunno, "Tommy's Top-Tier" and the other, perhaps, "Chimchards' Delight." That Tommy weed, he'll explain, is really great stuff, definitely nothing to sneeze at, and comes in at $50 an eighth. But this Chimchards' Delight — oh man, this is really awesome stuff, much better than most of the dreck in town, very special, wow. The only issue is that it's a little pricey — $60 an eighth — so if you'd rather just go with the Tommy stuff that's understandable.

Ask any such unscrupulous dealer and they'll tell you: No one ever, ever picks the cheaper stuff — not with such an intriguing sales pitch. But here's the secret: It was all the exact same weed, and you just got taken for ten bucks.

It's for these reasons that I was always skeptical of strain names when purchasing on the black market. But now that I get my weed from the dispensaries, it's opened up a whole new world, one in which I can become familiar with the effects of a strain that I like and then seek it out deliberately to replicate those effects, with no concern that the person selling to me is completely full of shit.

Which is exactly what brought me to N'Bliss' Ellisville location on a recent afternoon in search of an eighth of Gorilla Glue. A famously potent strain I'd sampled in pre-roll form for last week's review, GG4, as it's sometimes known, was so effective at tamping down my chronic pain that I decided to seek it out in a larger quantity, and N'Bliss' website indicated that it had eighths of it in stock from Flora Farms. Since the pre-roll I'd tried was Clovr-branded, I decided that it was fair game to sample the same strain in back-to-back reviews, though I'll also admit that my overall desire to not be in pain when at all possible definitely factored into this decision.

N'Bliss is located in a small strip mall on Manchester Road, sandwiched between a medical supply store and a doggy daycare. Upon walking in the door you enter a waiting area containing a front desk, a selection of the shop's CBD products and apparel, and a few chairs. I didn't have to wait any time at all after handing my ID and medical card over to the woman behind the desk, and I was promptly led to the shop's sales floor. There, under a large sign that reads "Helping individuals find their path to Bliss," is a long, lighted glass case displaying the shop's flower options, with a second glass case on the left-hand side containing its edibles. 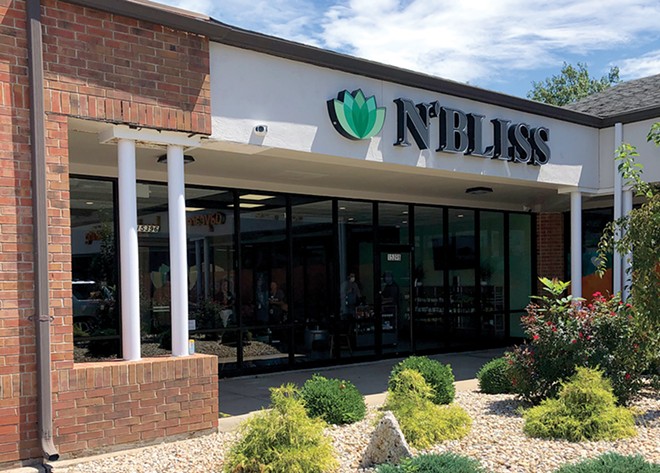 N'Bliss stocks a good-sized selection of the local cannabis flower brands. In addition to the Flora Farms products, it carries stuff from Proper, C4 and Sinse, amounting to more than a dozen strains — more than most dispensaries I've visited thus far. Along with the eighth of Gorilla Glue that brought me here ($54.99), I picked up a gram of Love Affair ($19.99) and a bag of THC-infused chocolate chip cookies ($39.99). After taxes, my total came to $129.90.

Naturally, I got into the Gorilla Glue first. This Flora Farms batch came with a lower THC rating than the C4 pre-roll I sampled last week — 17.1 percent, compared to 19.41 percent — so I was unsure if it would be as effective. Upon opening the bag I was met with some tight, dense light-green to lime-green buds, frosted with trichomes and a dash of orange hairs. On breakup, there was a strong fuel-like smell, and the buds crumbled apart easily enough, though they left my fingers pretty sticky. On inhale, that fuel taste was prominent but pleasant, and soon I found myself suitably stoned, with my chronic pain once again delightfully soothed. This batch of Gorilla Glue was definitely less stupefying than the C4 stuff, and I found myself far less spaced-out and forgetful, though I was forgetful enough that I walked away from my notes in the middle of writing about how not forgetful I was and didn't remember to return for a good half-hour or so. Do with that information what you will.

Next up I tried out the Love Affair. A Proper-branded strain boasting a whopping 27.76 percent THC, these buds were dark green on the outside, almost purple, and got lighter and lighter on breakup until there was a white-ish green in the center. Breaking these up with my fingers was nearly impossible; the buds were super dense and hard, and ripping chunks off with my nails reminded me of trying to tear apart a hunk of Bazooka gum — a grinder is highly recommended. The smell was grassy, but with something light in the background that reminded me of a clean hospital room filled with unidentified Chinese food — very pleasant. On inhale, too, it was outstanding, with that fuel-like taste and its accompanying feeling in the sinuses. This strain left me feeling focused and energized, and definitely more of a sativa high — super potent, but good for getting stuff done.

The cookies were described to me by my budtender as "dangerous," and he wasn't lying. The Sweet Stone-branded bag contains ten shortbread cookies total, each packed with ten milligrams of THC, but you'd never know there was anything cannabis-related in them if you didn't read the bag. I couldn't detect a weed taste at all, just buttery deliciousness coupled with white and milk chocolate chips, and the cookies melted in my mouth as I was eating them. If these came by the sleeve, I'd have eaten an entire sleeve — they're that delicious — but being that they pack a pot punch, I only had three. About 40 minutes after consuming them I started to feel a head high, and by an hour in I felt my pain subside as a relaxing body high kicked in. It all was very pleasant and soothing, not at all overwhelming, and I found myself super interested in listening to music, feeling as though I could hear details and sounds that I'd never noticed before in songs I'd heard a thousand times. Highly recommended.

In this new, regulated world of legal cannabis, it's nice to have some reliability in strains, even across growers — I was a bit skeptical as to whether I'd see similar pain-relieving results from the Flora Farms batch as I did from the C4 pre-roll, but I was pleasantly surprised. It would seem we're leaving some of the shady practices and gimmicky bullshit of an unregulated black market in the rearview mirror — and that's definitely something worth celebrating.

Welcome to Higher Thoughts, wherein ol’ Tommy Chims smokes one strain from this review — in this case, Gorilla Glue — and then immediately writes whatever comes to mind in the hopes of giving you, dear reader, a clearer picture of its overall mental effects: no rules, no predetermined word counts and, most crucially, no editing. Here we go:

In response to his endless airing of our dirty financial laundry over the years — constantly jumping on television and telling everyone just what we in the St. Louis area are using our money for — I propose a TV news segment called "Elliott Davis Paid For It." We send a cameraman and a reporter to follow him when he leaves his house and catalog all the things he spends his money on and, like, dig through his trash for receipts and stuff like that, and then blindside him about it unexpectedly with cameras rolling.

"Mr. Elliott Davis, the cashier you just dealt with is working deep undercover for us, and she reports that you just paid for multiple store warranties on a stash of small electronics. How do you respond to these allegations?" "Mr. Elliott Davis, according to this receipt we found on the floorboard of your car you purchased SIX tacos on your most recent trip to Jack in the Box. Wouldn't you agree that four is enough tacos?" "Mr. Elliott Davis, why did you spend your money on a lawyer to file a restraining order against us?"

I'll grant that it doesn't have any news value; I'm just saying I'd watch it, is all.

Thomas K. Chimchards is RFT’s resident cannabis correspondent and regular consumer of six or more tacos. Email him tips at tommy.chims@riverfronttimes.com and follow him on Twitter at @TOMMYCHIMS.