PHOTO BY MABEL SUEN Dim sum has become the brunch of choice for adventurous eaters and homesick college kids alike. 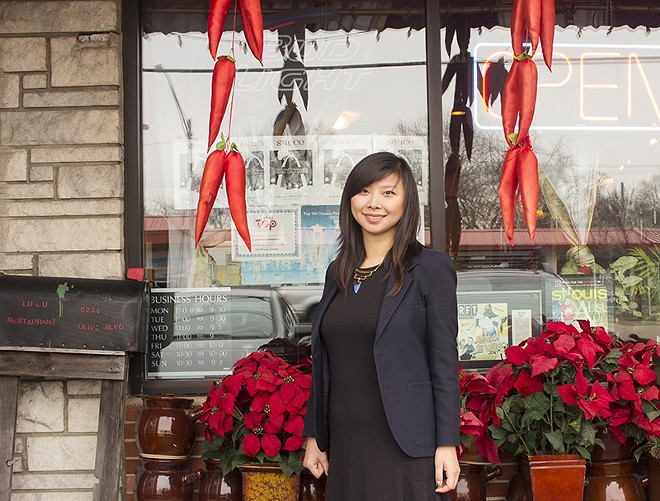 Li, 28, is the ideal person to serve as a culinary sherpa. The daughter of Lu Lu founders Jenny Lu and Jerry Li (uncle LiMing Lu is also a co-owner), she's grown up in the business, watching her mom go from an employee in an Americanized Chinese restaurant to an envelope-pushing restaurateur.

Though the food business would have been a natural fit for Li, she opted for the arts when it came time to forge her own career path. She landed an impressive career in event production for Nickelodeon, then in branding and digital activation for Disney-ABC. Eventually, she found herself living in New York working for hip-hop legend Jam Master Jay's company, Scratch Music Group.

Li could not dismiss the feeling that she needed to be home. In 2014, she moved back to St. Louis to help her family expand its brand. She's been instrumental in elevating the original Lu Lu's profile, though her more ambitious project is launching several locations of their new, fast-casual concept, Lu Lu's Fresh Express.

"It's a push-pull with my family," Li explains. "I want to serve the most authentic food possible, and they think that people want more familiar, Americanized things — so I sneak in the authentic things."

There is nothing sneaky about the feast Li has assembled at our encounter, as the spread before us represents the mainstays of traditional dim sum — jellyfish, steamed pork buns, shrimp dumplings, sticky rice in lotus leaf.

Sensing my apprehension at making the first move, Li offers a friendly observation.

"Dim sum is really just like Spanish-style tapas," she says. "Just think of that that way. Really, it just means 'tea time.'"

Though several variations exist, Li's translation captures both the essence and history of dim sum. The practice originated in southern China, near Guangzhou, as a means of feeding travelers along the Silk Road. Hungry patrons would stop in the area's numerous teahouses and, needing a bite to eat, would nosh on small snacks before heading on their way. In this sense, the tradition is a hybrid between tapas and British high tea.

And tea, it turns out, is to be the day's first lesson. "One of things you do at dim sum is pour tea for other people," Li says as she fills my cup. "What do think of this flower tea?"

The tea in question, made from a blooming chrysanthemum blossom, is one of several varieties of the hot beverage available for purchase at Lu Lu's dim sum. Li suggests adding a few sugar crystals to the perfumey liquid before continuing her lesson.

"There are no rules in dim sum," she insists. "But in general, the person with the most experience will be the one who orders. This doesn't have to be for every course. If there are several people there who know about the place, they can take turns ordering at each round. Generally, though, one person takes the lead."

As if on cue, a server stops her cart alongside our table and Li adds to our collection of dishes, pausing to ask for my preferences before she converses with her in Mandarin about what's available — that even a seasoned dim sum veteran has to ask what something is on the cart is comforting. There is back and forth, and then Li simply points and nods at her selections. Shrimp dumplings, barbecue pork bun and tofu paper make their way to our table, and the server hurries off. The entire exchange is curt, businesslike and utterly transactional, a big difference from the entertainment-style of service so often found in the U.S. and something that Li is quick to address.

"That's another thing to be aware of," says Li. "Service is not like it is at other restaurants in the U.S. The servers aren't especially friendly. They're not being rude, just culturally they are there to serve and not be a part of the meal. That's the one thing we get complaints about here — not our food, but that people think the service is bad. When I first came back I tried to retrain everyone to be nicer and they just looked at me and said no."

Li may be able to speak with our servers in perfect Mandarin, but as I look around the room, I notice the various other forms of communication going on. Some people flag down the servers with the pushcarts; others, more brazen, walk across the room to the cart with their dishes of choice. Newbies, who seem to communicate solely by pointing, feel obligated to order something every time it's offered. That sort of pace, however, would be difficult to sustain, as cart after cart, each dedicated to a different genre (steamed foods, fried foods, cold foods) passes by one after another on a nearly continual basis.

Li's instructions come nearly as quickly. There's the point about pouring tea, the ordering etiquette, the service style and the different types of carts. She talks about how everything is priced à la carte and that the server will tally up your bill at the end of the meal. Digging directly into one of the dishes in the center of the table is fine; there's no need to put it on your plate first, she insists. It's good form to put food on other people's plates. It's fine to point at what you want, and it's equally fine to leave food, since you're certain to order way too much.

The only thing left in our lesson is the food, though it's difficult to narrow down must-try dishes from the literally hundreds of offerings that cruise by our table. Were I not with Li, I probably would have stuck to the familiar: a pork bun, some dumplings, maybe a seaweed salad. And I would have been pleased with these choices. It's no surprise that the fluffy sticky buns, stuffed with succulent char sui, or barbecue pork, have made their way onto Western menus.

Still, the breakout dish for me, something I probably would have passed on had I not been trying to impress Li, is the beef tendon. The strips of paper-thin meat, spiked with chilis and garlic to cut through the pleasantly oily texture, seem oddly familiar. And then it hits me: this is the same mouthfeel you get from prosciutto.

In that moment, finally liberated from my fear of accidentally eating a chicken foot, I found myself again filled with angst — angst that I couldn't find room to devour every last morsel.

But hey, that's the kind of problem I can get into solving. Dim sum, after all, really is a feast.

"We have five different chefs from five different areas of China," Li tells me. "And we have one chef who is dedicated exclusively to our dim sum service. It's his full-time job, all week. That's why there are only a few other restaurants besides us who do this every weekend. It's quite a production."

The entire time she is talking, I'm distracted by the soy- and ginger-glazed spare ribs across the table. As she's finishing up her thought on how much work goes into preparing such a bounty, I interject a question about whether it's correct to pick them apart with my hand.

"You need to get out of that mindset," Li assures me. "Just go and do it and enjoy."