PHOTO BY MABEL SUEN Dim sum has become the brunch of choice for adventurous eaters and homesick college kids alike.

Julia Li understands the intimidation first-timers might feel when they walk through the front doors of her family's restaurant, Lu Lu Seafood and Dim Sum. The array of food paraded out at a dim sum feast can overwhelm even the most seasoned veterans, the wait staff can seem gruff and the dishes contain flavors and textures that reside outside the comfort zone of the Western palate.

Still, she doesn't think that quite captures the disconnect.

"Eating in the West is a very individualistic experience," observes Li. "In the West, you have your own individual plate, isolated from everyone else's individual plates. You eat what's yours, they eat what's theirs, and that's a fine way to do it. You get to choose what you want and have control over your meal. This is one of the most difficult things for people of Asian cultures when they come to the United States. It's such a different way of eating." Dim sum thrusts the diner into a more communal way of doing things — what Li describes as the Asian way. 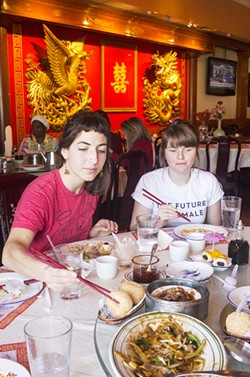 Li pauses to pluck a piece of eggplant, slicked with oyster sauce and wrapped around balls of ground shrimp, from one of the seemingly infinite number of small plates scattered atop our table. It's late in the morning on a Saturday, but Lu Lu has an atmosphere more akin to a raucous happy hour than a sleepy weekend brunch. No-nonsense servers clamor around the room with urgency, pushing metal carts and pausing at each table to offer their wares. Whole families crowd large round tables, millennials hungry to try something new pack the sizable room, and international students — many of whom have carpooled to Lu Lu with strangers, Li notes — decompress after a tough week hitting the books.

Li places the eggplant squarely on my plate and insists I must try it. "Do you like tendon?" she asks. It's not really a question. A strip of prosciutto-thin meat, spiked with chilis, appears on my plate before I can give her an answer. Next to it, she places a shrimp dumpling and some pea shoot tips and a triangle-shaped slice of scallion pancake.

"In Asian culture, eating is a communal experience," Li continues as she piles food on my plate. "It's very different than how you eat in the West. There isn't really that ownership over your plate. You may have given up your power to choose, but there is a communal factor to it that allows you to try a lot of different things. I think the way we order and eat food is reflective of our different cultures. ... It's a very lonely experience to eat by yourself." 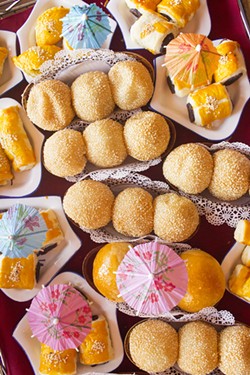 At this point, having not yet touched a single thing besides my teacup and napkin, I am indeed angst-ridden, but it has nothing to do with loneliness. I'm overwhelmed. No less than six different items compete for real estate on my tiny side plate. Our table is covered in small white dishes, to the point that you can't see the black tabletop underneath; we've resorted to using the windowsill for overflow space. I'm hungry, for sure, but consuming everything before us seems like an impossible feat.

But that's not what's really distressing me. I'm more worried that I am about to be revealed as an imposter.

Yes, I'm a food critic, but like many a lower-middle-class Midwesterner, my experience of Asian food growing up was limited to the chicken fried rice I'd grab on my way to work at my high school job at K-Mart. International food, in my house, meant "Italian" (read: spaghetti and tomato sauce from a jar) or tacos from an Old El Paso box kit.

It wasn't until college that my culinary horizons expanded. A job in a fine-dining restaurant and a boyfriend who'd emigrated from Korea when he was a kid helped me see the world beyond Western cuisine. Kimchi and kabobs, curries and pho all awakened my palate. Still, if someone suggested weekend brunch, my mind instantly went toward eggs, smoked salmon and a roast beef carving station.

That dim sum remains elusive to me has less to do with its accessibility and more to do with my fear of being outed for such a lack of experience. As someone who makes a living telling others what to think about food, the fact that there is such a gap in my knowledge is just embarrassing — and, like a not-yet literate kid who suffers through class, terrified of being called upon, it's something I've taken pains to cover up. The critic has no clothes.

The urgency to familiarize myself with dim sum — the reason I've called upon Li to serve as my interlocutor — is born of both interest and necessity. Since making its way to the U.S. via Hong Kong, this Chinese tradition evolved from a meal for homesick expats to an "exotic" alternative for adventurous trendsetters to, well, brunch. These days, going out for dim sum isn't just for those born into the tradition and those daring enough to fake it. It's the "it" weekend pastime for anyone with even a passing interest in international cuisine — and for any food lover who wants to kick things up a notch.

That's a development that Li has noticed over the years, and not just when it comes to dim sum offerings. Overall, she says, patrons have become more receptive to what is unfamiliar. "When we first started — our first restaurant was called Great Chef Garden — we could only do buffet because that's all people would eat," recalls Li. "We would serve a lot of Americanized stuff, but also authentic food as well."

Sixteen years ago, Li's family moved their restaurant to its current location on Olive in University City, and they have been doing dim sum ever since, at first for their Chinese clientele, then for curious locals from around the area. Those people still come to Lu Lu, though these days, it's a younger crowd packing the place. "I think people are just more open to trying things," says Li.

No matter how open they are to the experience, Li still recognizes a common apprehension overcome first-timers. It's something she wants to address.

"You can tell that people who are here for the first time are intimidated to walk in the front doors," Li says, relishing the opportunity to welcome newcomers into the dim sum fold. "But I love when people can think forward and walk through that door. It's not about things being wrong or right; it's about playing around with what fits."