No matter the size of your sweet tooth, it's impossible to walk into Destination Cafe without being instantly mesmerized by the pastry display. Inside the glass-fronted case, gorgeous cakes and confections beckon: Brownies, cupcakes, cookies and a gorgeous, sprinkle-covered pink birthday cake are so enticing it's a small miracle if you can resist eating dessert first.

It's no wonder that this Tower Grove South restaurant leads with sweets. Since 2012, the people behind Destination Cafe have been running its sister concept, the Destination Desserts food truck, as a roving pastry shop, garnering a loyal following for sweet creations that are as visually stunning as they are delicious.

Destination Desserts' move into the full-service restaurant business represents much more than an expansion of its food offerings, however. Operated by the Center for Head Injury Services, both the dessert truck and the four-month-old Destination Cafe are nonprofit social enterprises, created to provide employment training and job opportunities for individuals with brain injuries, autism and developmental disabilities. With the restaurant, the center aims to give its clients another option for work — something that, historically, has been lacking for those with brain injuries and neurological disorders.

The center's foray into the food business began about eight years ago when it received a grant from the rehabilitation nonprofit Kessler Foundation. The New Jersey-based organization was looking for creative ways to improve employment opportunities for people with brain injuries, and they were intrigued with the center's idea to start a bakery food truck that would use an integrated model of vocational training in which program clients work alongside industry professionals without brain injuries. The idea for the integrated environment, as opposed to a sheltered workshop, is that it would give participants real-world experience that they could then apply once they graduated from the program.

The truck was a huge success, but the center soon found out that it was not the best fit for all of its clients. To expand its services to those who needed a less arduous work environment, the organization founded the all-natural dog treat bakery Wags in a Bag. With only five recipes and a bit more wiggle room for making mistakes, the pet concept allowed even more people, with more diverse needs, to be involved in the program.

Though the center did a good job serving those clients who could easily access it, leaders at the organization, including executive director Donna Gunning, felt that those who had needs in the city of St. Louis were being left behind. City residents were welcome to participate in the center's programs; however, doing so required lengthy bus rides to its facilities in the county. To solve this issue, Gunning and her cohort partnered with the St. Louis Office for Developmental Disability Resources to purchase a building on the corner of Morganford Road and Juniata Street in Tower Grove South that would build upon the Destination Desserts model. 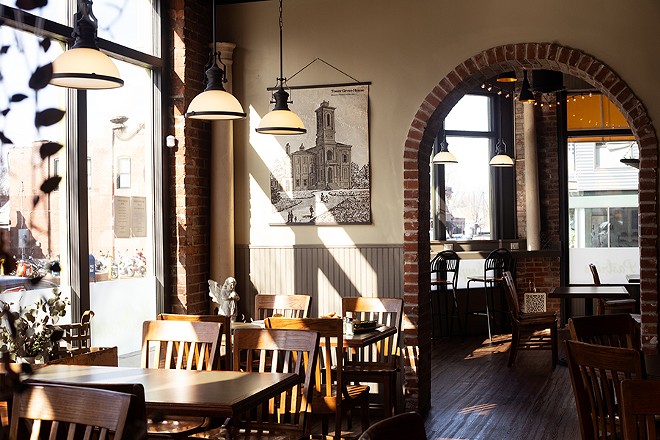 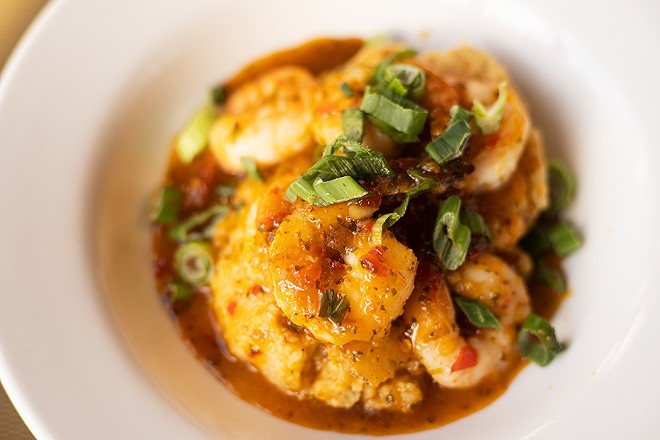 Helmed by executive chef Thomas Hayes, Destination Cafe's food takes inspiration from its name, offering a menu of globally inspired dishes that allow for both creativity and a wide range of culinary styles to round out program participants' culinary repertoires. Bangkok Shrimp, for instance, features the plump shellfish atop creamy grits; the Thai chile glaze that coats the shrimp soaks into the grits like a sweet and spicy gravy.

Destination Cafe excels with its flatbreads thanks to a buttery, golden crust that is crispy around the edges and pillow-soft near the center. The mushroom version is particularly noteworthy; roasted mushrooms and caramelized onions are set in a rich concoction of molten mozzarella and tangy goat cheese.

A generous plate of poutine features black-peppery-battered fries smothered in rich, herb-kissed brown gravy. Rustic chopped scallions add a pop of zest that cuts through the decadence. The Southern Fried Chicken Tenders are another worthy appetizer. Usually a throwaway dish pulled out of the freezer to appease diners under eight, Destination Cafe's tenders are juicy and hand-breaded in a shockingly crispy batter that tastes of rosemary, black pepper and thyme. Not surprisingly, my daughter ordered them for her entree; the surprising part is that I couldn't stop grazing off her plate.

Destination Cafe offers several sandwiches, including two wonderful burgers. The more traditional of the two, the Butter Burger, is a thick patty seasoned with a garlicky, almost Cajun-seasoned butter. Crisp lettuce, thick-sliced tomatoes and bread-and-butter pickles add refreshment that cuts through the meat's juices. It's a quintessential, thick-patty-style burger, but the kitchen gets bonus points for hitting a flawless medium temperature better than anyone else in town.

I was also impressed with the Gyro Burger, a blend of Greek-seasoned lamb and ground beef covered in molten goat cheese, red onion, lettuce, tomato and creamy tzatziki. It's a delightful fusion of genres that gives you the distinct flavor of a gyro with the satisfaction of biting into a juicy burger.

Of the entrees, the most memorable is the New Orleans Shrimp. Like the Bangkok Shrimp appetizer, the shellfish are served atop grits, but here, they are covered in deeply savory Cajun butter and accented with andouille sausage and bell peppers. I preferred this warm spiced dish to the chicken and dumplings; though I liked the creamy chicken gravy and generous portion of carrots and zucchini, the rosemary-potato dumplings were denser and too herbed for my traditionalist liking. 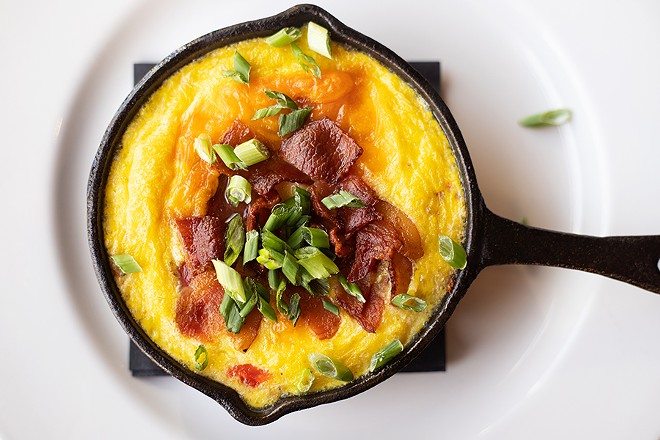 Destination Cafe's brunch is its strongest service. French toast is a perfectly executed version of the classic: The thick bread soaks in the egg and cream mixture, which makes the center custard-like while the edges are crisp and golden. A cast-iron skillet frittata starts with a layer of hash browns, then covers them with red peppers, caramelized onions, bacon and cheddar cheese-infused eggs. The biggest surprise, however, was the Breakfast Flatbread. An excellent sausage gravy base serves as a canvas for bacon, cheddar cheese, fluffy scrambled eggs and scallions. Many have tried the breakfast pizza idea; this is the place that succeeds. 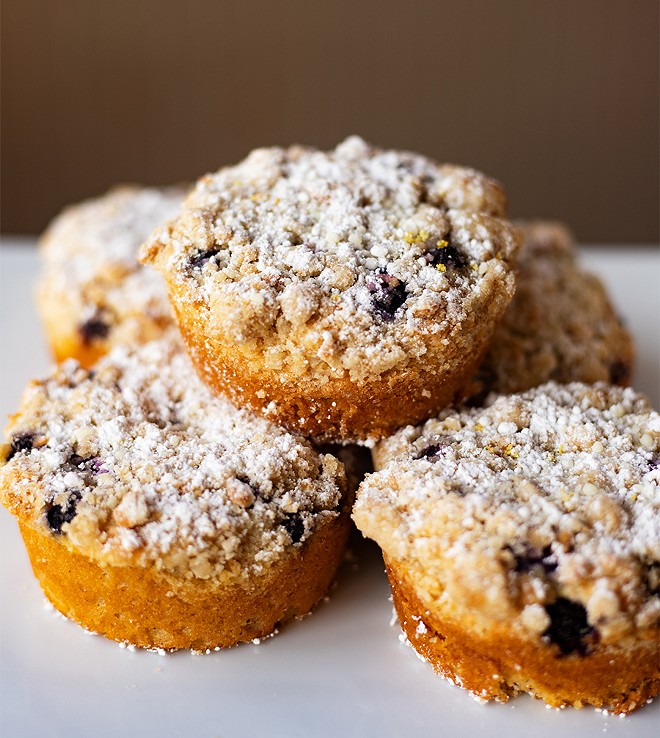 No matter how full you might be from brunch, that dessert case near the restaurant's entrance cannot be ignored. However, the pastries on display — cupcakes topped with luscious buttercream, a lemon-scented blueberry coffeecake encrusted in sugar, a rich German chocolate brownie — are only the tip of the restaurant's sweet offerings. A lava cake, small in size but mighty in dark chocolate flavor, has the glorious decadence of eating warm brownie batter. The signature dessert, however, is the skillet chocolate-chip cookie that is like a cross between a blondie and a cookie cake. Served warmed in a cast-iron skillet, the interior is soft like cookie dough while the edges crisp up golden brown. 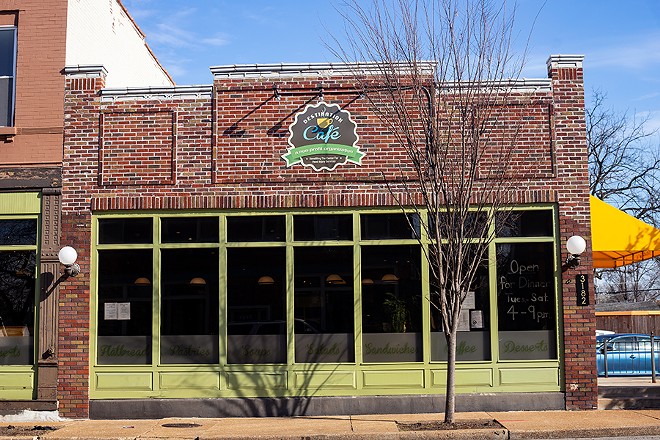 The skillet cookie is enjoyable on its own; eating it with the knowledge that you are giving people opportunities where few existed before is more than a bonus. It's the icing on the cake.