It's breezy and affable without ever going completely soft. 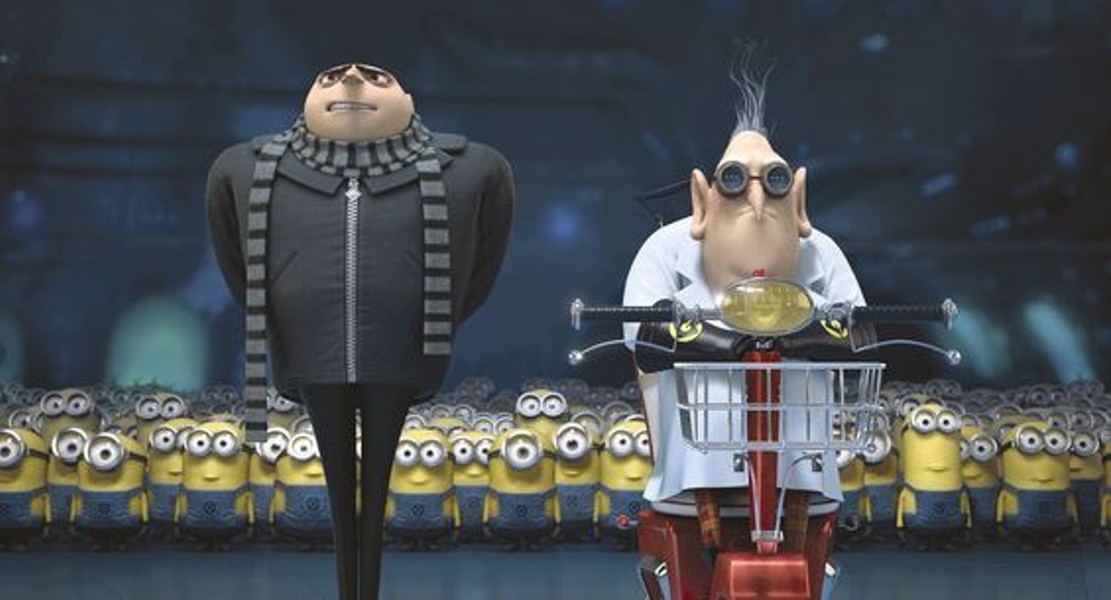 Admit it: Redemption is boring. We think we want characters to "grow" and "change," but really, it's the people around us in real life—people who, say, loudly pick their teeth in restaurants, or walk too slowly in public thoroughfares—who need revamping. (We ourselves, of course, need no improvement.) There's a liberating joy in watching fictional characters be as bad as they want to be, which was one of the open secrets powering Pierre Coffin and Chris Renaud's jubilant, indecorous 2010 animated feature Despicable Me, in which a potbellied misanthrope named Gru (voiced by Steve Carell) procured a shrink ray as part of his evil plan to steal the moon.

Gru also ended up adopting a trio of cute orphans, which is pretty much the beginning of the end for any world-class villain. Despicable Me, released by Universal, was close to perfect, especially compared with the alleged masterpieces of the almighty Pixar: For years, that studio coasted on its reputation for putting out costly, elaborate constructions like Up and WALL-E that tugged at audience's hearts, shamelessly but stealthily. And while Pixar has made a few terrific pictures—namely, the Brad Bird–directed Ratatouille and The Incredibles—Despicable Me was so unrepentant in its lack of moral virtue, and so much fun, that it seemed to have opened up a new world. It was so good, in fact, that making a sequel sounded like a terrible idea: Now that Gru is a dad, does he have to be a nice guy? The sort who'd never steal, let alone shrink, the moon? Where's the fun in that?

But Despicable Me 2 remains resolutely unshrunk. It's breezy and affable without ever going completely soft. That becomes clear early on when Gru, after staging a backyard birthday party for the youngest of his three little "gorltz," blasts an annoying neighbor with a garden hose. In his unidentifiable accent—half borscht, half Borscht Belt—he offers the ultimate unapologetic apology: "I'm so sorry, I did not see you there."

The kids have made Gru kinder in some ways but also less willing to put up with BS—it's all well and good to wax poetic about how raising children makes you a better person, but Despicable Me 2 reminds us that parenthood isn't for sissies. And Gru is most definitely not a sissy. This time around, he's tough enough to don a fairy costume so as not to disappoint the birthday girl; he joins an outfit called the Anti-Villain League, which roots out bad guys at (where else?) the local mall; and he even meets his match in the form of a willowy redheaded AVL colleague known as Lucy (Kristen Wiig). Villainy, it seems, is much easier than navigating the shoals of love.

There are so many ways Despicable Me 2 could have gone wrong, and so many things it does right. Working from a script by Ken Daurio and Cinco Paul (who also wrote the first film), directors Coffin and Renaud take great care with the pacing. The opening, in which an Arctic Circle research facility is whisked off into the sky, is extravagant in a James Bond way. And the finale is suitably action-packed, though nervous parents can rest assured that the weapons used here squirt nothing but jelly. (That doesn't stop Gru from pulling off a John Woo–style double-jelly-gun maneuver.)

In between, Coffin and Renaud keep everything blessedly low-key, proving that you don't need an antic plot when your characters are well drawn to begin with. Lucy, the love interest, is the best kind of animated screwball heroine: With her rubbery limbs, she has an ostrich ballerina's grace, but she can look after herself, too—she comes armed with a lipstick Taser and doesn't think twice about using it. And Gru, wearing his usual uniform of black drainpipe trousers, Beatle boots, and Euro-groovy zip-up jacket—he's shaped like a hipster Monsieur Hulot—reaches new heights of grousing and English-mangling, some of them marvelously lowbrow. He can't resist a jab or two at the expense of Silas Ramsbottom, an uptight English AVL bigwig (voiced by Steve Coogan). And come on—you wouldn't be able to, either.

Best of all, Despicable Me 2 devises an expanded role for the Minions, those capsule-shaped, overall-wearing underlings—many graced with two googly eyes, some making do with only one—who happily do Gru's bidding. In Despicable Me 2, the Minions, as part of a dastardly plot, are kidnapped and brought to a tropical resort, where they slurp cocktails, wear headdresses made of fruit, and hula to Mungo Jerry tunes all day. This vision is exhilarating, nutty, and not for the over-caffeinated. In fact, the dangerous influence of Despicable Me 2 became apparent at the screening I attended, populated largely by kids. As the lights came up, bunches of them were still whooping it up, jiggling their way toward the exits in a kind of mindless Brownian movement, chattering at one another in mock Minion-ese. Despicable Me 2 sets a very bad example for otherwise perfectly well-behaved children. That's just one more reason to love it.

Despicable Me 2 is not showing in any theaters in the area.