Your first clue that BEAST Butcher & Block's brunch is like no other — besides the flaming hearth and hog head hanging over the carving station — is the porchetta. Granted, there are other restaurants in town that serve this Italian pork-on-pork wonder, but the fact that it is sliced to order for an all-you-can-eat buffet makes you realize how serious pitmaster David Sandusky is about brunch.

He's dead serious, serving up porchetta that makes you want to go back for seconds, thirds and fourths, even as your body screams uncle. How could you stay away when such beauty beckons? The pork belly exterior, crisped up like a porcine potato chip on the outside, luscious and fatty underneath, is rolled around a succulent pork loin that's accented with herbs and even more fat. As the meat is sliced, it jiggles and glistens, dripping its juices onto your waiting plate. It's so tender, you could butter your biscuit with it, a challenge that you can actually attempt considering a pan of executive chef Ryan McDonald's fluffy biscuits are just about five feet away. 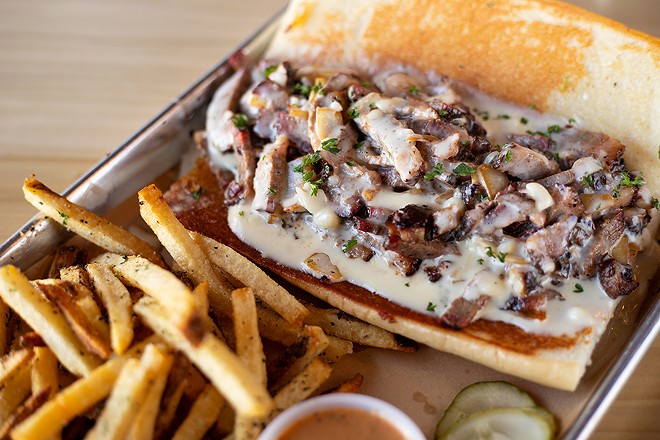 Tasting that porchetta, you understand why fans of the five-year-old Belleville, Illinois, smokehouse BEAST Craft BBQ Co. have been begging Sandusky and his wife, Meggan, to open a location on this side of the river. Those prayers were finally answered this past June when the husband-and-wife team launched their sophomore effort, BEAST Butcher & Block, in the Grove. For the new place, they brought with them all of their greatest hits: their fork-tender Wagyu brisket, succulent Compart Farm pulled pork, beer cheesesteak, mac 'n' cheese, Brussels sprouts and that mind-blowing pork steak. However, as their regular customers would soon find out, they had much bigger plans. 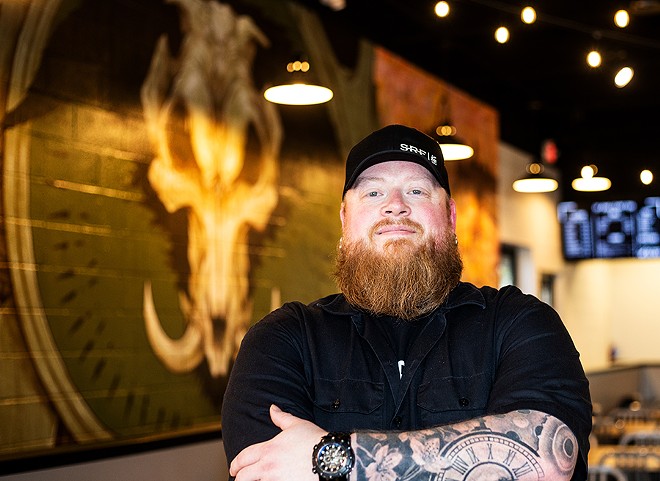 For the Sanduskys, who have made it their mission to push the idea of what barbecue can be, opening a BEAST 2.0 was not enough. They saw the Grove spot as more of a testing ground than a smokehouse — a place where they could serve what was expected, then offer their diners more. As a result, BEAST Butcher & Block is more of a barbecue complex than a mere restaurant, consisting of the smokehouse, a butchery and shop selling prepared foods. It also features a private space called the Skullery, which is where Sandusky and his team really get to play. 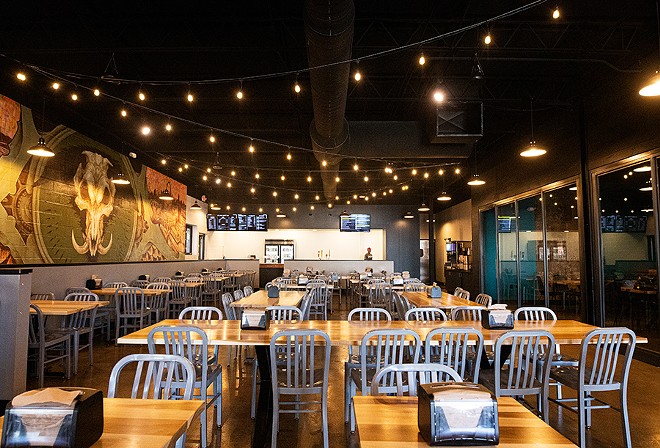 If this sounds like a massive operation, it is. BEAST Butcher & Block sits in the heart of the Grove, but, unlike the neighborhood's other businesses, it's far enough back from Manchester to give it a unique feel. The squat, mid-century modern building is fronted by a soaring, wooden slat structure that partially shades the patio. Inside, the room opens up to a traditional fast-casual smokehouse with a large open dining room and order counter.

Here, the Sanduskys serve BEAST favorites such as the mouthwatering pulled pork, a juicy, smoke-kissed mound of meat, so soaked in its own juices it makes sauce irrelevant. Equally dazzling, the basted pork belly is as soft as tempered butter, if tempered butter were a magnificently porky wonder with caramelized edges and concentrated flavor.

As is the case at the Belleville BEAST, Sandusky's brisket is positively outstanding. A contender for the best brisket in town, the beef is pull-apart tender, barely held together by a strip of buttery-soft fat and charred exterior. Tucked into a warm, flour tortilla, with a side of impossibly creamy mac 'n' cheese, it's pure barbecue joy.

The pork steak is yet another instance where the Sanduskys prove the new place is every bit as good as the original. The mammoth hunk of pork is so tender, it falls apart with just the suggestion of a fork tug. There is no need for Maull's here; the meat glistens with its drippings, the pork's natural sweetness shining as brightly as the smoke. This is the dish that made BEAST a household name, and it continues to be the smokehouse's highlight. 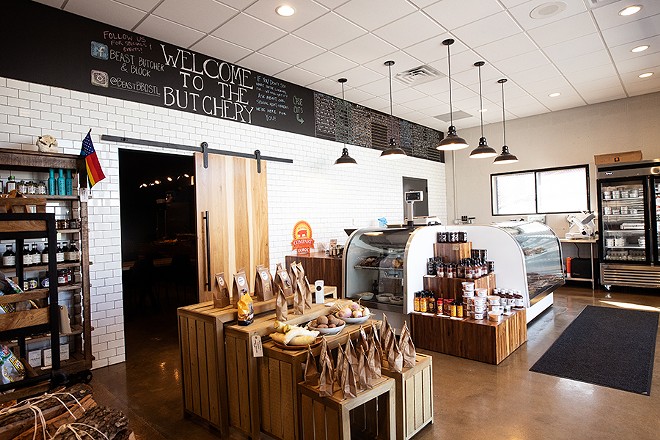 Yet this is where the similarities to the flagship location end. To the right of the dining room sits BEAST Butcher & Block's glass-enclosed private dining area, the Skullery, which serves as a combination show kitchen, events space and chef's table where Sandusky, McDonald and their team use a Grillworks live-fire cooking setup to play around with different ideas. Most of the experimentation so far has consisted of weekend tasting menus led by McDonald, who uses the live-fire grill as a source of inspiration for seasonally influenced prix fixe dinners.

On a recent evening, this consisted of an eight-course meal that began with a welcome snack of paper-thin house-cured coppa wrapped around dressed greens with the texture of flower petals. McDonald followed with an eclectic progression of dishes including a delicate acorn consommé accented with crisp pepitas, a shockingly fresh hamachi crudo, a pressed chicken "terrine" served alongside verdant green mole and an outstanding mezzaluna (half-moon) pasta filled with beef. 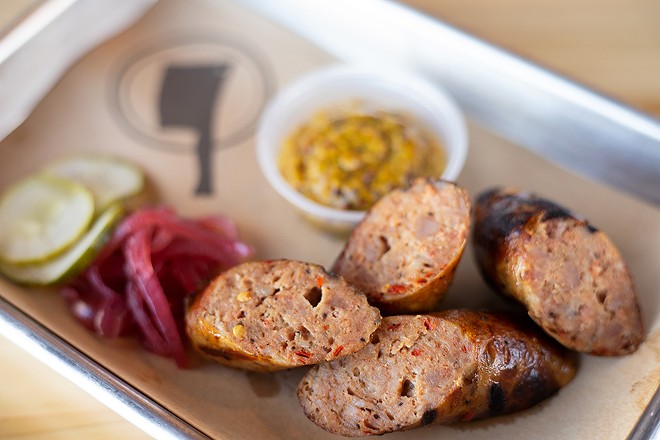 Overall, the dishes were well executed, but there are two that I cannot stop thinking about. The first is an outstanding housemade andouille sausage served with kimchi collard greens. The sausage, rustically ground, was breathtakingly hot, but the little flecks of fat mitigated the heat. I worried that the kimchi would exacerbate the chiles in the sausage, but instead, the greens had the sweetness you'd expect from traditional Southern collards, which tempered the spice. It was flawless, as was the evening's star plate, a beef-fat-fried sunchoke. Inside, it tasted like the creamiest potato you've ever eaten; on the outside, the savory tallow crisped up on the sunchoke's flesh, forming a decadent coating. McDonald upped the ante, shaving foie gras atop the root vegetable to underscore the richness. I can only hope this dish will make a regular appearance on future menus.

I appreciated the tasting menus, though Sandusky and McDonald have a chance to do even better. St. Louis is currently blessed with several chef's table options; the ones that are the most successful are those that have a distinct point of view that lends a cohesion to the experience. BEAST has a unique identity as the place in town to really think outside the box about barbecue. There were elements of this in the experience, but I'm not sure that the menus so far, while tasty, have fully embraced that. It's an opportunity I hope they will seize moving forward.

In terms of brunch, however, BEAST Butcher & Block has peaked at the highest mountain top. There is no improving upon that porchetta — that is, unless you pair it with the restaurant's brisket, perfectly cooked hot-smoked salmon and shockingly juicy turkey. And that hog head is not merely a decoration. Sandusky and company will slice you a piece of the jowl, typically reserved to make guanciale, that makes bacon seem lean and boring — unless it's BEAST's bacon, which is, hands down, the most marvelous example of the form I've ever tasted. That you can eat all of this, and a made-to-order omelet, and McDonald's biscuits, and the restaurant's signature Brussels sprouts and about 30 other things makes it the brunch to end all brunches. That there is not a line out the door every Sunday morning is shocking. There will be.

The Sanduskys are used to such lines. After all, the popularity of their Belleville smokehouse is what prompted them to open BEAST Butcher & Block in the first place. How they've been able to match that level of perfection is an impressive feat — one almost as impossible as saying no to that fifth slice of porchetta.