Dave Bailey’s Pop Takes the Extravagance, But Not the Fun, Out of Champagne

Were it not for a reality show, Dave Bailey would have opened Pop two years ago. After all, he'd been sketching out the plans for such a sparkling wine-centric restaurant for the past fifteen years. All he needed was the right space, and he had just that when he moved his popular Lafayette Square dessert spot, Bailey's Chocolate Bar, into the building's upstairs lounge in the summer of 2017, thus clearing the way for a new restaurant to take its place.

However, Pop would have to wait when Bailey and his wife, Kara, signed on to do a reality television show centered around a different theme for a restaurant. Though it was the Baileys' business and reputation on the line, the producers of the show all but dictated what the new concept would be, giving the couple strict parameters about what they could and couldn't do. The result was what Bailey describes as the reverse-engineered L'Acadiane, a Cajun- and Creole-inflected restaurant that looked good on paper but failed to capture his heart.

It also failed to capture the producers' imaginations. The pilot never aired, leaving the Baileys not only disappointed, but with a restaurant they never really wanted. Though they committed to operating L'Acadiane to the best of their abilities, the restaurant never really meshed with the Baileys' other concepts. After two years, they knew that something had to change.

That change would come in a dramatic fashion when, during an invitation-only dinner at L'Acadiane in January, the Baileys and their team converted the restaurant into Pop. The transformation was a complete surprise to everyone in attendance and took place, step by step, right before their eyes. First, the flatware and glassware were replaced; then the tables' centerpieces. After a few courses of these subtle changes, the music was swapped out, servers shed their old uniforms for new ones and the L'Acadiene decal was scraped off the window while Dave Bailey told the story of how he and Kara came to love bubbles. For the final act, the staff pulled down curtains that had been placed around the restaurant, a big reveal that officially changed L'Acadiene to Pop.

If L'Acadiene failed to capture Bailey's heart, Pop is where he wears his heart on his sleeve. The restaurant is he and his wife's love song to the bubbles they've been sharing together since the beginning of their courtship many years ago. You feel their joyful energy the moment you walk into the restaurant; both the front and back rooms positively sparkle as candlelight bounces off the glassware that adorns the tables. Lovely rose-gold-hued floral wallpaper is warmly modern and pretty, an aesthetic that matches the tufted banquettes and plush, pastel-colored pillows that decorate the space.

Equally stunning is the outdoor dining area, a New Orleans-style courtyard that's a lush, garden-like oasis from bustling Lafayette Square just out front of the building. Bailey insists that bubbles can be an everyday occurrence — not something reserved for special occasions. Sitting on that gorgeous patio on an early summer weekday evening, you understand that sentiment.

Bailey knows, however, that convincing diners to accept Champagne as an everyday beverage is a tough sell. For that reason, he and his culinary team have gone out of their way to craft an approachable menu that caters to people looking for a quick bite to eat as well as those looking for a celebratory night out. Guests wanting a glass of sparkling wine and something to snack on can opt for something as simple as Pop's outstanding deviled eggs, a perfect rendition of the ubiquitous appetizer. Though hard-boiled, the egg whites are cooked flawlessly so that they seem suspended between solid and liquid. The mustard-heavy yolk filling approaches the texture of custard and is so bright it makes the mouth dance. A small dollop of caviar garnishes the dish, giving it a briny pop of texture that is tailor-made to go with a sparkling beverage.

Ahi tuna tacos are another wonderful light option. The ruby-red fish is blackened, seared rare and sliced into thin rectangles so that each bite picks up the Cajun spice blend that coats the exterior. Orange, avocados and pickled red peppers energize the dish, and a rich peanut sauce provides a wonderful, salty contrast. In place of a tortilla, a paper-thin slice of jicama serves as the taco's base and wraps the elements in a refreshing crunch.

Popovers, served with wonderful thyme butter, are deliciously eggy though a touch on the dense side. I preferred to spend my day's carb allotment on the poutine, a bed of shoestring-thin fries smothered in molten cheddar cheese and velvety "red gravy," a creamy sauce infused with piquant red pepper. Generous-sized cubes of bacon were sprinkled atop the cheesy gravy concoction, turning the dish into an haute riff on a potato skin. 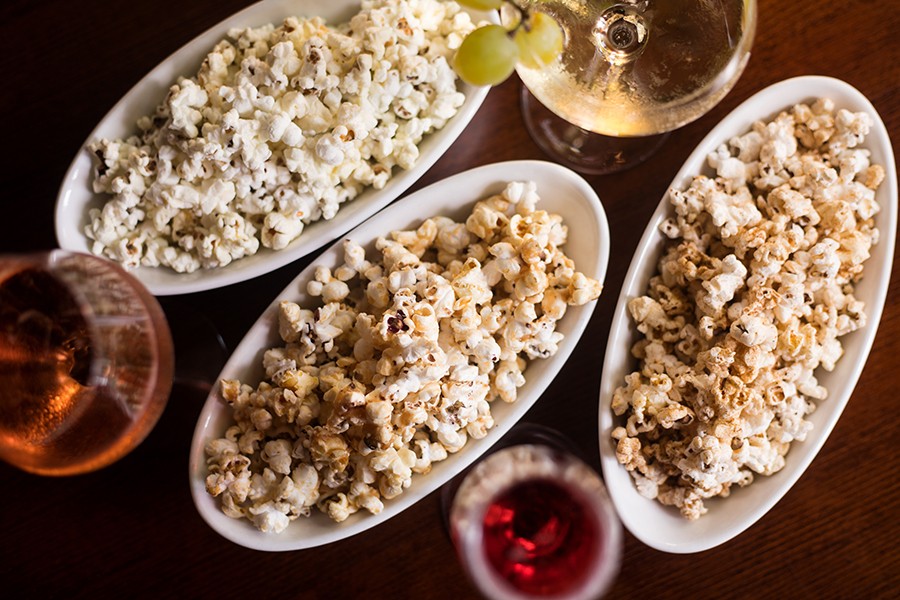 If Bailey feels his calling was to open a bubbles-themed restaurant, his second calling should be to run a fried chicken joint. Pop's chicken skewers are evidence of his and his chef's proficiency in the genre. Succulent hunks of pickled dark meat are coated in flaky, black pepper-flecked batter and fried to a golden crisp. The meat is placed on a skewer with poblanos, onions and red peppers, then drizzled with a creamy sauce akin to a remoulade. The generous dish may be billed as a snack, but it's so wonderful, you'll be tempted to make your entire meal out of it.

The "Market Board" is another success thanks to its main attraction: vibrant red slices of beet-cured salmon. The beet's earthy flavor infuses the rich fish, giving it an added dimension without taking over. Simply paired with pickled shallots, horseradish cream, capers and hard-boiled egg, the board is as visually stunning as it is tasty.

Entrees at Pop follow the New American bistro playbook with dishes such as scallops, which are flawlessly seared and placed atop a rustic beet hash. A delicate buerre blanc sauce is drizzled over the scallops, underscoring their buttery flesh.

A chicken breast, served skin-on, was a bit overcooked on the inside, but its gorgeous, mouthwateringly seasoned browned skin made that point an afterthought. A lemon- and sage-fortified pan jus married with buerre blanc to form a rich, buttery gravy that coated the chicken and accompanying zucchini hash.

Salmon was also overdone to my preference, but the wonderful sweet soy glaze that gilded the fish made up for this misstep. Al dente green beans, accented with pickled shallots and tomatoes cooked to the point that they burst when pierced, made for a simple yet bright accompaniment.

Pop boldly leans away from the expected burger template in the form of a thick, rustically ground flap steak. The meat, spiced with coarsely ground black pepper, is juicy; the rendered fat and jus soaks into the buttery challah bun like a French dip sandwich. Sharp horseradish cream, pickled radishes and micro daikon finish this sophisticated take on a traditionally casual offering.

Far and away, Pop's culinary scene stealer is the duck, a gorgeous, chili-cured breast seared medium rare. The succulent meat is warmed by the chili spice — it gives a back of the throat heat that is countered by jammy dark cherry chutney and sweet onion jam. Champagne-dressed arugula adds a tart, peppery punch, adding one more element to a dish that is positively electrifying.

Pop does not offer desserts but invites guests to head upstairs to Bailey's Chocolate Bar for sweet treats beyond the cocktails it offers. After that duck, however, it's hard to imagine you could want for anything more. It may have been a dish fifteen years in the making, but, like Pop overall, it was clearly worth the wait.