Could This Be a Nacho? Loaded Answers the Question

For the past five years, Brandon Holzhueter and Brad Merten have been approaching just about every dish they encounter with one simple question: Can this be turned into a nacho?

It sounds like a fun, culinary thought experiment — and in some ways, it started out that way. In 2016, when Holzhueter and Merten were thinking about adding food service to their adult frozen drink spot, Narwhal's Crafted, they kept coming back to the idea of nachos. From a logistics standpoint, it made sense. Their setup at Narwhal's involved low chairs and couches, so handheld dishes would be much easier to eat than knife-and-fork entrees. Plus, they wanted something shareable and lighthearted to match the spirit of their bar. Nachos ticked every box for them, but they didn't want to just do any old tortilla-chip-based dish. Just like at Narwhal's, where they made a point to elevate the idea of frozen drinks beyond the pre-mixed piña colada, they knew they could do the same for nachos, and set out to come up with recipes that would make people rethink the dish as more than ballpark food.

As much as they loved the idea, they realized pretty quickly that Narwhal's just wasn't set up to do food and tabled the idea for another day. That time came a couple of years ago, when they began thinking about franchising Narwhal's out of state. In looking into liquor license requirements, they found out that it was financially impossible to get one as a standalone bar, but having a food-service element completely changed the picture. Again, they came back to nachos as what they wanted to do, but ultimately decided they just weren't quite ready to take the leap.

Not long after that came talks with City Foundry STL, where they entertained the idea of launching their nacho concept as a standalone shop. Holzhueter and Merten went all-in, working out recipes and even bringing on a chef consultant to help them finalize dishes and write a menu. Ultimately, they decided the arrangement with City Foundry was not the right fit, but they'd gone so far in giving life to their vision that they knew there was no turning back.

Late last year, Holzhueter and Merten realized that the empty storefront adjacent to their St. Charles Narwhal's location was the perfect opportunity to try out their idea once and for all. Though the setup would allow the two concepts to operate separately, being connected meant that guests could patronize both establishments seamlessly, ordering food on the Narwhal's side and drinks on the restaurant side. With that ease of experience in mind, they took over the space, worked out the branding, brought on chef Daniel Sammons (formerly of Polite Society) to guide the culinary side of the operation, and opened Loaded this past February. 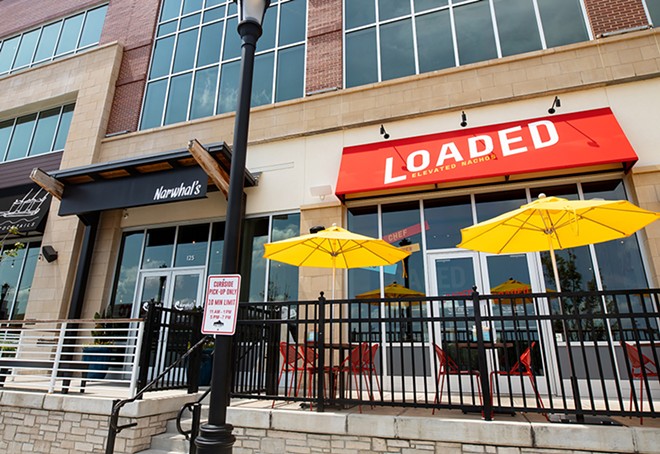 The moment you dig into one of Loaded's absolutely outstanding dishes, you understand why they just couldn't let the idea go. Though a restaurant built entirely around nachos might sound gimmicky, Holzhueter, Merten and Sammons have nailed the tone thanks to thoughtful offerings created with the same level of care you'd find in an upscale dining establishment. While the setup is fast casual and all dishes are prepared to order in front of you, this is not mere steam-table grub. Sammons and his crew prepare everything from scratch, from succulent meats to rich sauces to ultra-fresh accoutrements, making this one of the more surprising restaurants to open in recent memory.

Consider the toasted ravioli. If you think you've had every variety of the St. Louis classic, Loaded will make you feel as if you are tasting it for the first time. For this deconstructed version, breaded pasta chips serve as the base for a thick Bolognese-style pork ragu. A dollop of luscious herbed ricotta and a sprinkle of shaved parmesan cheese finish a dish that is so perfect, you'll wonder why t-ravs ever took any other form.

In a similar vein, the crab Rangoon nachos completely shatter your notion of the ubiquitous appetizer. Here, Sammons and company pile large hunks of marinated crabmeat onto crispy wonton chips, then garnish the meat with cream cheese and sweet chili sauces, as well as black sesame seeds and chives. Unlike the traditional form, Loaded's version puts the crabmeat front and center, which is a welcome change.

For the buffalo chicken nachos, Sammons smartly uses pulled chicken thighs; the tender, juicy meat is tossed in a fiery bourbon buffalo sauce and dressed with ranch dressing, cherry tomatoes, celery, green onions and crumbles of blue cheese, then placed atop a bed of potato chips. It's positively addicting, as are the gyro nachos, which reinvent the classic preparation by layering the beef and lamb gyro meat and traditional condiments onto tortilla chips. Spiced and toasted garbanzo beans are a thoughtful addition, adding a pleasant, mild-spiced flavor and crispy texture.

In place of the standard hoagie bread, Loaded uses crispy potato chips for its version of the Philly cheesesteak. Velvety chipotle cheese is ladled over the chips, then piled with shaved beef, peppers, onions and mushrooms, which give the dish a wonderful earthy taste. The jerk chicken nachos are equally delicious with plantain and tortilla chips, spiced pulled chicken thigh, black beans, jerk crema and a stunning compressed pineapple salsa that beautifully balances the heat from the jerk seasoning with juicy sweetness.

Though Holzhueter and Merten wanted to make people rethink the nacho, they also felt that they needed to pay homage to a traditional version of the dish with the Ol' Standby, an outstanding take on classic bar nachos. Ground beef and chorizo, pico de gallo, pickled veggies and jalapeños are stacked atop tri-colored chips, then covered in creamy chipotle-cheddar cheese.

Loaded even serves desserts in nacho form. A take on the cannoli features cinnamon-sugar chips, sliced strawberries, chocolate-chip-laden mascarpone cheese, berry jam and orange zest. It's outrageously good, but you might not have room for dessert considering it is impossible to stop eating Loaded's banh mi nachos, which feature slow-cooked chili-ginger pork that's so juicy and flavorful you want to pull up a chair and eat it straight out of the steam table. Sambal agave sauce, sriracha aioli, pickled vegetables and fresh cilantro gild this masterpiece.

The banh mi shows that, just like Holzhueter and Merten knew from the start, there is no limit to what can be done in nacho form. They're even in talks with the folks at Mai Lee about figuring out a way to represent pho as a nacho; it seems like an impossible feat, but if Loaded has done anything — besides give us an outstanding new fast-casual concept — it's proven that if you can imagine it, you can do it.