The moment you walk into Cork n' Slice it hits you: the aroma of roasted garlic. But it's not just the room's pungent perfume that provides such a warm welcome. The restaurant's large brick oven sits at the end of a narrow walkway opposite the entrance. Next to the delicious smell, it's the first thing you notice when you enter, its vibrant orange flames licking vigorously around its interior like an inferno. You'll feel as if you've been wrapped in a fuzzy electric blanket before you've even sat down at the table.

You might be surprised to find out that such an inviting scene has been set by a first-time restaurateur. However, owner Cornell Thirdkill is no stranger to creating moods. Though he's new to the restaurant business, Thirdkill cut his teeth as a tour manager, a gig that took him around the world doing everything from managing a production team and handling budgets to making sure green rooms were properly stocked and artist riders accurately executed.

One of the biggest perks of the job was trying different foods. A self-described foodie, Thirdkill took every chance he got to experience the cuisines of the 30 or so countries he visited working as a concert manager. He would joke with his brother that one day, maybe when he was 50, he would leave the music business and open a restaurant of his own. 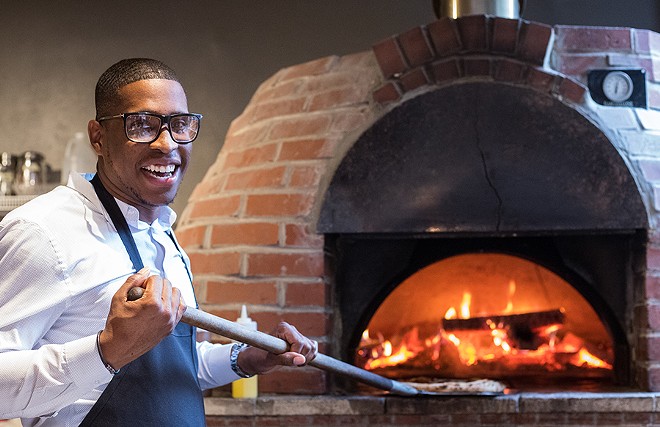 It happened twenty years early. After leaving the concert industry and settling back in his native St. Louis, Thirdkill obtained his real estate license with the goal of flipping properties. When an agent showed him an attractive property downtown, he decided not only to buy the building but to run it as a series of nightclubs and lounges. For three years, he ran these pop-up style events while increasingly feeling the pull to open a restaurant of his own. He tried on a few occasions to partner with people on different restaurant projects, but none of them stuck.

The right opportunity came after Pizzeria Mia closed in the Central West End. When Thirdkill's agent showed him the storefront, a lovely windowed space complete with a wood-fired pizza oven on the ground floor of an older apartment building, he was transported back to one of his favorite restaurants. Berri's Pizzeria in Los Angeles had always stuck with him because it represented all that a pizzeria could be — elegant but approachable, comforting yet unexpected enough to be interesting. Thinking about Berri's signature lobster pizza, he knew he'd found his spot.

Though the restaurant was basically turnkey, it took Thirdkill roughly a year and a half to translate his vision into reality. The majority of that time was spent trying to develop his menu. Thirdkill had ideas, but he wasn't a trained chef and ran into problems getting the flavors and recipes right. 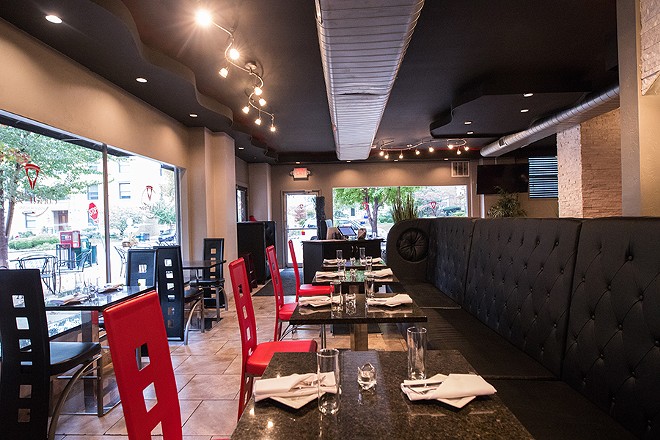 Increasingly frustrated, he mentioned his struggles to a friend, who introduced him to chef Kyle Parks. The industry veteran and L'Ecole Culinaire instructor loved Thirdkill's vision, and the pair immediately clicked as they worked together to perfect the concept and menu. In February, they felt comfortable they had it right and opened Cork n' Slice to the public.

Thirdkill has always been attracted to the fine-dining side of the restaurant business, and it shows in the aesthetic changes he's made to the space. Gone is Pizzeria Mia's neutral palette, replaced with a striking red, black and white color scheme that gives the room a dramatic modern feel. Walls have been painted candy-apple red, and a mix of red and black chairs and black leather banquettes provide seating. A three-dimensional, black-and-white photo of wine barrels aging in a cellar covers one of the walls and creates the illusion of additional space.

Such an upscale setting befits Cork n' Slice's refined approach to pizza. Taking Barri's lobster pizza as a jumping-off point, Thirdkill invites his guests to see his pizzas the same way you would a high-end entree — just one that happens to be served on chewy, wood-fired crust that is speckled with pleasantly bitter char.

The style is similar to Neapolitan — soft in the middle, puffed up and chewy around the edges — though Parks emphasizes that he is not chained to the parameters of that designation. His margherita evokes the classic version, but isn't a literal translation. The crust is covered in San Marzano tomatoes, ovals of fresh mozzarella and verdant basil leaves. However, Parks adds a balsamic drizzle and whole cherry tomatoes that roast in the oven to the point that they pop open when bitten. These elements add a bright, mouth-watering burst of tartness; they're a welcome addition.

On the "West End," luscious béchamel and molten fontina cheese are generously slathered over the pie, their creaminess punctuated by succulent chicken, bacon and funky blue cheese. Balsamic and pickled red onions cut through the richness, and fresh arugula — smartly added after the pizza comes out of the oven — adds a peppery bite. It's a wonderful Cobb salad in pizza form.

The heavenly smell of the "Hunting for Truffles" pizza is as alluring as Cork n' Slice's garlic perfume. Pungent truffle oil greets you before the pizza even arrives at the table; however, Parks hasn't overused the powerful oil, adding just a whisper to the béchamel-based pizza. It infuses the cream sauce, wild mushrooms, goat cheese and delicate prosciutto with delightful yet powerful funk, but it does not take over (a testament to his deft touch). And the prosciutto — finally, a pizzeria has managed to add the paper-thin pork to a pizza without overcooking it. Hallelujah.

Thirdkill and Parks try their hands at both jerk-seasoned and gyro pizza, with successful results. "What a Jerk" pairs the Caribbean seasoned chicken with jalapeños, peppers, onions and cilantro. Mango-pineapple relish cools down the pie's searing heat. I did find myself wishing there was more depth to the jerk seasoning, but the "My Big Fat Greek Pizza" proved perfect as is. Tzatziki subs in for traditional pizza sauce, and is covered in gyro meat and its traditional condiments. Green olives provide a wonderfully briny bite. 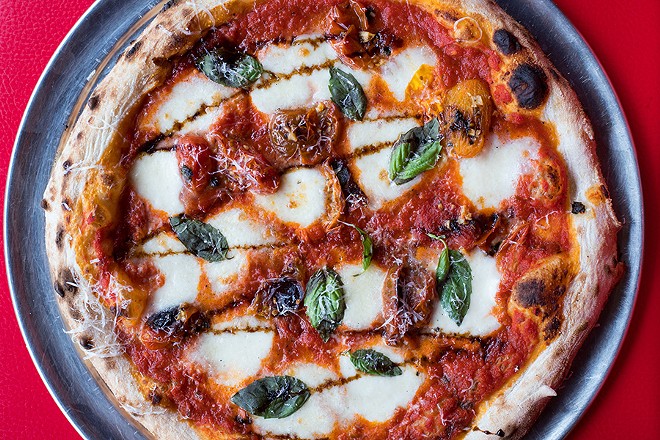 Cork n' Slice proves equally adept at something as simple as a cheese pizza. Here, however, it's whimsically called the "Kevin McCallister," a nod to Home Alone, and presents as a delectably gooey mix of cheese and tomato sauce. Mozzarella, fontina, smoked gouda and Parmesan combine with crushed San Marzano tomatoes, offering a layer of complexity beyond a single cheese blend, but not so much as to take away from a cheese pizza's simple comfort.

Of course, Cork n' Slice's pièce de résistance is its nod to what inspired this endeavor in the first place: the lobster-and-shrimp pizza. I'll admit I was skeptical; visions of rubbery frozen lobster covered in cheese nearly prevented me from ordering it. I will eat my words. Better yet, I'll eat this masterpiece. For the base, a creamy "rosé" sauce mimics the luxurious texture and subtle sweetness of lobster bisque. On top, tender lobster that has been poached in citrus and fresh herbs is paired with equally tender roasted shrimp. The shellfish is sprinkled with orange-tarragon gremolata, perfuming the pizza with bright, licorice refreshment. Were I served lobster and shrimp of this quality at a seafood restaurant, I'd be impressed. That such beautiful shellfish exists after being fired in a thousand-degree oven is simply mind-boggling and perfectly encapsulates Thirdkill's vision.

Though pizza is the star attraction at Cork n' Slice, the restaurant offers a handful of appetizers and salads. "Bánh Mì Tacos" feature fork-tender, if not a bit salty, hoisin-braised pork paired with fresh vegetables. White-bean hummus is a fun riff on the classic chickpea version, though it would benefit from some seasoning. A "Strawberries & Champagne" salad pairs arugula, sliced champagne-infused strawberries and red onion with a luscious wedge of mild blue cheese, walnuts and balsamic. 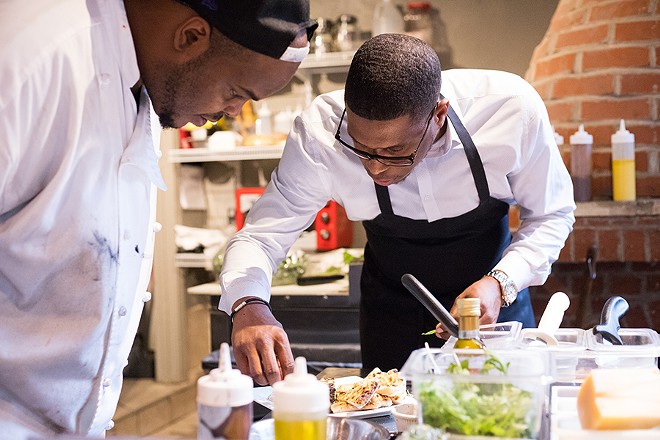 My favorite appetizer was the "Mamma Mia Meatballs," a perfectly seasoned sphere of beef, herbs and milk-soaked bread (our server dished on the secret to their tender texture). Covered in simple tomato sauce and shaved Parmesan cheese, these were a bite of pure comfort.

The only problem is that they were out of them on one of my visits. This happens — but the restaurant was also out of the spinach-artichoke cheesecake appetizer and all but two (out of approximately ten) red wine offerings on both visits. The food was good enough that the missing pieces warranted only a semi-raised eyebrow.

Thirdkill openly admits that he is still learning how to run a restaurant, and that snafus like that hole-ridden wine list are the growing pains of a first-time restaurateur. He shouldn't be so hard on himself. He has the tough part down — a thoughtful, well-executed repertoire of offerings that provides a refreshing and unexpected take on a ubiquitous dish. When you can provide that, the sky is the limit.