Confessions Of A South Side Chicken Farmer 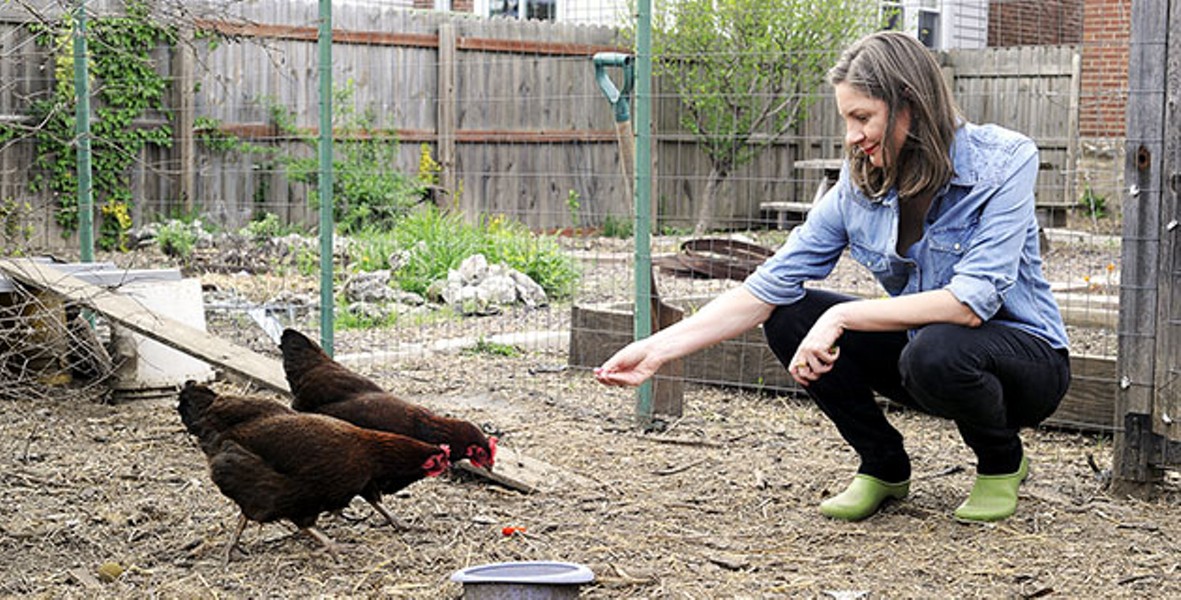 PHOTO BY KELLY GLUECK The writer's partner, Amy Van Donsel, with some of their fowl friends.

My neighbor Tabari Coleman is the kind of solid citizen you want to live next door to you for, like, forever. But when he's ringing the doorbell at six in the morning, it's generally because of an emergency. Maybe a fire. Another neighbor being wheeled out of his home by EMS workers. Or, more realistically — and more frequently — one of my chickens is running around his yard, or has wound up confused in a tree in front of his bedroom window.

For the past four years and change, I've raised chickens. Usually four at time, though you often wind up buying one or two more than that, thanks to heavy attrition (opossums, hawks, owls, even simple sicknesses). And the flock I recently bought of four Icelandic chickens meant housing for the first time a group that was genetically predisposed to, quite literally, flying the coop. Because I live right in the heart of the city, in Tower Grove East, that means it's not just me who's left dealing with the fallout.

On this morning, the fallout was noisy. When distressed, various breeds of hens can hit an internal emergency switch, their usual goofy cackling turning into a harsh rooster-like crow. Somehow, this Icie had managed to hide from me when I locked her sister hens into their coop at night, and at some point before sunset, she'd cleared both a fence and a gate to make it to Tabari's yard. By the early hours of the morning, she was frantic.

Hastily pulling on some jeans, but still barefoot, I walked over to the blossoming tree and shook it for a few seconds. At that point, the panicked Icie made a beeline for a house across the street, sticking the windowsill landing after her 80-foot flight with more than a little bit of grace.

Maybe tired, maybe stressed, the Icie just sat there for a few seconds. I raced over and scooped her up, thanked her for not moving again, profusely apologized to Tabari and walked the bird through my backyard. And that's when I noticed the next problem I'd have to deal with: at least three football-sized holes had just been dug into our raised vegetable beds.

If you didn't think that backyard chickens could fly straight, far and fast, well, I didn't know that either; after all, 21 previous birds had never done so. Nor did I know chickens were capable of making such big holes in a vegetable garden. But my acquisition of Icelandic chickens last fall changed a little of everything. Those holes have been a regular occurrence; escape attempts have been more common than I like to admit, too.

I first spotted the birds thanks to an ad on Craigslist, which I shared with my partner, Amy VanDonsel. She liked the birds' wildly divergent looks, full of varied colored patterns, and I couldn't disagree. Meeting the seller at the riding paddock of the Monroe County Fairgrounds, there was no way to buy just a couple of these wacky-looking pullets, so we took all four and drove back to the city with Sigur Ros as our soundtrack.

Even before laying eyes on them, they seemed a nice, fun fit. (Turns out they're something called a "landrace," rather than a breed.) These are chickens that lay eggs for you on a daily basis, yes. But they're also able to lay in the winter, when sunlight is scarce, and are overall better equipped to tackle extreme cold. They're curious foragers, constantly looking for escape hatches and ways to supplement their diet. They've grown into different sizes and have wildly different color variations, slightly smaller and more athletic and agile than the birds you normally see in urban flocks. For good reason, backyard flocks tend to come from simpler, plainer breeds like Orpingtons, Rhode Island reds, barred rocks and sexlinks, the base hens of Amy's and my previous flocks.

This choice to take on Icelandics proved tricky. The chicken yard fence kept getting taller, a combination of chicken wire, fishing lines and random sticks. And yet these birds were constantly up to something: laying eggs in the garage, spending days (and nights) away from the coop, generally acting a bit more adventurous than the average urban chicken should. Articles, books and online chicken groups might suggest that Icies aren't the perfect birds for a city flock, but you never really, truly know that until you see one cross a city street, eight feet off the ground, wings flapping furiously, to the sound of thwok-thwok-thwok.

This bird woke my neighbor, who woke me. It was starting to feel like something had to give.