It's not just service men and women traumatized by Military Sexual Assault. Their families, too, pay the price 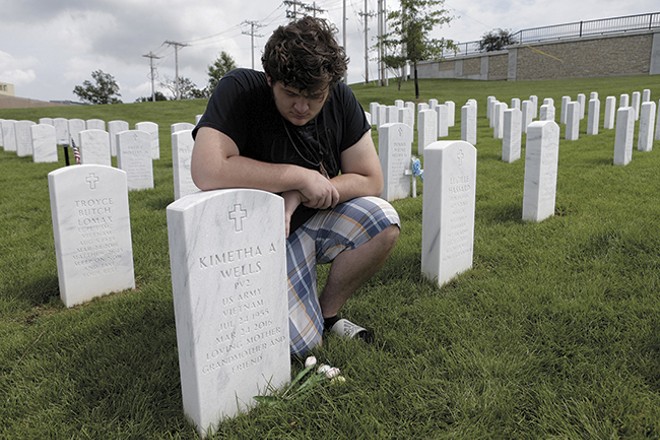 At Jefferson Barracks National Cemetery in south St. Louis County, a headstone sits on a hill overlooking a far corner of the grounds.

The headstone houses an urn containing the ashes of Kimetha "Kim" Wells, of Belleville.

Wells passed away after suffering a heart attack in March 2016. She was 60.

A year after her passing, her son Ian Boyer describes Wells as a woman who coped with a long list of challenges stemming from the central trauma of her life: In the early 1970s, soon after joining the Army, Wells was raped by a fellow soldier at a training base in Massachusetts. Wells kept it a secret for most of her life, only disclosing it to her children after deciding she could not endure the pain any longer — at least not on her own. Her children needed to know.

When his mother disclosed the rape, it was like all the jumbled bits of a puzzle fell together, says Boyer, now twenty.

"I lived my life wondering why my mom was so different than the other parents, and why she wasn't normal," Boyer explains. "There were just a lot of weird things that she did. It really opened my eyes when I found out what happened."

Boyer visited Jefferson Barracks on March 24, 2017 — the one-year anniversary of his mother's death. He did not cry when he visited the grave site.

"When I went there, I really had the feeling of needing to be stronger for her, really," he says.

In the years before her death, Wells spoke at length about the rape and how it affected so much of her life afterward — a long narrative of challenges and travails marked by drug and alcohol problems, mental health and financial crises, and conflicts with the two sets of children she raised with two different husbands.

But even when her drug and alcohol use were at their worst, her children remained her primary focus, Wells said.

"I always thought about them," Wells said. "They didn't know it, which is why they are always angry. They were always the primary focus, but they didn't think they were." 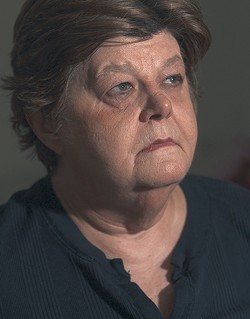 I first met Kim Wells in December 1999, while working as a reporter for the Belleville News-Democrat. Her second husband, Mike Boyer, had been murdered during a carjacking outside the nightclub where he worked as a security guard. East St. Louis Police had recently arrested his killer.

I had gone to the trailer park in Caseyville, Illinois, where the murder victim's widow — Wells — lived with her two small children, Ian, then two, and his baby sister. I wanted to interview Wells about how her husband's murder had affected her and her family. I remember that I came bearing gifts: a pair of stuffed bears for the kids bought at a nearby Target. And I remember the look in Kim's eyes when I first met her: an oceanic sadness so deep, so pervasive, I began thinking of my own toddler son, who was almost Ian's age. I stifled a sudden urge to begin sobbing.

And yet, when she answered the door and led me into her tiny trailer, the smile Wells pulled together made me feel at home immediately.

¨Hi, Mike," she said in a voice that almost convinced me we'd been friends forever. "Welcome."

Flash-forward thirteen years. By this point I was working as the military affairs reporter for the News-Democrat, and the issue of sexual assault in the U.S. military was starting to generate a lot of headlines. It had become the focus of debate in Congress, even as momentum was building to allow women to take on frontline combat jobs. I wanted to localize this story for our readers. So I contacted a friend who worked with veterans seeking VA benefits. He got me in touch with Wells, who again agreed to an interview.

The years rolled by. I'd work on the story about MST, then put it aside, then work on it again. Other stories got in the way, as well as things in my own life, and my MST story remained on the backburner.

By the summer of 2016, however, I had decided to quit the News-Democrat, but before I left I pounded out my MST story and turned it in to my editors.

It was not to be. The editors said the story had problems and they couldn't publish it in the form I had written it. I accepted their verdict and moved on with my life.

At least that's what I thought. But my unfinished MST story gnawed at me. I began feeling guilty. I knew I owed it to the people I had interviewed, especially the women who had come forward, to finish the story and get it published. Simple decency dictated as much. They had wrestled demons far worse than any I had ever known to tell their stories to the world. The least I could do was serve as a conduit for sharing them.